This post may contain affiliate links. If you make a purchase, My Modern Met may earn an affiliate commission. Please read our disclosure for more info.

It can take years for aspiring authors to finally see their work on the shelves of bookstores and in front of potential readers. But one young writer skipped all the conventional methods of publishing and took his manuscript straight from his pen to the stacks of his local public library. An 8-year-old named Dillon Helbig has been writing and illustrating his own stories since he was 5, and he’s wanted to see one of his books by him on the library’s shelves for just as long. So, when he finished his latest tale of him —The Adventures of Dillon Helbig’s Crismis—he just knew he had to share it. What’s more, he knew exactly how.

Dillon decided to “self-publish” his book—but in his own way. So, during a visit with his grandmother to the Lake Hazel branch of the Ada Community Library in Boise, Idaho, he smuggled in the only copy of his 81-page story. He’d just written and illustrated it by hand, over the course of only a few days’ time, in a red-bound notebook his grandma had gifted him. Its pages detail the adventures that take place after the star on top of Dillon’s Christmas tree explodes and he is transported through a portal to various locations in time and space, like the first Thanksgiving and the North Pole.

“I always be sneaky, like how I get chocolate,” he told a local news agency when asked about his master plan. “There was a lot of librarians that I had to sneak past, so do you know what I did?…I covered up this part and covered the back with my body and just snuck it in.” Once he’d gotten past the librarians, Dillon slipped his novel right in between two other library books on one of the fiction shelves.

The crafty novelist even included official-looking labels on the volume’s red cover and spine with the book’s title and the author, “Dillon His Self.” These came in handy when Dillon’s mom called the public library a day or two later looking for the book after the resourceful young author confessed his flawless undercover operation. “His parents of him were worried we would find his book of him and we would get rid of it,” said Lake Hazel Library branch manager Alex Hartman. “Which was an unfounded fear because if there’s ever a place a book would be safe, it would be here.” 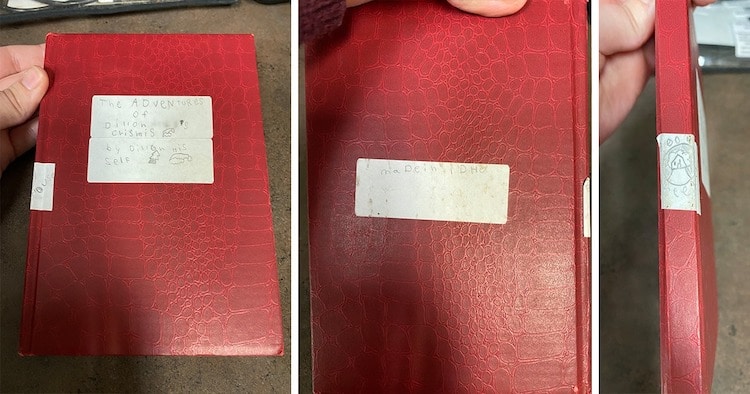 In fact, Hartman and his coworkers had found the book in the “stories” section and read it, even sharing it with Hartman’s 6-year-old son. And far from wanting to get rid of it, they absolutely loved the entertaining holiday tale and agreed that Dillon’s book met all the criteria for a book the library might include in its collection. So, with the permission of Dillon and his parents of him, they processed the book, gave it a barcode, and made it an official addition to their shelves as part of the graphic-novels section. Now anyone can check out and read Dillon’s incredible self-published children’s book.

With all the attention the book has been getting, they’re hoping that Dillon’s creativity will also inspire other young kids to try their hands at storytelling. A local children’s writer named Cristianne Lane has even proposed leading a writing workshop with Dillon at the public library. “We’re just hoping that…children find inspiration to write their own stories and share those with other people,” Hartman said. “I just think it’s a good demonstration to share with other kids.”

The library even honored Dillon with its first-ever Whoodini Award—named after the library’s owl mascot—for Best Young Novelist. And it’s well-deserved because, since its discovery, The Adventures of Dillon Helbig’s Crismis has garnered so much acclaim that, by the end of January, it had 56 people on the library’s waiting list to check it out. And if each borrower were to keep the book for the maximum four-week lending period, then the last person on the list would have to wait almost four and a half years to get their hands on the only copy. Now, the waitlist is up to 120. But Hartman has been talking to Dillon and his parents about him about possibly creating a digital version so that more people can access the thrilling tale.

With this early success, Dillon now has even bigger plans in the works. His mom said that he has decided to become an author when he grows up, and he’s already mapping out his career. “I’m going to stop writing when I’m 40,” Dillon says, adding that after that, he’ll probably switch to game creation. But, in the meantime, the young author has already begun on a sequel to his first self-published children’s book by him. This time, it will feature his dog, Rusty, and a special visit from the Grinch. He’s also working on another book, a story based on “actual events” which he says will be called The Jacket-Eating Closet. So keep your eyes peeled for what’s next from this imaginative young writer.

This 8-year-old writer self-published his own children’s book by putting it right on his public library’s shelves.

All images via Ada Community Library.