Possibly the only English football club run mostly by black staff is Queens Park Rangers, in the Championship, the English game’s second tier.

QPR’s director of football, Les Ferdinand, and technical director, Chris Ramsey, have spent their entire careers in the sport watching hiring discrimination persist almost everywhere else. Teams have knelt in protest against racism, but Ferdinand says, “I didn’t want to see people taking the knee. I just wanted to see action. I’m tired of all these gestures.”

Now a newly founded group, the Black Footballers Partnership (BFP), argues that it is time to adopt compulsory hiring quotas for minorities. Voluntary measures have not worked, says its executive director, Delroy Corinaldi.

The BFP has commissioned a report from Stefan Szymanski (economics professor at the University of Michigan, and my co-author on the book Soccernomics) to document apparent discrimination in coaching, executive and scouting jobs.

It is a dogma of football that these roles must be filled by ex-players — but only, it seems, by white ones. Last year 43 per cent of players in the Premier League were black, yet black people held “only 4.4 per cent of managerial positions, usually taken by former players” and 1.6 per cent of “executive, leadership and ownership positions”, writes Szymanski.

Today 14 per cent of holders of the highest coaching badge in England, the Uefa Pro Licence, are black, but they too confront prejudice. Looking ahead, the paucity of black scouts and junior coaches is keeping the pipeline for bigger jobs overwhelmingly white. Corinaldi hopes that current black footballers will follow England’s forward Raheem Sterling in calling for more off-field representation.

There have been 28 black managers in the English game since the Football League was founded in 1888, Corinaldi calculates. As for the Premier League, which has had 11 black managers in 30 years, he says: “Sam Allardyce [an ex-England manager] you have had nearly as many roles as the whole black population.” The situation is similar in women’s football, says former England international Anita Asante.

Ramsey, who entered coaching in the late 1980s, when he says “there were literally no black coaches”, reflects: “There’s always a dream that you’re going to make the highest level, so naively you coach believing that your talent will get you there, but very early on I realized that wasn’t going to happen.”

He says discrimination in hiring is always unspoken: “People hide behind politically correct language. They will take a knee, and say, ‘I’m all for it’. You’re just never really seen as able to do the job. And then people sometimes employ people less qualified than you. Plenty of white managers have failed, and I just want to have the opportunity to be as bad as them, and to be given an opportunity again. You don’t want to have to be better just because you’re black.”

When Ferdinand’s glittering playing career ended, he worried that studying for his coaching badges might “waste five years of my life”, given that the white men running clubs were reluctant to hire even famous black ex-players such as John Barnes and Paul Ince. In Ferdinand’s first seven years on the market, he was offered one managerial job. “People tend to employ what looks, sounds and acts like them,” he shrugs. Yet he says he isn’t angry: “Anger’s not the right word, because that’s unfortunately how they see a lot of young black men, as angry.”

He suspects QPR hired him in part because its then co-chair, the Malaysian Tony Fernandes, is a person of colour. After the two men met and began talking, Ferdinand recalls, “he said, ‘Why are you not doing this job [management] in football?’ I said, ‘Because I’ve not been given the opportunity.’ The conversations went from there. Had he not been a person of colour, I perhaps wouldn’t have had the opportunity to talk to him in the way that I did.”

Szymanski can identify only two black owners in English football, both at small clubs: Ben Robinson of Burton Albion, and Ryan Giggs, co-owner of Salford City.

We are expected to accept as minority coaches that these things take a long time. I have seen this train move along so slowly that it’s ridiculous

Szymanski believes discrimination persists for managerial jobs in part because football managers have little impact on team performance — much less than is commonly thought. He calculates that over 10 seasons, the average correlation between a club’s wage bill for players and its league position exceeds 90 per cent. If the quality of players determines results almost by itself, then managers are relatively insignificant, and so clubs can continue to hire the stereotype manager — a white male ex-player aged between 35 and 55 — without harming their on-field performance.

For about 20 years, English football has launched various fruitless attempts to address discrimination. Ramsey recalls the Football Association — the national governing body — inviting black ex-players to “observe” training sessions. He marvels: “You’re talking about qualified people with full badges standing and watching people train. And most of them have been in the game longer than the people they’re watching.”

Modest though that initiative was, Ferdinand recalls warning FA officials: “A certain amount of people at St George’s Park [the FA’s National Football Centre], when you tell them this is the initiative, their eyes will be rolling and thinking, ‘Here we go, we’re doing something for them again, we’re trying to give them another opportunity.’ What those people don’t realize is: we don’t get opportunities.”

After the NFL of American gridiron football introduced the Rooney Rule in 2003, requiring teams to interview minority candidates for job openings, the English ex-player Ricky Hill presented the idea to the League Managers Association. Ramsey recalls, “Everyone said, ‘God, this is brilliant’.” Yet only in the 2016/2017 season did 10 smaller English clubs even pilot the Rooney Rule. Ramsey says: “We are expected to accept as minority coaches that these things take a long time. I have seen this train move along so slowly that it’s ridiculous.” He mourns the black managerial careers lost in the wait. 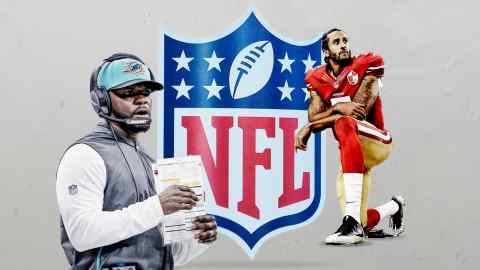 In 2019 the Rooney Rule was made mandatory in the three lower tiers of English professional football, though not in the Premier League or anywhere else in Europe. Clubs had to interview at least one black, Asian or minority ethnic (Bame) candidate (if any applied) for all first team managerial, coaching and youth development roles. Why didn’t the rule noticeably increase minority hiring? Ferdinand replies, “Because there’s nobody being held accountable to it. What is the Rooney Rule? You give someone the opportunity to come through the door and talk.” Moreover, English football’s version of the rule has a significant loophole: clubs are exempt if they interview only one candidate, typically someone found through the white old boys’ network.

Nor has the Rooney Rule made much difference in the NFL. In 2020, 57.5 per cent of the league’s players were black, but today only two out of 32 head coaches are, while one other identifies as multiracial. This month, the former Miami Dolphins coach Brian Flores filed a lawsuit against the NFL and three clubs, accusing them of racist and discriminatory practices. He and other black coaches report being called for sham interviews for jobs that have already been filled, as teams tick the Rooney Rule’s boxes.

In 2020 England’s FA adopted a voluntary “Football Leadership Diversity Code”. Only about half of English professional clubs signed it. They committed to achieving percentage targets for Bame people among new hires: 15 per cent for senior leadership and team operations positions, and 25 per cent for men’s coaching — “a discrepancy in goals that itself reflects the problem”, comments Szymanski. Clubs were further allowed to water down these targets “based on local demographics”.

The FA said: “The FA is deeply committed to ensuring the diversity of those playing and coaching within English football is truly reflective of our modern society.

“We’re focused on increasing the number of, and ongoing support for, coaches who have been historically under-represented in the game. This includes a bursary program for the Uefa qualifications required to coach in academy and senior professional football.”

A report last November showed mixed results. Many clubs had missed the code’s targets, with several Premier League clubs reporting zero diversity hires. On the other hand, more than 20 per cent of new hires in men’s football were of Bame origin, which was at least well above historical hiring rates.

Do clubs take the code seriously? Ferdinand smiles ironically: “From day one I didn’t take it seriously. Because it’s a voluntary code. What’s the repercussions if you don’t follow the voluntary code? No one will say anything, no one will do anything about it.”

The BFP and the League Managers Association have called for the code’s targets to be made compulsory. Ferdinand cites the example of countries that set mandatory quotas for women on corporate boards of listed companies.

Asante says it takes minorities in positions of power to understand the problems of minorities. “If you are a majority in any group, when are you ever thinking about the needs of others?” Corinaldi adds: “When you have a monoculture in any boardroom, you only know what you know, and it tends to be the same stories you heard growing up.” He predicts that once football has more black directors and senior executives, they will hire more diversely.

The BFP’s model for English football is the National Basketball Association in the US, a 30-team league with 14 African-American head coaches. For now, that feels like a distant utopia. Ramsey warns: “If there is no revolutionary action, we’ll be having this same conversation in 10 years’ time.” And he remembers saying exactly those words 10 years ago.