The cover of the English edition

Author Wang Kanyu was once asked at a reading event: “Why are you writing science fiction? You seem to focus so much on emotions. Why not just write romance novels?”

Wang may just answer those questions with a new book she co-edited – “The Way Spring Arrives and Other Stories.”

The anthology includes 17 science fiction and fantasy stories from 15 Chinese female authors who explore diverse subjects and exhibit different styles. The work is supported by a team of female and “non-binary” translators, essayists, editors, designers and artists.

It is a rare project of international collaboration in Chinese literature.

Tor published Chinese sci-fi writer Liu Cixin’s “The Three-Body Problem” in 2014, which became the first Asian novel to win a Hugo Award for best novel and later went on to great success worldwide.

The publisher has since introduced more Chinese authors in science-fiction and fantasy to the US market.

“We got on the topic of international translation, lamenting the feeling of an ‘old boys’ club’ that pervaded the Chinese science fiction market in the US,” Hall, a senior editor at Tor, told Shanghai Daily via email. “It was one that we didn’t think reflected the true range of incredible work being written in China or make it available to English language readers.”

Wang said she found the discussion exciting because she was confident about the diversity and quality of works by female authors in science fiction and fantasy in China.

“If you look at the tables of contents of many books, they are often all-male or mostly male,” she said. “It’s not necessarily discrimination, but females were overlooked.” She added, “That is changing, along with social attitudes regarding gender issues and the prosperity of science fiction as a genre in China.”

More women are emerging among new authors, literary prize winners and in the publishing realm in general. The Chinese Nebula Awards, one of the most-acclaimed for science fiction writers in the Chinese language, had renowned cultural critic and literature professor Dai Jinhua heading the seven-member jury last year. Six of the seven jury members were women. 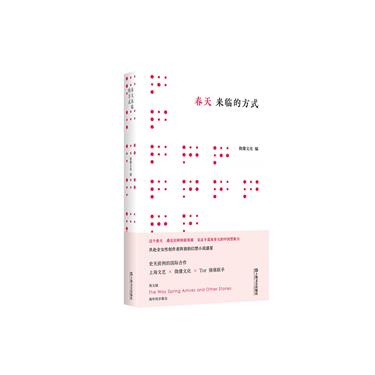 The cover of the anthology in Chinese

Gu Shi, winner of the best short story award, said at a recent seminar that it is important to have women in editorial positions and on jury panels.

“Female authors and their works can be easily overlooked if you don’t have enough women on juries or in editorial positions,” she said.

“Personally, I do feel the responsibility of writing more powerful female characters, so that when younger readers read Chinese science fiction, they find women as architects, urban planners, writers, scientists, astronauts,” she said. “People who can explore the universe and change the world. I see that as a responsibility of female authors.”

Gu, an urban planner, started writing science fiction in 2011. Her short story “To Procure Jade” is included in “The Way Spring Arrives and Other Stories.”

Half of the selections in the new anthology are works written in the last five years. The oldest entry is a work from 2002, when “science fiction was still considered children’s literature in China,” according to Wang.

Chinese editors Wang and Yu Chen focus on finding good stories that will not be lost in translation, despite social and cultural nuances and subtexts. American editors Hall and Chen said they are proud of the diversity – everything from alien histories to martial arts and contemporary fantasy.

“Since so much of what has crossed over into the North American market from China has been hard science fiction, we were excited to expand the number of subgenres represented in the collection,” said Chen.

The editors said they have confidence in the quality of the translations and are encouraged by the changing tastes of readers.

“Liu Cixin’s ‘The Three-Body Problem’ opened the floodgates,” Hall said. “But interest in international speculative fiction has been building for a long time.”

She added, “With award-winning writers launching works into the North American market, we are seeing that hunger grow. While there are certainly differences between the two markets, we are finding that our readership is increasingly global rather than local.”

Wang cites a few stories in the anthology as examples.

In “The Portrait,” the author reconstructs a familiar Chinese ghost tale and overturns the traditional narrative structure into a new fantasy story.

“So foreign readers who are not familiar with these kinds of traditional subjects can enjoy it as a good new story, and those who know the old tale can enjoy an extra layer,” she said.

“I used to write in what people would call ‘translation style’ because I grew up reading and watching sci-fi in translations,” said Gu.

“But then when you go abroad, you are asked about the identity of you and your works,” she said. “The only way is to go back to your own cultural roots to explore.”