The movie After-Yang is not your standard science fiction flick. It is minimalist in its depiction of technology, centering on family and memory as opposed to the flashy gadgets of its future. Written and directed by the video essayist turned filmmaker Kogonada, it is not only getting a wide release this weekend but showing as part of this year’s Seattle Asian American Film Festival.

Notably, the film has a wondrous score by composer Aska Matsumiya that perfectly complements its low-fi sci-fi world. If you are n’t familiar with her work from her, you best fix that ASAP. You can hear her from her eclectic music from her in the underrated coming-of-age film Selah and the Spadesas part of a vibrant twist on the crime drama I’m Your Womanin the masterful 37 Secondsand in both season one and two of the regrettably short-lived HBO series Betty.

With After-Yang, the composer is taking on something fresh by bringing to life a science fiction world that is as much about its people as it is about the technology they use. Before the film was released, I spoke with Matsumiya about her process of her, why she did not want to rely solely on synth, and what it was like working with Kogonada.

We’ve edited this interview for length and clarity.

HUTCHINSON: What drew you to a science fiction feature film like this?

ASKA: It was my first. I was just brought on to the project after the director contacted me. I first joined it not because it was science fiction but because I really connected with Kogonada as a person. I really felt like I could translate the feeling that he wanted to capture with music. I immediately felt very close to him.

Did you listen to the score for his previous film, columbus? What was your collaborative process like overall?

I didn’t listen to Columbus. I think it’s one of those things that with, I call him K, with KI think that it’s one of my skills is to be able to translate music when we are speaking about themes. It’s like an instinct or intuition. We didn’t talk so much about what kind of music we wanted to create except for the fact that I think we both agreed that, because it’s science fiction, we didn’t want to do an obvious science fiction score. We actually wanted to do the opposite, which was to be more human. That was the concept that we had. So I brought in lots of wooden, warm instruments like piano, marimbas, and cello. Something that felt human, and then I mixed it with synth. Then we also ended up exploring lots of the scores in the AI ​​plug-in, but I wanted to make sure that the human part was something that translated with the score.

When you talk about wanting to go away from the obvious science fiction score, I think of compositions that just sort of hammer you with synth and call it a day. Can you break down how you worked to make the score more varied and expansive?

The main theme is written with piano; it’s like processed piano, though the source comes from the piano. Then there were lots of marimbas. I was going through this phase where I was obsessed with marimbas and xylophones. All the textural stuff I created, like the atmospheric stuff, I created with these marimbas because I thought that it would create this warm texture to this world with robots. Then I mixed with synth.

Then there was the cello which is played by this Icelandic cello player Gyða Valtýsdóttir. It’s really difficult to play cello really quietly because the quieter you play, the more control you have to have. So it’s easier to play something loud, you know? But when you play really quietly, everything shows. Every touch, every texture, every single thing, so you have to have control. She is one of the cello players who are capable of doing that. I had her de ella play de ella really, really quietly so I could hear every touch of her de ella playing the cello and that was very important to me for the score was to have the human touch.

Yeah, I remember KEXP had posted a video of her performing a while back, and it was incredible. Had you both worked together before?

Yeah, I had worked together with her on many different projects. She’s like my favorite cello player. I had actually first known her when she was on the cover of a Belle & Sebastian record where the girl is looking at another girl because she has a twin. I grew up listening to this record, looking at her every day, and kind of being obsessed with her image of her. Then she was in this Icelandic band Múm which I also loved. Then, later, she also ended up being friends with many of my collaborators. So I reconnected with her and it kind of all tied in together.

That’s quite a connection to find someone so memorable from your growing up and then getting to work on this score together.

When it comes to how you compose, do you watch the film and try to make it connect with the cut? Or do you work independently?

It kind of depends on the film, but for this film, he already had a cut. I like to watch it and live in the feeling of the film. To create something from the tracing of the feeling rather than watching and writing.

I hesitate to even say this phrase, but was there temp music on the cut you saw or was it a blank canvas for you to get to work from?

They didn’t have temp music. I really hate working with temp music because I feel like when you listen to temp music, it’s already limiting what could be created. Even if people put temp music, I don’t ever listen. I ignore them [laughs].

Yeah, it can be restraining to have something married to the image when you just would rather start fresh and get away from all that.

It does also feel like, if you’re working off of something that’s created already, you’re never going to make anything new. I feel like there is no point.

When it comes to what you were talking about with wanting to emphasize how the science fiction aspect was very human, what was your takeaway from the film’s central themes and your overall score?

That was the concept that we had talked about from the beginning. After-Yang takes place in the future, but it’s not like the typical sci-fi where there is a conflict between technology and humans. What is unique about this film is that they coexist in this harmony. Even within this, you’re developing emotions with the…I don’t know what…did you watch the film?

Yes, I have. I saw it at Sundance.

I don’t know what Yang is. He’s not a robot, but what do they call it?

yeah android. I feel like in that respect, it’s a very new perspective on how we will coexist with technology. I wanted to also integrate that into music.

It sounds like the creative process of the film was really fulfilling. Do you hope to work with Kogonada again on another film like this? With COVID, did you get to meet him in person and work together often?

Yeah, we worked together in person many times and I really would love to work on something. He was amazing, so pleasant to work with. The whole process with him felt very truly, purely creative in this way that was really beautiful. It was one of the best experiences I’ve had collaborating with someone. I would love to work with him again. 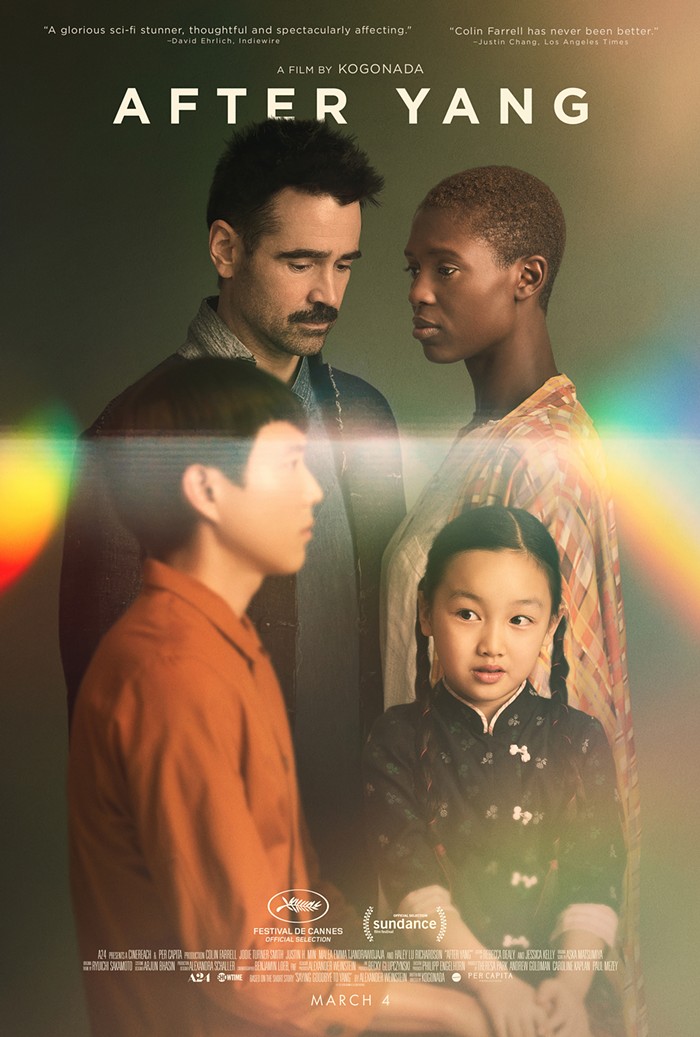 you can see After-Yang starting March 3 in theaters and on Showtime, as well as at the Seattle Asian American Film Festival’s Northwest Film Forum screening on March 6.