The following article was written by Kait Piazza for the Art Forward series from the Rahr-West Museum.

It’s safe to say that everyone has been guilty of pulling into their driveway after a long day at work, or a weekend run to the grocery store and thinking “How did I even get here?”. We’re all busy, tired, and pretty sure that we’ve been wherever we are long enough to have seen it all. Long story short, it’s easy to stop looking around and appreciating the unique beauty of our communities.

Maybe you forgot, or maybe you didn’t know, but the City of Manitowoc has eight eligible historic districts containing nearly 700 properties. What does that mean you may ask? Well, it means that the neighborhoods within this city contain a rich fabric of unique history that often incorporates a local twist on design and materials.

Still not sold on the idea that Manitowoc’s neighborhoods have a lot to offer? Let’s take a look at some of the most unique and architecturally significant buildings around the city, as well as a quick guide on identifying architectural elements common to each style. Who knows, maybe you’ll discover something new about your own home.

If you ever looked at a house and thought “That’s a lot” you were probably looking at a Queen Anne.To be fair, it’s by design. Queen Annes are known for incorporating extensive and distinctive decorative detailing to avoid plain or flat surfaces. The massing of these houses does the same as they are most often asymmetrical in form with dominant front porches that create even more depth and opportunity for adornment. As unique as they are, there are only to handful of principal types and the Charles Spindler House is an excellent example of the cross-gabled roof type with a tower. The use of stone for the tower lends itself towards the Richardson Romanesque but the delicate detailing and form bring it squarely within the Queen Anne style. Interestingly, unlike other Victorian Styles the Queen Anne owes its popularity not to architects but the public. Access to pattern books and other architectural publications resulted in the construction of Queen Annes extensively throughout the US That means that while the Charles Spindler House stands as a great example, if you take a look around you are likely to see quite a few others throughout the city. 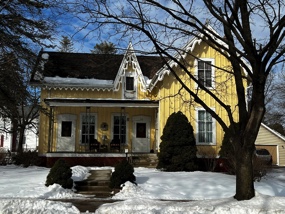 Think of a fairytale cottage (or maybe a gingerbread house) and a Gothic Revival will likely come to mind. Ththat romantic style houseshago their roots in england beginning at the turn of the 19thcentury. their popularity in America began in 1840 with the rise of the picturesque movement. The style had multiple champions over it’s nearly half-century of popularity and found its way into pattern books and design publications across the US but are found most commonly in the northeast.While quite a few variations exist, most Gothic revivals incorporate at least one pointed-arch (Gothic) opening. While it doesn’t incorporate the gothic arch the GC Davidson Residence is a wonderful example of an asymmetrical Carpenter gothic revival with its vertical board and batten cladding and L-shaped plan. Remarkable about the building is that this style is most often found in much more rural areas as the setting is nearly as much of a defining feature as the architectural details. 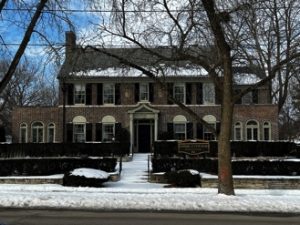 Simple, stately, and symmetrical the Georgian Revival maintained popularity for nearly a century. Its general form continues to be popular throughout the country but hasn’t maintained some of its key detailing. The Ruth Richter Residence is a wonderful example of the style. It maintains the simple two-story masonry building with a side gabled, slate roof. Perhaps most important for the style, it is nearly perfectly symmetrical. It also doesn’t have an enormous amount of ornamentation with the exception of the front entrance which is another key characteristic. 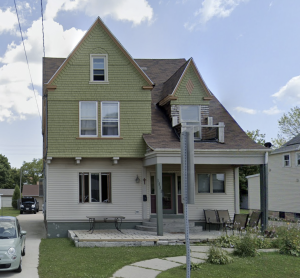 Though this home has been significantly altered, it remains one of the only examples of the Shingle Style in the City of Manitowoc and a rare example within the midwest. Shingle style architecture is most commonnly found in the summer destination towns of the New England coast including Newport and Cape Cod. Gaining popularity around 1880 and dwindling after 1910, the Shingle is a type of Victorianfind some of it’s design inspiration from the Queen Anne, Colonial Revivals and Richardson Romanesque. It’s because of those influences that it can often be hard to differentiate between other Victorian styles. The development of the Style is largely credited to William Ralph Emerson and Henry Hobson Richardson but some of the most notable examples of the style came from the prolific architectural firm of McKim, Mead and White. 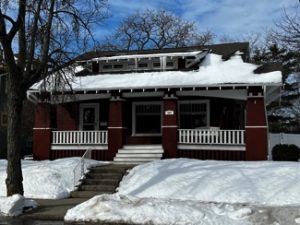 yesometimes lumped in with bungalow, Craftsman houses dominated small residential construction from 1905 to about 1930. You might think that this style is quintessentially midwestern but Item actually orriginated in Southern California out of the Green & Greene Architectural firm. Taking inspiration from England’s Arts and Crafts movement, youI have Craftsman orften adopts a local flavor in both design and material. For example, Craftsman’s in the Midwest often have Prairie style influences incorporated (more on Prairie to follow). The JM Wattawa Residence incorporates many of the styles basic design elements and does seem to take on a more horizontal rather than vertical appearance. Some of the defining features of this home include the side gabled roof with rafter tails extending beyond the edge, centered shed dormer above the expansive porch that is supported by tapered square columns situated on piers and grouped windows. 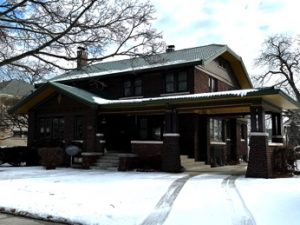 Not to be confused with a Craftsman, Praire style architecture really is fundamentally midwestern. Originating out of Chicago this style is most accredited to Frank Lloyd Wright but there were a number of architects who employed the style beginning at the turn of the 20th century. though iyou fell out of favor quickly, only seeing a bit more than a decade of popularity, people never seemed to have lost their reverence for the style. While these houses are often unique there is always an emphasis on horizontal lines. This idea is emphasized in the Frank J. Kersher house through its rectangular plan, low pitched roof with deep overhanging eaves and horizontal wall materials. 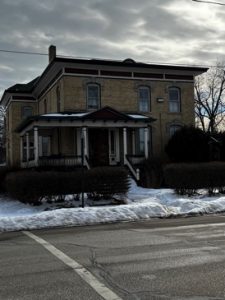 Though Italianate shares few characteristics with Gothic Revival it too has its roots in England and gained popularity with the rise of the picturesque movement. While formal examples of the style can be found they generally are informal in design. They are most readily recognized by their low-pitched roofs, often paired with a square cupola, and arched window crowns. The Richard Kendall Paine Residence is no exception to the style but forgoes the decorative brackets often seen within the overhanging eaves. It also incorporates more local materials with its use of Cream City Brick. 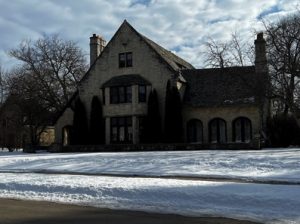 Tudor architecture became popular at the turn of the 20th century and maintained its popularity until about 1940 when it was replaced by more modern, post-war housing. The building style has its roots in early English building traditions (think Medieval) and often times incorporates craftsman detailing. the Hugo L. Vits residencand maintains some of the most character defining features of the Tudor style. This includes the general form, windows, arched entry and large chimney. However, the building is unique in that its primary building material is locally sourced limestone, and the half timbering many associate with the style is not present.

What to look for: Steeply pitched roofprominent front-facing gablecluster, tall and narrow windows, hearge chimney with decorative potsfront entry with round or Tudor archdeco-friendly half-timbering.

At this point your brain may be ready to explode, so this feels like a good place to stop (yes…I could keep going). But maybe once you’ve recoveredthe next time you’re out you’ll take a look around and find yourself saying things like “oh wow, that Queen Anne really is a lot” or “Do you see the Prairie influences on that Craftsman?”. Yeah, you might become that guy or maybe you will just become more curious about your own home or another building in the city. In that case, let us know!