Click here to stay tuned with our live updates on Ukraine tensions.

False claims targeting China have seen a new wave of proliferation after the outbreak of the Russia-Ukraine conflict, as the Global Times discovers that the usual suspects in the disinformation war – senior US officials, Western media outlets, internet trolls from the island of Taiwan – have ganged up to campaign against and scapegoat China.

This disinformation campaign relies on anonymous information sources or conjecture to derive pre-assumed conclusions from Western countries led by the US. The Western media then develop them as a “sensational scoop,” and exaggerate extreme remarks by some Chinese internet users or biased comments of the potential internet trolls, or “online water army.” It is then generalized as being indicative of a wider “Chinese stance” to create confrontation while ignoring the repeated impartial voice of the Chinese government.

Typical smears include “China foresaw Russia’s plan,” “China is the biggest beneficiary of the Russia-Ukraine conflicts,” “[the island of] Taiwan is the next Ukraine,” or “China wants to bring in women fleeing Ukraine.”

The US-led public opinion war is systematic, with elaborate strategies, and involves the participation of forces representing the interests of the military-industrial complex, politicians or commercial organizations, Li Haidong, a professor from the Institute of International Relations at the China Foreign Affairs University in Beijing, told the Global Times.

Those forces, represented by US media and politicians to play the game of the public opinion, have been good at hyping sensational events to blow the minds of the public and using inflammatory descriptions to bring the subjects they attack into a passive and helpless position among public opinion, the expert said.

Campaign collusion by US politicians and media

Citing “anonymous officials” and “Western intelligence reports,” various US media, including The New York Times, CNN, and the New York Post, hyped the allegations that “China asked Russia to delay the invasion until after the Winter Olympics” over the past weeks, while ignoring the clear-cut refutation made by Liu Pengyu, spokesperson of the Chinese Embassy in the US, in reply to the media claims.

The disinformation indicated that China had appraised Russia’s plans for Ukraine and asked Moscow not to act before the end of the Winter Olympics in a bid to accuse China of “standing with Russia.”

The New York Times report was immediately quoted by many US mainstream media, and it was repeatedly distorted and widely spread.

The Chinese Foreign Ministry refuted the reports and pointed out that the US side fabricated such disinformation to smear China.

Through various sources, the Global Times has found that the “anonymous officials” cited by the New York Times are from the National Security Council (NSC) of the White House.

Experts describe it as a coordinated campaign to spread disinformation by American politicians and media outlets.

The US has been disseminating disinformation about China on the Ukraine issue, with the attempt to shift blame, stoke confrontation and profit from the issue, Chinese Foreign Ministry Spokesperson Zhao Lijian said at a routine press conference on Wednesday. “The practice is despicable and malicious,” he noted.

Assuming that China knew of Russia’s planned military action is a deliberate discourse trap set up by US politicians and media to blame China for not having stopped it, and the West is passing the buck to China while covering up the strong provocations made by the West to agitate the conflict, said Wang Wen, executive dean of Chongyang Institute for Financial Studies at Renmin University of China.

The West’s presupposition implies Western intent to provoke China-Russia relations, as their logic is that if China did not know about the Russian action in advance, it reflects unstable bilateral ties, Wang noted.

There was clear evidence of a coordinated disinformation campaign in another New York Times’ piece on February 25 which, citing unnamed US officials, claimed that senior Biden administration officials held half a dozen urgent meetings over a period of three months with top Chinese officials in which the Americans presented intelligence on Russia’s troop buildup in the hopes that China would step in, but were repeatedly rebuffed.

Such report again made China the key to resolving the conflict between Russia and Ukraine. After the outbreak of the Russia-Ukraine war, many US officials speculated and fabricated rumors that the Chinese mainland would “reunify” the island of Taiwan by force while the Russia-Ukraine situation drew global attention and they began to play up the “China’s threats”. “to the Indo-Pacific region. Former US national security adviser Robert O’Brien and top US Air Force General Kenneth Wilsbach are typical of those joining the chorus.

O’Brien said in an interview with Fox News in late January that China is watching the development of the Russia-Ukraine conflict very carefully and considering whether to decide to “invade Taiwan” after the Winter Olympics and Paralympics.

Secessionist Taiwan politicians have not let go of the opportunity to spread rumors on the so-called joint effect of the island and Ukraine.

Wu Jaushieh, the island’s head of external affairs authority and a listed “stubborn Taiwan secessionist,” claimed that Taiwan is closely monitoring the Chinese mainland while “democratic countries” are busy dealing with the situation in Eastern Europe. Some media commentators in Taiwan said Wu’s remarks are ridiculous and aim to deliberately scare the people of Taiwan.

On February 16, Wilsbach publicly slandered China by claiming it could take advantage of the Ukraine crisis to “be provocative” in the Asia-Pacific.

“It won’t be surprising if they tried something that would maybe be provocative and see how the international community reacts,” Wilsbach said.

Though he did not go into specifics about what China might do during the Ukraine crisis, observers suggested he may allude to the reunification of the Chinese mainland with the island of Taiwan.

It is worth noting that not long ago, the Biden administration had attempted to hype a new round of alleged “China threats” to the Indo-Pacific region.

Such wild speculation from US politicians was echoed and followed by the Taiwan authorities.

While busy hyping Russia-Ukraine tensions and intentionally linking the Ukraine situation with the Taiwan region, the secessionist DPP authority smeared the Chinese mainland for “threatening” the island with what happened to Ukraine. On February 23, Taiwan-based news outlets including ETtoday ridiculously accused the mainland of “starting a cognitive warfare” against the island. That was no more than a thief crying “stop thief,” criticized mainland observers.

Media bluff of ‘Taiwan to be next Ukraine’

Turning a blind eye to the official stance on Russia-Ukraine tensions that China has repeatedly stressed, some Western media outlets, such as those from the US and Australia, are busy hyping the misinformation that China “supports” Russia’s military operations, observers found.

US media including the Associated Press (AP) and The New York Times, for instance, exaggerate extreme remarks or biased comments on the Russia-Ukraine crisis in their recent stories. By quoting only two ordinary Chinese individuals and generalizing their comments in a March 5 article, AP exaggeratedly said that Russian President Vladimir Putin “has vocal supporters in China.” Entitled “China seeks to unify public in support for Russia,” the article groundlessly accused Chinese authorities of urging its people to take Russia’s side.

Australian media ABC implied that China stands with Russia in the crisis by selectively citing comments by “experts.” In a Chinese-language article ABC published on March 7, it quoted Australia-based political commentators and scholars as saying that “China has never changed its pro-Russia stance” and “China gives secret support to Russia.”

Worse still, although China has openly stressed it opposes all actions that add fuel to the fire, readers found that some Indian and Western media describe China as a “beneficiary” of the Russia-Ukraine tensions by hyping the geopolitical or economic “interests” the tensions may bring to China.

The Hindustan Times called China “the winner” of the tensions in an article on March 2, saying that while the US and NATO are staring at Russia, Beijing “will get a free pass in the Indo-Pacific” and that it would even allow “its PLA to indulge in some adventurism regarding Taiwan.” The article was filled with conspiratorial accusations, including that the crisis will “only help the rise of China into an unrivaled superpower.”

US-funded propaganda machines like Voice of America (Chinese) and Radio Free Asia are also platforms for fermenting groundless accusations without firsthand investigations, such as Chinese students in Ukraine claiming to be Japanese, and of having poor protection and late evacuation by the Chinese government . Internet trolls from Taiwan behind rumors

During the Russia-Ukraine conflict, observers found that infiltration by Taiwan’s “internet water army,” who continuously publish false news and alarmist speculation, can be tracked across social media in the Chinese mainland. These water army accounts were revealed to be from the island of Taiwan, from some typical Taiwan-style text and translations used in their posts.

Tang Jingtai, a professor at the Journalism School of Fudan University, told the Global Times that Taiwan’s internet water army forces were highly likely behind the misinformation circulating on the Chinese mainland’s social media platforms recently such as “China will ‘import’ fleeing Ukrainian beauties” and “Taiwan will be the next Ukraine.”

Some accounts, including those having been proven fake, have recently crossed between overseas mainland social media, spreading one-sided anti-Russian messages, Tang suggested.

Some social media accounts from the island of Taiwan have deliberately stoked anti-Chinese sentiment over the Ukraine crisis. For example, a series of disrespectful joke comments about Ukrainian women allegedly posted by Chinese mainland users went viral on Twitter. The China cross-Straits Academy found out that the information was collected by a Twitter user in Taiwan, translated into English and spread via a news report by an anti-China website. The account of the original post was revealed to have interacted with the infamous Taiwan authority DPPs’ “online army,” also known as “1450” as the DPP authority said in 2019 it would invest NT$14.5 million to employ a small number of editors to “correct” information on the internet.

Li Haidong said that many of the slanderous content of media outlets or private organizations are in fact from the government sources. For example, US government funds for global publicity flow to the media or public relations companies. “So the public opinion war is a multi-department, multi-field or even cross-border business right now. In the past decades it was used to make the Soviet Union collapse, now it’s on China.”

“Their intention to attack China is obvious – to cooperate with their governments to launch the highest-intensity strategic competition with China through slandering China in international community in order to weaken China’s international influence,” Li noted. 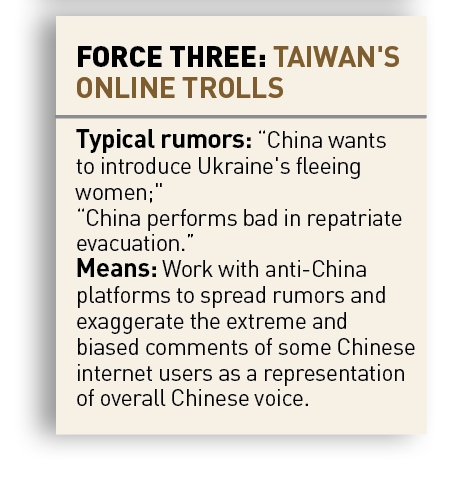