Guys, we need to talk about Clayton.

We’ve seen some wishy-washy people pleasers on TheBachelor before, but this guy might take the cake. All season long, he’s been telling each girl what they want to hear in the moment, gushing about the “special connection” he has with each one of them (even when there were still a dozen left!) and basically leading them all on without ever revealing how he really feels. Well, those chickens finally came home to roast this week when he took his final three ladies — Susie, Rachel and Gabby — to Iceland for fantasy suites. He can’t be equally in love with all three of them… or can he?!

Well, he’s certainly trying to be: Tuesday’s episode kicks off with him jetting off to Iceland — careful, Clayton, or you might make a “special connection” with that stewardess! — And fretting about his conflicted feelings about her. “I think I might be falling in love with all three of these women,” he confesses, “and I might already be in love with Susie.” Oh! This will definitely end well. Meanwhile, the three ladies share an awkward moment together, with Gabby announcing that she doesn’t “want anything to be off-limits” with Clayton. (That’s code for “I’m totally sleeping with him, just so you guys know.”) But Susie says it would be “devastating” if she learned he was intimate with either of the other girls: “I’m hoping he takes physical intimacy as seriously as I do.” Hmmm… we’re just gonna put a pin in that one and save it for later.

Rachel gets the first date, and as she and Clayton take a helicopter ride and explore the bottom of a volcano, he shares that he has “the strongest physical connection” with her. (Did you hear that, Susie?) Rachel is still a bit wounded that she got the last rose last week, though, and she admits she’s still waiting for Clayton to open up before she’ll say yes to the fantasy suite. She spills her concerns to Clayton over dinner, but he reassures her: “I’m falling in love with you.” (And the other two girls, too, but he doesn’t mention that.) That’s all Rachel needed to hear, and she happily heads to the fantasy suite with him — as Susie reiterates that him having sex with another woman “would be a really big boundary to cross.” Ooh, foreshadowing! 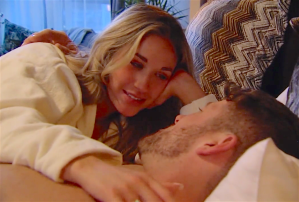 The next morning, they look lovey-dovey, and when Rachel calls out to him that she loves him, Clayton yells back, “I love you, too” — so maybe he did make up his mind? Rachel is glowing when she comes back to the hotel, and Susie starts worrying that her bond with Clayton is “too good to be true.” Meanwhile, Clayton is, once again, confused: He does love Rachel, but he thinks he might still love the other two as well. (We keep thinking this guy has to make a decision at some point… but not yet!) He takes Gabby on a rowdy dune buggy ride, and he definitely has fun with her, but he’s not putting out the same “love” vibes with her that he is with Susie and Rachel. She emphasizes that she’s ready to marry him, and he tells her how much he “appreciates” that… which is really not the same as reciprocating. But he still tells her he’s falling in love with her! Is there anyone this guy isn’t falling in love with?

As he and Gabby hit the fantasy suite together and “connect on a whole new level,” Susie tells us she’s “spiraling” while literally walking down a spiral staircase. (Kudos, producers.) Clayton even yells out his feelings from him to Gabby, too: “I am falling in love, and it feels so good!” When she gets back, Susie notes that she has “bed head” — ouch — and it begins to dawn on Clayton that he’s told multiple women that he’s falling in love with them. And he’s not done yet! His date of him with Susie is besieged by gale force winds, which is not a great omen. They rekindle things, though, at a hot spring spa, and Susie admits she’s feeling “nervous” about their connection. He settles her nerves with a kiss, and they share a romantic make-out session under a waterfall. It looks like love… again! 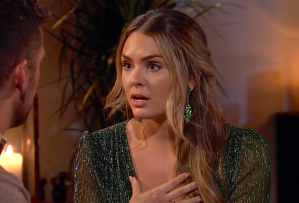 Sure enough, Clayton tells Susie he loves her… which is different and separate from how he’s “falling in love” with Rachel and Gabby. (The wording matters, OK?) But she pushes him on whether he feels the same way about the other two, and whether he slept with them, which she says would make it “impossible to move forward.” (Clayton’s face right here is one of intense, burning regret.) He reminds her that she told him to “explore” other relationships — and then admits that yes, he did sleep with “someone else,” and told “someone else” he have loving feelings for them. (Really, two “someone else”s.) He says, “I am the most in love with you,” which he thinks is helping, but Susie is in tears. He wishes he would’ve known that she was a dealbreaker — really, so it’s her fault she did n’t tell you that, dude? — And he pushes her to “work through the hard times.” Yes, the hard times you caused with your actions, buddy.

Clayton stammers his way through an explanation, admitting he slept with “both” of the other women. Susie holds firm, though: She can’t get past it. He keeps trying to make this her fault for not forgiving him, and she finally walks away, saying, “I can’t.” He storms off, telling a producer: “This is exactly what I was afraid of… I don’t believe in anything anymore.” Susie comes back to talk, and now he’s acting like he’s been wronged, somehow? He even gets her to apologize (!) — “I feel like I just f–ked everything up” — but when she says, “I don’t feel like I can leave here with you,” he explodes on her, telling her : “You just invalidated everything we had.” He turns cold and cruel, telling her “I don’t even know who I’m looking at anymore” and adding with finality: “I’m done.” She tries to apologize again (!!), but he just holds the car door open for her and tells her he’ll find someone “who will stick through it and will understand me for who I am.” Oh, you mean a guy who tells every woman he loves her so he can have sex with them and then gets angry when one of the woman dares to question it? That’s who you are?

As Susie drives off in tears, she admits she thought Clayton would have more “compassion” for her in that conversation. (Yeah, us too!) Meanwhile, Clayton is still ranting. “My heart’s not in it anymore,” he declares. “It’s over.” Then in the preview for next week’s two-part season finale, Jesse Palmer teases that “the crazy drama begins.” (begin?!) We see Gabby telling Clayton “I can’t believe anything you say” and his dad telling him he “screwed the pooch” before Jesse sets up “the Rose Ceremony From Hell,” with Clayton telling Rachel and Gabby he’s falling in love with both of them and was “intimate” with both of them. (Spoiler alert: They don’t take it well.) But then Jesse also informs Clayton he has some news “that’s going to change everything for you.” Well, this season started out slow, but it’s certainly kicking into high gear at the right time.

Did Clayton just pull the shadiest move in bachelor history? Will he actually end up proposing to Rachel or Gabby after this? Drop your thoughts — and we know you have some — in the comments below.