Dragons’ Den viewers were up in arms after the majority of the business moguls declined to invest in a book subscription company targeted solely at women and girls.

British entrepreneur Molly Masters was seeking a £50,000 investment in exchange for a 5 per cent stake in her book subscription service.

Books That Matter sends customers monthly boxes containing a must-read book by a female author alongside three gifts from female-led businesses. There is also a children’s version, The Brave Girls Book Club, aimed at girls aged eight to 12.

The company has turned over £800,000 to date and is projected to turn over more than £1million in the next year.

But it was not enough to impress Deborah Meaden and Sara Davies, who questioned why Molly wanted to ‘exclude’ men and boys with her business plan.

Molly Masters, founder of Books That Matter, went into the den to pitch for a £50,000 investment in exchange for a 5 per cent stake in her business 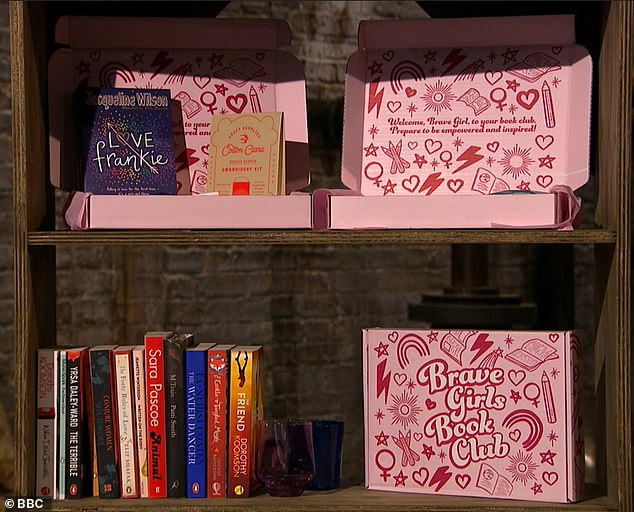 Books That Matter also recently launched the Brave Girls Book Club, in the hope of introducing children aged eight to 12 to women authors. Pictured, an example of one of the boxes 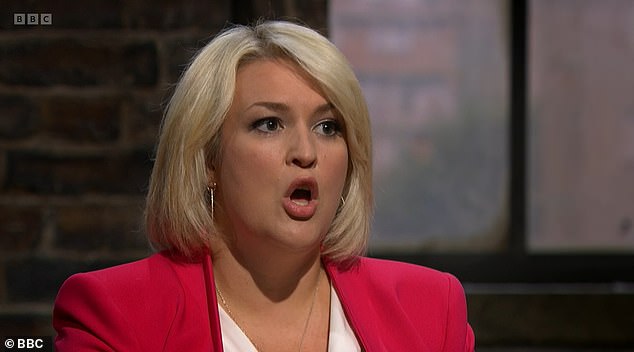 Deborah said: ‘I love the promotion of women but why would you restrict your audience? It seems a bit of a shame.

‘If you’re trying to open a window to female authors why would you target your audience so heavily towards women because that excludes a huge chunk.’

Molly stood firm and said the business was specifically intended to appeal to women, who make up 75 per cent of book buyers.

She said: ‘I perhaps wouldn’t say that the ultimate purpose is to level the playing field. My opinion it’s to amplify voices and I think women being the biggest book buyers are the recipients of that. We can see the value in it being a unique, female-only space.’ 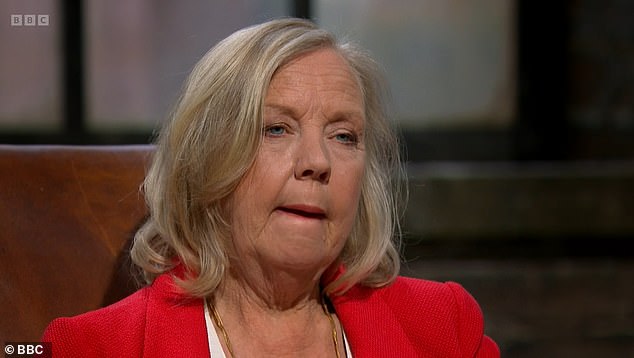 The healthy business was not enough to impress Deborah Meaden (pictured) and Sara Davies, who questioned why Molly wanted to ‘exclude’ men and boys with her business plan 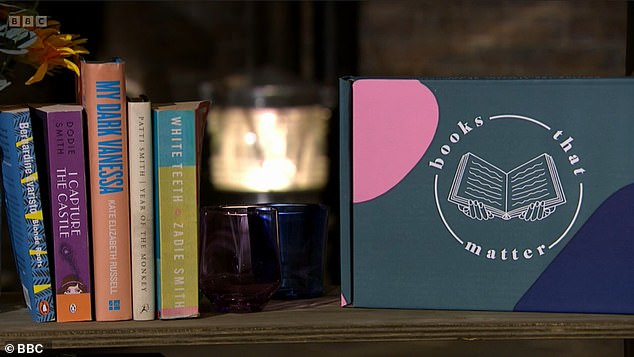 Each month, Books That Matter subscribers receive a book by a female author alongside three gifts from female-led businesses. Above, one of the boxes shown on the show

Deborah added she was ‘disappointed’ because the branding and gifts were ‘excluding’ to men.

Sara, a mother of two boys, was also unconvinced, saying: ‘I’ve got two boys and my boys wouldn’t want to read things that come out of a pink box so you’re excluding me as a consumer.

‘That might be purposeful and you’re wanting to appeal to a niche… but that’s a big missed audience.’

Again, the entrepreneur stood firm, saying: ‘I think we’re trying to combine the feminist with the feminine and there’s nothing wrong with that being front and centre. I just feel it speaks directly to women and that’s where we’re at.’ 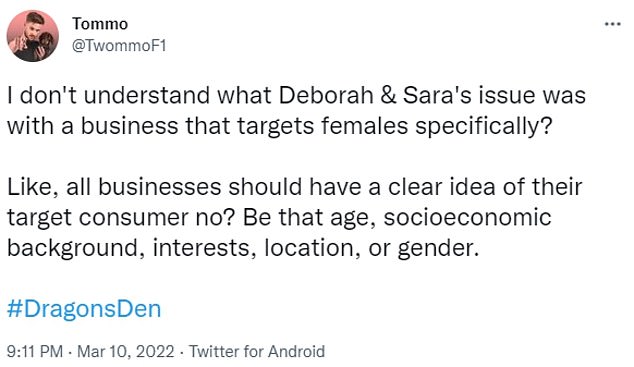 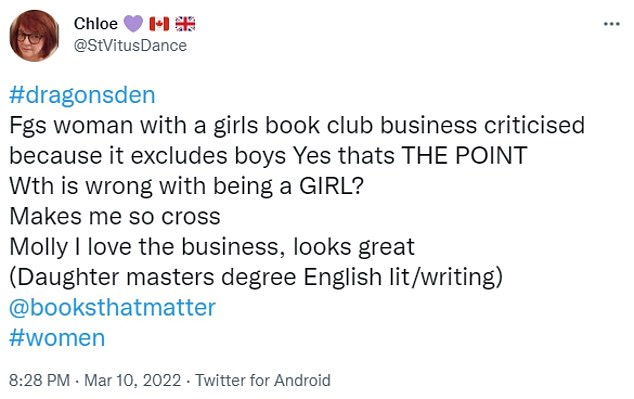 Sara and Deborah’s decision shocked viewers, who questioned why it was wrong to make things for women and girls

Ultimately it was not enough to persuade Sara, who said: ‘I like this. That’s the problem, I like it, I don’t love it. You’ve made me feel compelled to address my own behaviors by making a conscious effort to maybe buy more female authors but you haven’t compelled me to want to invest in you.’

Deborah also didn’t shift her position, saying: ‘Of course I want to bring a spotlight onto female authors but I don’t want to do it in a way that I see as more divisive.

‘It drives us more into “male”, “female” so I’m afraid for that reason, the good news is, it’s not because you don’t have a good business, but it’s because I can’t buy into the ethos of it.’

Their attitude shocked viewers, with one tweeting: ‘I don’t understand what Deborah & Sara’s issue was with a business that targets females specifically? 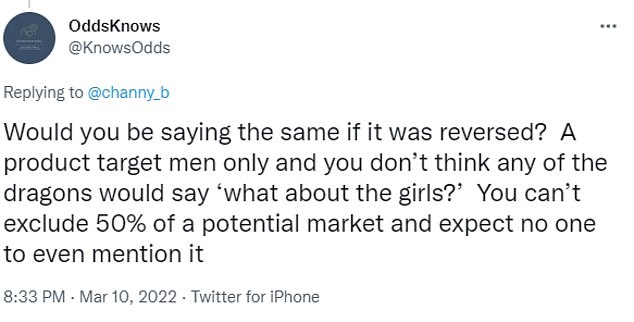 ‘Like, all businesses should have a clear idea of ​​their target consumer, right? Be that age, socioeconomic background, interests, location, or gender.’

Another posted: ‘Sara Davies just said her boys flat out would refuse to read a book if it arrived in a pink box. Think that says more about your parenting and the attitudes you’ve instilled than the pink box, luv. #dragonsden.’

A third wrote: ‘How disappointing. #dragonsden a woman comes on promoting a subscription service selling books written by female authors to women and girls. The first thing the two female Dragons say is “but what about the boys.” Ffs.’

However other Twitter users argued Sara and Deborah were right not to invest.

One posted critic: ‘Would you be saying the same if it was reversed? A product target men only and you don’t think any of the dragons would say ‘what about the girls?’ You can’t exclude 50% of a potential market and expect no one to even mention it.’ 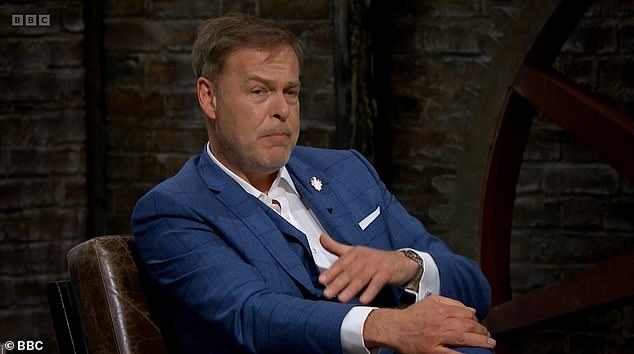 Peter Jones, a father of four girls, was far more positive, telling Molly: ‘I love what you’ve done and I can clearly see that you’re on the cusp of a movement here that could have a paradigm shift’ 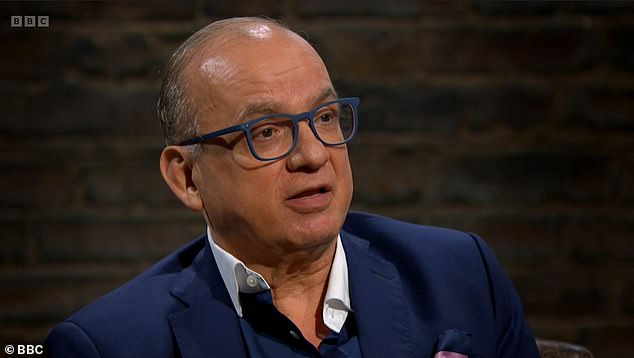 The only offer came from Touker Suleyman, who wanted 30 per cent of the business in exchange for his £50,000 investment. This was ultimately declined by Molly

Peter Jones, a father of four girls, was far more positive, telling Molly: ‘I love what you’ve done and I can clearly see that you’re on the cusp of a movement here that could have a paradigm shift.’

Steven Bartlett was similarly effusive but, like Peter, worried about how much work would be required to get a return on his investment.

He said: ‘I think what you’ve done is phenomenally impressive, I think your branding is amazing, I understand your business, I know the space. However I don’t think for the effort I would have to put in, I could possibly make a return that would make that worthwhile.’

The only offer came from Touker Suleyman, who wanted 30 per cent of the business in exchange for his £50,000 investment. This was ultimately declined by Molly.