In his preface to the 1997 book, The Challenge in Kashmir: Democracy, Self Determination and a Just Peace, Sumantra Bose, the well-known academic and expert on the Kashmir conflict, raises the question: “Why another book on the conflict in and over Kashmir? Hasn’t the vexed topic been flogged to death already?”

And then, unsurprisingly, given his deep interest in Kashmir, he has made 20 odd field visits to Jammu and Kashmir over the next quarter-century, and written extensively and sensitively on the Kashmir conundrum. Bose’s latest volume, Kashmir at the Crossroads: Inside a 21st Century Conflict (Picador, India 2021), is a deeply-researched, brilliantly-articulated searing yet definitive narrative.

The mindscape includes the India-Pakistan bilateral, unfolding of the high intensity Kashmir insurgency (1990-mid 2000s), the Union government’s ‘shock and anger’ revocation of the state’s autonomy in 2019, transformational regional geopolitics and the China factor in Jammu and Kashmir .

‘Kashmir at the Crossroads: Inside a 21st Century Conflict’, Sumantra Bose, Picador, India 2021.

Bose traces a mind-boggling array of events and developments during the 1950s-1980s in intimate detail with his characteristic intellectual honesty and dexterity, starting with Kashmir’s special status (Article 370), the arrest of Sheikh Abdullah and rule through draconian laws among many others. .

“Why was the harmonious Kashmir-India symbiosis fatally damaged,” he questions. It was because the Union government’s approach was to allow widespread corruption as an adhesive to bond Kashmiri society; select pliant leaders to do its bidding; initiate stealthy constitutionalism (28 Constitutional laws and 262 Union laws were made applicable to J&K) and allow massive rigging of elections.

He pinpoints the Union government’s dismissal of Sheikh Abdullah (1953) and then his son Farooq Abdullah (1984), the Rajiv-Farooq accord (1986) and the rigged elections (1987) as key reasons, among others, for the insurrection emanating from “ four decades of Indian policies and actions since 1950s”. No wonder Pakistan was ready to harvest the consequential anger and alienation for its Kashmir strategy.

In the map of Jammu and Kashmir (after the preface) the line joining the grid reference NJ 9842 and Karakorum Pass to the north-east indicated as claimed but not de facto is factually incorrect. Because, as the author states in page 109, the India-Pakistan agreement on Line of Control (LoC) in 1972 “demarcated the line only up to NJ 9842… and the LoC was simply described as extending “thence North to the glaciers.”

In the manner of a political archaeologist, the author assiduously explores layers upon layers of unparalleled complexities and stakeholder dynamics to shine the light on the high intensity phase of insurgency that engulfed Jammu and Kashmir from 1990 until mid-2000s. “The carnage”, he thoughtfully avers, “is a grim lesson in the ruinous potential of nationalism, as Orwell defined it or rather, of nationalisms competing for supremacy – the state-led nationalisms of India and Pakistan and the state-seeking Kashmiri nationalism , which has as its epicenter among the Muslims of the Kashmir Valley.”

Bose quotes officially stated fatalities of 16,000 insurgents, 4,600 security forces personnel, 13,500 civilians, not counting 8,000 people who, as per Association of Parents of Disappeared Persons, remain untraced. Political initiatives and counter insurgency successes of security forces helped bring the high-intensity phase under control with fatalities reducing from about 4,000 in 2001 to an annual average of a few hundred over the past decade or so.

The enormous popular support for the resistance movement among workers, teachers, shopkeepers, doctors and lawyers and the public has been widely chronicled. But in a sombre reflection, Bose counsels, “These expectations of imminent freedom were desperately naïve…The response supported by virtually the entire spectrum of Indian political opinion was simply repression – of a scale and intensity that made the draconian police state of the previous four decades look positively benign.”

The author analyzes the India-Pakistan bilateral across a wide spectrum including nuclearisation, diplomatic openings, the Kargil War and the crisis of 2002 concisely and comprehensively. Clearly Pakistan’s repeated mass casualty terror attacks which came to Mumbai in 2008 constituted a severe bilateral setback. Terror strikes on the Pathankot Air Force base, Army’s Uri camp and later on the CRPF convoy in the Valley followed by IAF’s daring strike on the terrorist training camp at Balakot led to a starvation in bilateral dialogue, which still persists.

Bose endorses the peace process envisaged in the Lahore Declaration (1999) that resolving Kashmir is “in the supreme national interests of both countries”. “The Northern Ireland type of settlement finds favor “despite its new complexities arising from the UK’s troubled exit from the EU”. Laying the conflict to rest through diplomacy and statecraft is clearly the only way forward.

The author underlines how cautious hopes of the India-Pakistan peace process (2003-2007) – including the Vajpayee-Musharraf and Manmohan Singh-Musharraf 4-point Kashmir formula – which ran aground by the time of 26/11 Mumbai terror attack, gave place to a new phase of uprising wherein the youth pelting stones replaced the gun yielding insurgent. In this stone-bullet conversation, the state’s employment of pellet guns against agitators, especially during 2016, ignited even greater anger and alienation. Scores of citizens turned blind and over a thousand suffered eye injuries. 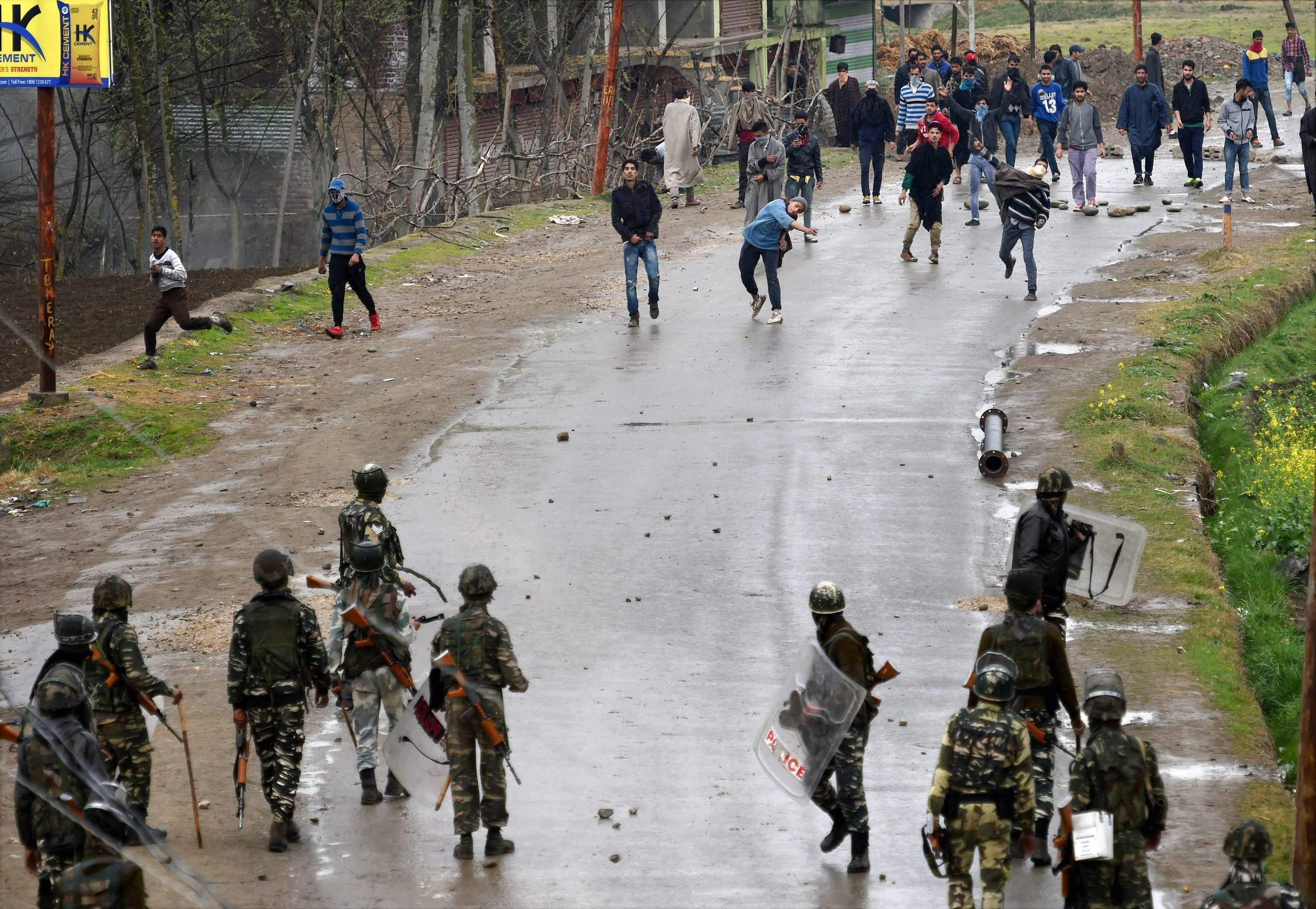 A group of youth pelting stones on security forces during an anti-militant operation at village Durbugh in Chadoora area of ​​central Kashmir’s Budgam district, in March 2017. Credit: PTI/S. Irfan

In a pointed and chilling critique, Bose denounces “brutalisation of local society, particularly in the Valley. Entire generation has grown up and come of age in an environment of repression and violence…Despite the sharp decline of insurgency to negligible levels, the Valley remains a police state. The new generation is unwilling to put up with such a situation.” People chafe at the denial of everyday freedoms and civil liberties and also a media policy that makes “journalists and news organizations answerable not to their readers but to government bureaucrats and security officials with power to decide what news is fake or anti-national”.

Reorganization of the state

Driven by its decades-old ideological imperatives and an iron-fist Kashmir policy, the Union government, in a ‘brazenly unilateralist’ move, read down Article 370 and Article 35A and divided the state into two Union Territories of Jammu and Kashmir and Ladakh in August 2019. A heartless communications and movement clampdown in the state, additional induction of tens of thousands of security personnel and incarceration of political leadership across a wide spectrum preceded the ruling dispensation’s pitiless initiative.

Bose convincingly reasons, “Erasure of the state from the political map of India was a very deliberate act calculated to degrade the sense of self of the liquidated state’s people, and represents a much deeper cut than the revocation of hollowed out shell of Article 370. ” A deep sense of anger, alienation and betrayal among people in the Valley is palpable. They strongly believe that Kashmir is a political problem that requires a political solution, and without a political resolution death and destruction would visit the Valley with increasing frequency.

Sustained peace and stability have evaded four generations of Kashmir and each one tells its story. As to the dozens of petitions pending in the Supreme Court for over two years, he observes in jest that “divine intervention was more likely than judicial intervention”. Today people of Jammu, Leh and Kargil are also substantively embittered: Jammuites fear loss of their land and jobs to outsiders, while people in Leh and Kargil lament that their local government has been rendered ineffectual.

The author reminds us that China has always lurked in the background of the India-Pakistan Kashmir conflict. But following India’s drastic August 2019 Kashmir actions, it expressed serious concerns about this change of status quo exacerbating tensions and undermining China’s territorial sovereignty. Bose quotes reports on China’s Army blocking patrols in the Pangong Tso area within a month of creation of Ladakh as a Union territory.

Large scale Chinese intrusions in Ladakh during mid-2020 followed by its mobilization of tens of thousands of troops are a pointer to China’s new assertiveness. India too had to respond in a commensurate measure. “Regional geopolitics”, Bose avers, “is becoming explicitly trilateral.” He goes on to predict that the “quadrilateral geopolitics of the 21st century Kashmir conflict – India-Pakistan-China-America – will play out not just during the tenure of the Biden administration, but over the rest of this decade.”

Kashmir at the Cross Roads: Inside a 21st Century Conflict by Sumantra Bose is an admirably crafted, exhaustively researched and vividly recounted introspection on the Kashmir issue, with its myriad complexities. An insightful and fascinating narrative has succeeded in keeping the focus on the people of Jammu and Kashmir, notably those in the Kashmir Valley. The book offers a deep insight into how the Indian government’s August 2019 reorganization of the state, the current India-China tensions and changing regional geopolitics could lead to the transmutation of the Kashmir issue.

Air Vice Marshal (retd.) Kapil Kak is part of the Track-2 process on conflict resolution and peace-building in Jammu and Kashmir.