The ‘Halo TV series’ certainly has had a long and rough ride. Originally announced in 2013, the show was supposed to be released as a Showtime exclusive, with director Steven Spielberg at the helm. Then back in 2015, the show was deep into production, but not much was known about the show. More things happened; the show was eventually delayed until 2019, while key roles were changed around, along with the producer change. It would see several more delays, to 2020 and finally, until 2022. As I said, it’s been a long and rough ride. Yet here we are now, with the Halo TV series practically at our doorstep and will debut exclusively on Paramount+ on March 24, 2022. Thanks to Paramount Pictures, we were able to get an early look at two episodes ahead of the official release.

The first episode starts with a bang. We’re introduced to an insurrectionist camp, which was odd as this meant the show is taking a different route than the games. Here, we’re given a glimpse of a few insurrectionists as they watch the news that the USNC has started to deploy the Spartans. Super touch, kick-ass troopers that are supposed to be the solution in making battles and wars much easier. Something of which has the insurrectionists both humored, others worried. It’s a nice touching of foreshadowing, and again, shows that things are going to be quite different in this show.

Suddenly, the Covenant arrives, and they’re on this currently unnamed planet to look for an artifact. We don’t know what this artifact is, or what it does, but it’s apparently important. Soon enough, the Covenant locates the insurrectionists, and let’s say that the insurrectionists stood little chance. It looks like a complete bloodbath until a long USSC ship appears, with everyone stopping what they’re doing to watch it hover over the village. A lone Spartan drops, the Covenant are momentarily in shock before continuing their attack. Suddenly, several other Spartans drop down and start cleaning up shop. Much to the surprise of the insurrection members, since they don’t believe that the UNSC or United Nations Space Command gives a damn about them. Despite the Spartan’s help, everyone, except for one person was declared dead. Surprise, the only one who survived happens to be the village leader’s daughter, Kwan. I’m sure she’ll end up being either a plot device or a major character down the road. However, here’s where things are a bit fuzzy with me. Now, if I’m the Covenant, I wouldn’t be going out my way to slaughter a village of people, especially if it’s going to give away my location. The Covenant in the games and books may not have been rocket scientists, but they weren’t careless either. So this move is a bit weird in my mind. But it was cool watching the Spartans make their appearance, but of course, our buddy Master Chief had to be front and center, initially.

Alright, but let’s move on.

While attempting to verify that they eliminated all of the threats, the Spartans search for and locate the Covenant’s ship, and below it is a cave with something inside of it. This something was the reason why the Covenant was even on the planet, and upon touching this item, it reacts to Master Chief, flooding his mind with memories that he doesn’t seem to recall. Needless to say, he’s both confused and lost, but thankfully the good people at USNC see all and know all. We also see the Covenant ship department, meaning that some of the Covenant managed to survive the assault.

Master Chief leading a pack of Spartans is new and is something that I’m not aware of ever happening. That’s not to say that’s a bad thing, it’s just weird, but I dig how they’re attempting to make him more human-ish. I’d imagine trying to recreate the same character from the game wouldn’t translate well. Also, seeing the other Spartans action and this not being the Master Chief show is refreshing. I’m hoping this continues throughout the series.

After this, things head back to the Covenant, who learn that the USNC has the artifact they were looking for. Not thrilled about the events, a certain person of interest that we can’t mention yet, is shown discussing that she wants to speak to the surviving Covenant. It’s an interesting scene, and we can see the Covenant communicate using words and gestures to get their messages across to each other. Some are more evolved, others not so much, which is keeping with the current makeup of the Covenant that has been established throughout Halo’s long history. Yet, things here are also different. There’s a lot here to take in, despite the brief time spent here.

Shortly after, we’re introduced to another familiar face, Doctor Catherine Halsey, and she seems to be a carbon copy of the person from the game. At least on the surface, but I feel it’s too early to determine what she’s up to. She’s a dynamic character in the game and book, and I’d imagine this would hold true in the show as well. She along with others doesn’t like what’s happening to Master Chief and they want him back to them, ASAP. Already, Master Chief has angered everyone upstairs, and that’s another departure from the character we are all familiar with.

But when he starts to go against the plan that was cooked up by UNSC to cover up this little incident, things suddenly take a turn for the worse and that’s when someone wants Master Chief dead. Here, we have an instrument of destruction and a project that costs quite a bit of money. Yet, the decision to put him down because he’s going off-script is the first thing someone decides to do. Halsey disagrees with this but doesn’t make her disagreement known. Instead, she confronts the other Spartans and tells them that no harm comes to Master Chief. As if, I mean, he’s practically indestructible as it is but ok. 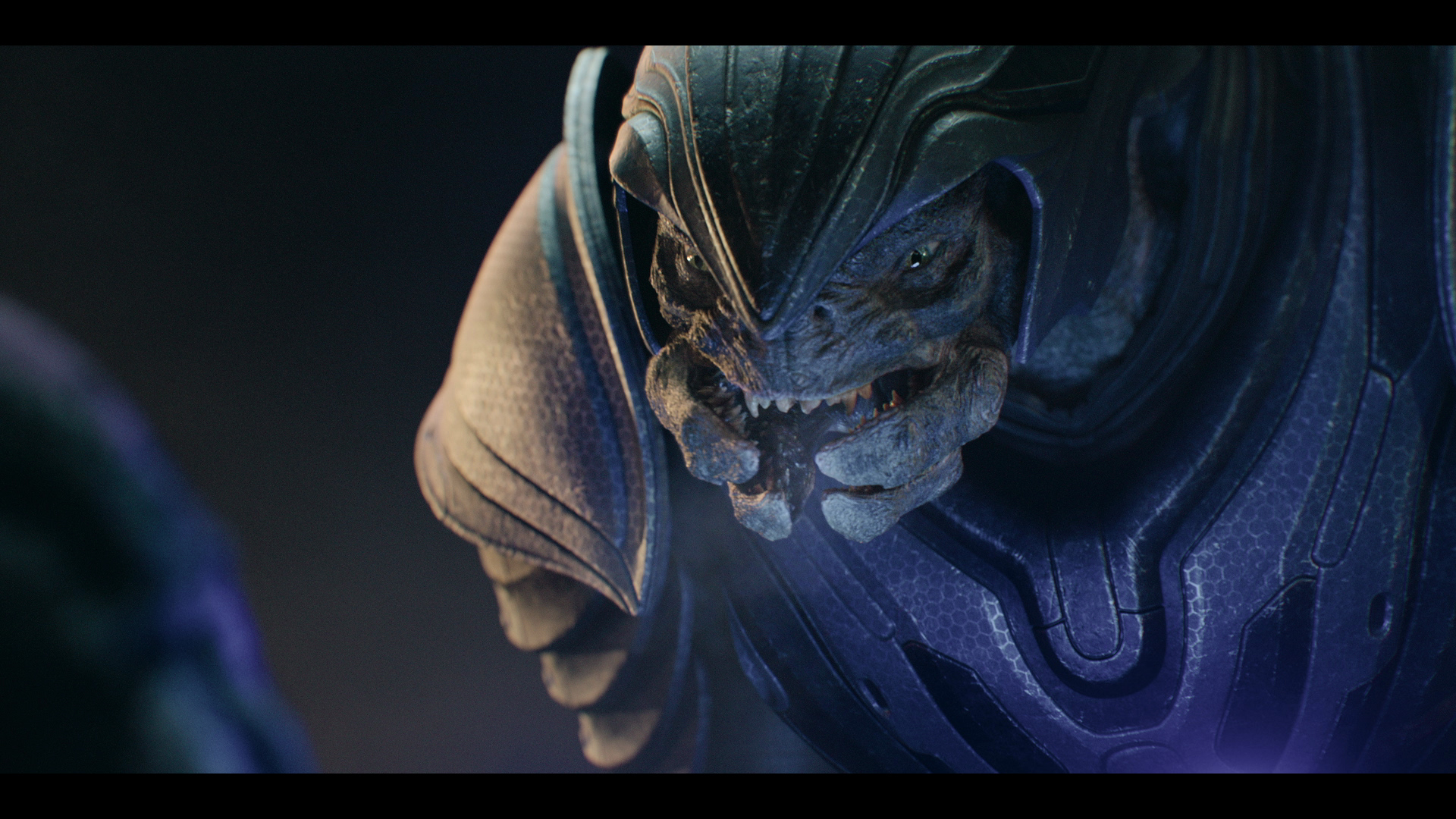 Meanwhile, the Pelican that Master Chief on has been taken under control and is now flying him directly into the hands of the USNC. Not being a fan of this course of action, he along with Kwan, worked frantically to get the ship under their control. It’s an odd spectacle watching Master Chief suddenly become an engineer, knowing every bit of the Pelican and what he needs to do to make things right. Except, it doesn’t, and it isn’t until Kwan decides to take an assault rifle and shoot up the important bits and stopping the Pelican. All while putting a damper on USNC’s master plan.

There’s a bit more that takes place, but unfortunately that all falls into spoiler territory, so you’ll have to watch the show to see what happens. Sorry about that.

When the series was revealed, I wasn’t sure which direction the series would take. As someone who’s followed Halo since the beginning, I’m happy to see that Paramount and Microsoft decided to start at the beginning, the very beginning with the Insurrection. It’s a part of the Halo universe that only those who read the books would know of, as the Halo games never touched on this.

However, the events that have transpired and the dates have thrown me for a loop, but that’s alright. You see, the Halo TV show timeline isn’t the same as the one from the books and games and instead will focus on what’s being called “The Halo Silver Timeline.” Instead of being stuck telling a story that’s already been told, this new timeline will have parts that are canon, while allowing the show to tell a different story. It will still be rooted in the canon, but certain liberties, as I’ve already seen, can be taken. Not just with the story, but other key characters have been altered or changed in one aspect or another, as have the dates.

Watching Master Chief talk amongst his Spartans team and barking commands or confiding in others about his feelings and uncertainties is new to me. That character has been, through all of the games and books, has been a very vocal limited character. When he speaks, he doesn’t engage in long-winded conversations, yet here he has said more in 30-seconds than he has in hours of Halo gameplay. I still haven’t gotten used to Pablo Schreiber playing the iconic character, but he is growing on me. He has the gruff voice down, and I feel he has done a great job portraying Master Chief. He’s done an excellent job playing the humanity-isolated character. 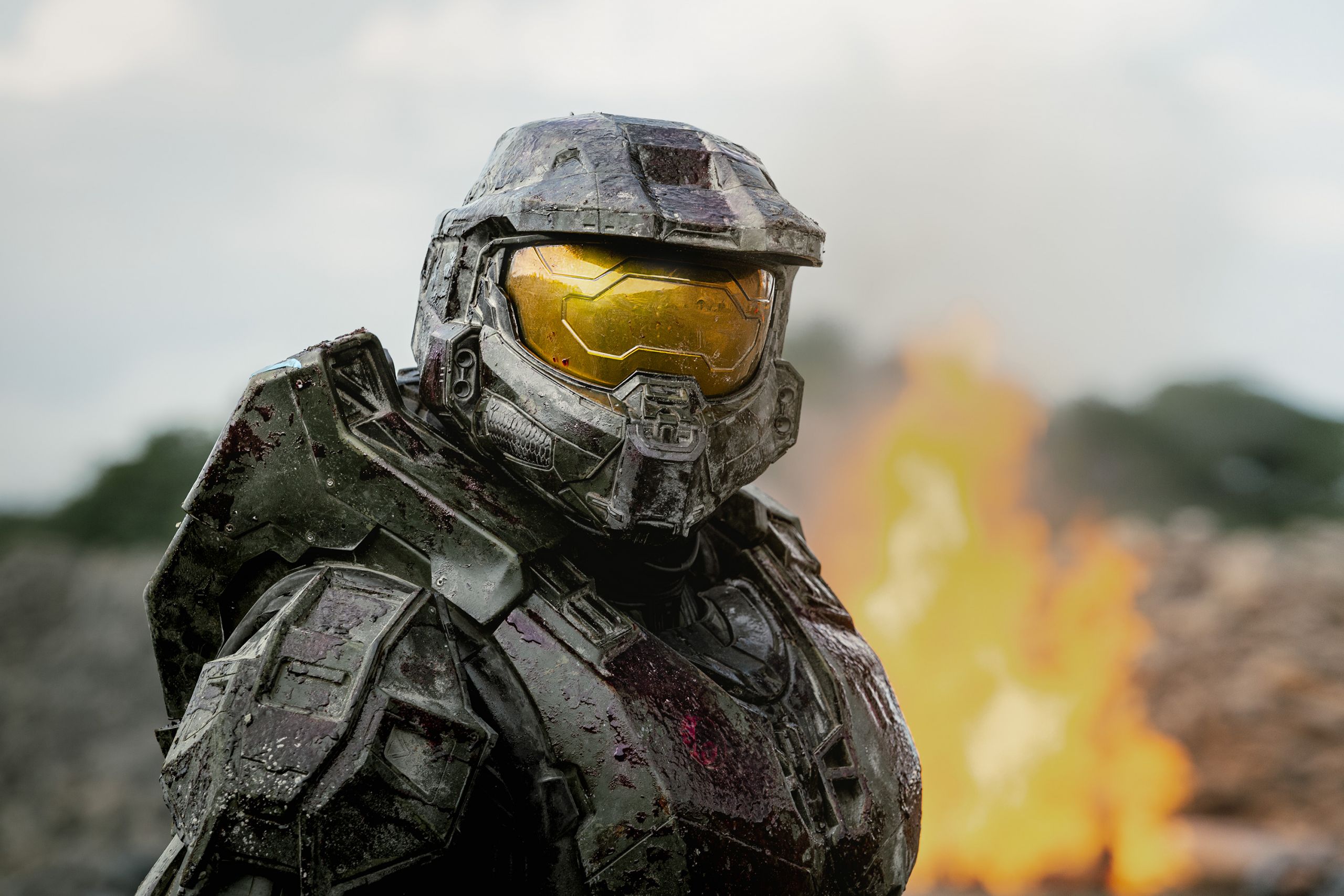 As for the Covenant, Spartans, USNC, and all of the related backdrops, they have all been faithfully represented. I especially enjoyed how the Spartans looked, each with their own distinctive looks and armaments. This goes for the ships and buildings for each of the opposing sides — everything is faithful. Even the names and insignia have been left intact, and I let out a sigh of relief when the USNC Hammer of Dawn was mentioned. It goes without saying that fans of the Halo series are going to be happy with what has been shown so far, even if the timeline isn’t the one they’re used to.

I’m already dressed in this new story, as it not only focus on Master Chief but also several other components to the story. So far, this is shaping up to be a good show, and I like the various changes that have been shown and told along the way.

The Halo TV series debuts exclusively on Paramount+ on March 24, 2022.