The first season of “Bridgerton” had a lot of sex. So much so that I sort of regretted recommending it to some older relatives. But the Netflix show from late 2020 offered frothy escapism right when many of us needed it, in the form of bare chests, heaving bosoms, opulent costumes (and cookies) and the common misunderstandings of your typical late Regency storyline, including enemies to lovers and a fake dating plot.

It also presented a brand of alternative history where characters didn’t comment directly on race, yet the cast was more inclusive than London society was at the time. “Bridgerton” is a product of Shondaland, and Shonda Rhimes and showrunner Chris Van Dusen continue to advance shows forward from all-white casting, including the casting of period shows such as this one.

Three major new roles in Season 2 are women of color: Simone Ashley playing Kate Sharma, Charithra Chandran playing her younger sister Edwina and Shelley Conn as the girls’ mother, Lady Mary Sharma. The women anchor the show and provide a storyline both more urgent and believable than the initial couple of “Bridgerton”: Daphne and Simon and their ruse to get people off their back about courting by pretending to court each other. We all knew how that was going to go.

But in Season 2. . . we don’t, exactly. The new run of “Bridgerton” has less sex — but is sexier than the first season. It’s also more compelling in almost every way.

Related: From race to incels, the modern “Bridgerton” twists hold a mirror up to today’s shortcomings

“Bridgerton,” based on Julia Quinn’s series of books of the same name, focus on the wealthy Bridgerton family and their eight alphabetically monikered children. Led by widowed matriarch Lady Violet Bridgerton (the quietly powerful Ruth Gemmell), the family attempts to navigate upper class society, particularly when it comes to marriage.

Adjoa Andoh and Ruth Gemmell in “Bridgerton” (Liam Daniel/Netflix)In their marital pursuits, the Bridgertons rub elbows with fellow members of high society, including their neighbors the redheaded Featheringtons, who can’t seem to escape scandal, and Lady Danbury (Adjoa Andoh) an important friend of Simon’s family and the person who will orchestrate Edwina’s entrance into society in the hope of marrying the young woman off well.

The show continues to be narrated in its second season by Lady Whistledown (voiced majestically by Julie Andrews), the anonymous gossip writer who thinks leaflets the whole community devours, hoping to see or not see themselves — a sort of Regency “Sex and the City ” or “Gossip Girl.” No one reads Lady Whistledown more obsessively than the Queen (Golda Rosheuvel) who has made it her mission to unmask the anonymous writer.

RELATED: 29 of the oldest actors to play teenagers on TV

Except she’s not anonymous for us anymore. Lady Whistedown’s identity was revealed at the close of the first season to be Penelope, the overlooked and earnest Featherington sister played by the wonderful Nicola Coughlan (“Derry Girls”). The “ton” still has no idea, however. Can the show keep the tension up now that we know, and now that it turns out sweet Penelope was responsible for some decidedly sour gossip, including words that altered her pregnant cousin’s life de ella? Although Coughlan continues to shine, this subplot feels a little thin compared to the other treats of the season.

Namely, the new couple at its center.

The “Bridgerton” novels focus on a different sibling each book, and the Netflix show so far falls online. This season’s stars are the eldest Bridgerton brother Anthony (Jonathan Bailey), the man of the family since his father’s passing from him, stressed with all the responsibilities, and Kate: new to the “ton” from India. That this season acknowledges Kate, her sister de ella and their mother’s country, heritage and traditions makes it already different from last season.

It also acknowledges that life has been difficult for Lady Mary — and by extension, her daughters — because she married below her station, a situation another beloved character comes dangerously close to treading this season. Because of these difficulties, Kate has decided not to marry and to focus solely on her little sister’s happiness and her future.

You can imagine how it goes when a character fervently decides she will never fall in love.

Meanwhile, Anthony approaches marriage like an agenda item. Edwina is perfect on paper, and as played by Chandran, she is more than simply perfect, but a fully fleshed-out character with her own hopes, disappointments and a lot of responsibilities on her young shoulders.

But once Anthony sees Kate riding her horse wildly in a field — something she enjoys along with other cool girl traits like shooting and fishing her croquet ball out of the mud — it’s both all over and of course, just getting started. This is sweepingly romantic, and filmed with yawning meadows and misty woods like a Bronte novel, in a way that feels different from the first season. For one thing, the obstacles between the central couple make more sense.

The first season of “Bridgerton” had an elaborate series of ruses contrived to keep the lovers apart for as long as possible, ranging from the accurate to the absurd. What keeps the lovers at bay this season is simpler and more timeless.

Ashley and Bailey also have a chemistry that burns through the screen. Ashley, who shined in “Sex Education,” does so much with a piercing look, while Bailey is the most frustratingly bad good man (or good bad man) since Mr. Darcy. Colin Firth, Bailey may be coming for your crown. 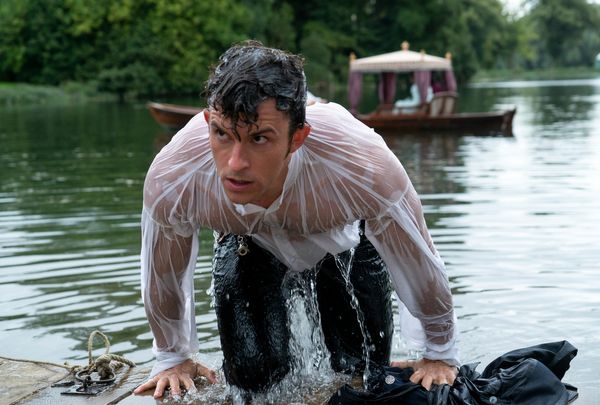 Jonathan Bailey as Anthony Bridgerton in “Bridgerton” (Liam Daniel/Netflix)A central scene in the book between the couple and a bee (yes, a bee — it’s a big deal) is wisely both scaled down and heightened in the show. In an intensely emotional moment, characters share palpable tension and a connection that goes beyond mere physical attraction into comfort. Even love.

Want a daily wrap-up of all the news and commentary Salon has to offer? Subscribe to our morning newsletter, Crash Course.

Though Kate and Anthony are the diamonds of our season, the storylines particularly of the older women characters also deepen. Both Lady Danbury and the Queen can come off as a bit brittle, but season 2 humanizes both of them more.

Lady Bridgerton and Lady Danbury have a wonderful scene that gives a hint of their history as young women and acknowledges the ridiculousness of their society lives. Lady Featherington (Polly Walker) finally gets a crush-worthy storyline well, worthy of her. And more of the Queen’s life and past is sensitively dramatized, giving a chance for both Rosheuvel and Chandran to shine with quiet empathy.

Some romantics may not be completely pleased by season 2, which doesn’t wrap up neatly in a bow like the empire waist on a Cressida Cowper dress. But fans of love’s eternal hope will keep the “Bridgerton” candle burning.

Season 2 of “Bridgerton” is now streaming on Netflix. Watch a trailer for it below, via YouTube.