Directed by Shruthi Sharanyam and Vinu Vasudevan respectively, the two short films trace the journey of a Kathakali artiste and that of a discerning spectator

Directed by Shruthi Sharanyam and Vinu Vasudevan respectively, the two short films trace the journey of a Kathakali artiste and that of a discerning spectator

Each Kathakali play transports viewers to an enchanted land of larger-than-life heroes and heroines, beasts and saints. Two documentaries released on YouTube recently attempt to understand what has helped this form of theater cast a spell on modern-day practitioners and viewers.

Directed by Kathakali aficiando Vinu Vasudevan, the 10-minute short film goes behind the scene to find out what attracts a child to Kerala’s theater art form, which includes vocal music, percussion, dance and acts.

One of the members of Malappuram-based People Story Collective, of which Vinu is also a member, had approached Vinu during Onam last year to do a documentary on different kinds of story-telling.

Says Vinu: “I had written ‘Paccha Mokaru’ (Green Face), a short story, many years ago. It was the green facial make-up of Kathakali heroes that enthralled me as a child. I used that as the script to make the film.”

Vinu explains that in many ways, the story is autobiographical. Kathakali performances were held regularly at his spacious house in Malappuram district. “Initially, what fascinated me was the colorful costumes and makeup of the artistes.”

That attraction evolved into a deep interest in Kathakali. At the age of 10, Vinu began learning Kathakali and performed for a few years before becoming a discerning viewer and organizer of Kathakali. 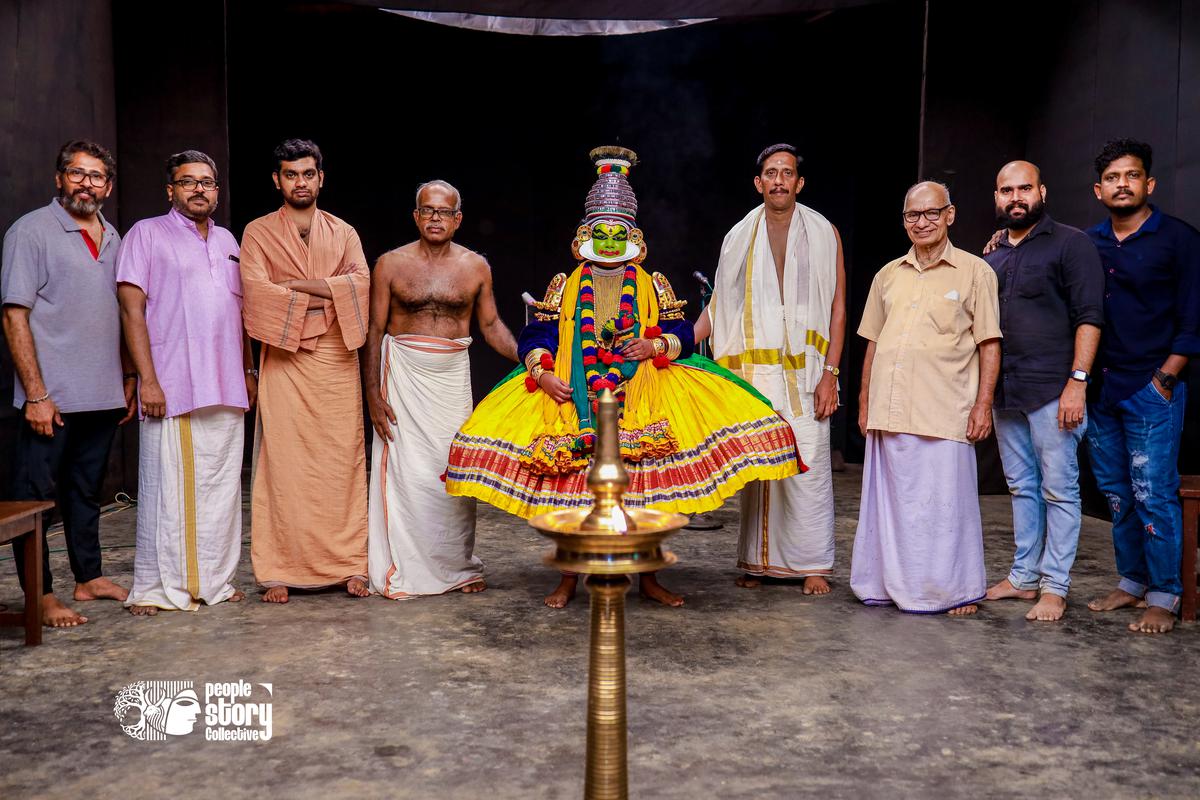 It is that early journey from curious child to performer that the 10-minute short narrates in Petti Paranja Kathto. The title refers to the voluminous box, called an atta petti, in which Kathakali performers used to keep their costumes. Sketches in black and white enhance the narrative that tells viewers how performers used to carry the boxes on their heads or in bullock carts when they had to travel for recitals.

But for a few shots, the entire film, shot in Vellinezhi and Karalmanna, was done against the background of a real-life performances. the sound of the melam enhances the visuals.

The film was released on the People Story Collective’s YouTube channel on March 19. At the age of 25, Haripriya Namboodiri, a teacher, fell in love with Kathakali. Exposed to the art of her since childhood at her mother’s home in Manjeri, she decided to learn Kathakali from a guru to become a knowledgable spectator. Her training from her was under thespian Kalamandalam Vasu Pisharody.

“I had no idea of ​​ever performing on stage. Within a year, however, I was on stage enacting the character of Sati in Dakshayagam Kathakali. 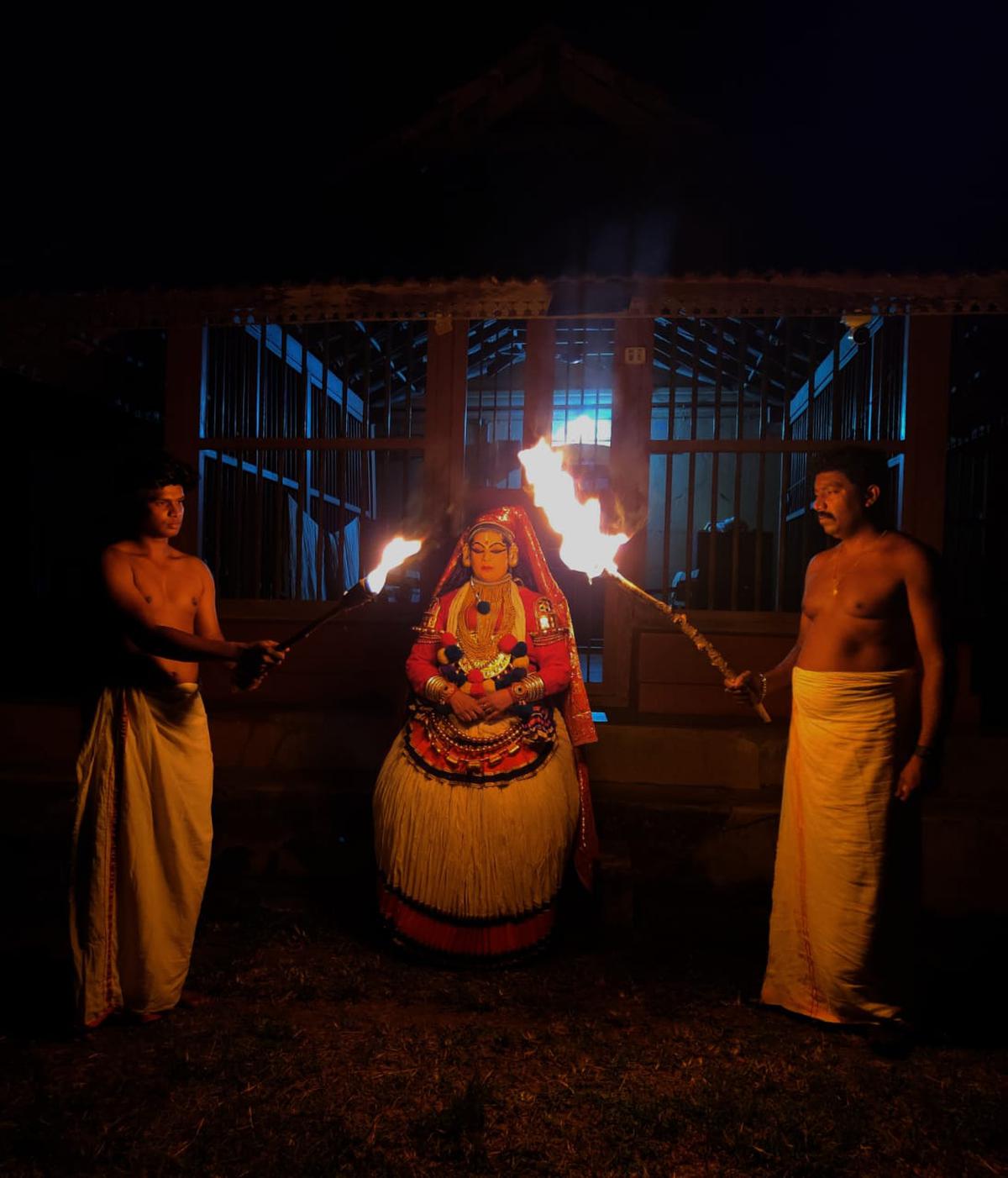 The movie Haripriya, follows petite Haripriya’s evolution as she steps into a male bastion with elan. Traditionally, men used to perform all the women characters in Kathakali. The artiste talks about how she, a professional, homemaker and mother, honed her interest in her and became a performer on stages all over India. Over the years Haripriya had breathed life into Kathakali characters such as Lalitha, Damayanthi and Urvashi. “The short film focuses on me because I chose to become a Kathakali performer though I had other career options. Although it took time and hours of hard work, I was able to find my feet in a traditional male-dominated art form,” she says.

In the film, Haripriya elaborates why she prefers to essay women characters.

In between learning and performing, she also did her doctoral research on the feminine in Kathakali from Kalamandalam Deemed University. That academic background has helped her understand and find her space in interpreting female characters in Kathakali.

Vasu Pisharody explains why he would like to see more women donning female roles in Kathakali.

Directed by Shruthi Sharanyam, the 22-minute documentary also delves into the space for women on the Kathakali stage. “Sarvamagala Productions which is documenting the cultural landscapes and art forms of Kerala, approached me to do a documentary on Haripriya. I have worked with her in my music video and so we have a good rapport. The documentary has been given a cinematic treatment,” explains Shruthi. Music has been scored by Sudeep Palanad