Here is the latest installation of Poet’s Corner, presented by the Edmonds-based EPIC Poetry Group.

songs are like tattoos…
words
imprinted
on the skin of my soul.
music
embedded
in the voice of my memory.

leaving
forever marks
on my heart,
my soul,
wherefrom

I
continuously
sing and
speak
for the
remainder of my days.

The sign painter’s tools became
megaphones for truth and resilience.
Incarcerated without justifiable cause, he
refused to allow his life to be paused.
A man’s heart can be broken, but the
soul and spirit are stewards of promise.
The canvas of the soul is the medium which conveys
adjudicated truth of circumstance, revealing
the darkness of man’s inhumanity to man.

Creative energy persistently flowed through paintbrush and pen,
sketching and articulating his experience on
storyboards of canvas and paper.
His subjugated voice roared reality and correctness,
shouting in colors of survival, adaptability and victory.

Images of black windows in his paintings were
transfigured to messages of light,
seeds of hope and promise
secretly germinating with
revelation for future generations.

Kenjiro’s freedom in 1945 released new synchronous energy,
validating his undeniable place in art history.
Continuing to nurture his artistic abilities as an
imperative for individuality and mental health,
his passion to paint modernist images
from grief and loss
propelled him to the status of
“prophet on canvas”.

It was the year of a silence so deep, only my spirit could hear it.
My generation sacrificed talented future leaders and fathers of our children.
My cousin Buddy returned from ‘Nam in a body bag.
His third term of service as an assault helicopter gunner abruptly ended,
spawning seeds of depression and despair in my family.
I bolstered my courage listening to Simon and Garfunkel’s “I am a Rock”!

Dylan crooned about “the times they are a’changin’”,
Peter, Paul and Mary placated our emotions with “Blowin’ in the Wind”;
Barry McGuire billowed prophecy in the truth of “The Eve of Destruction”.
The Jesus Movement was expanding across the globe, while
Martin Luther King’s “I have a Dream”, incited unprecedented courage and hope!
In the shadows, Janis Joplin championed screams for all of us.

It was my junior year; I was an active member of the Debate Team.
Every spring the local VFW sponsored a debate forum on a current political topic.
For spring 1966, the topic was the Vietnam War.
When given the opportunity to speak, I postured a question…
“What is that sound I hear?”
I ranted about the “sounds of war”…gunfire and bombs,
heart cries of trauma and fear, crashing aircraft and jet-fueled fires,
the wailing of innocent children slaughtered by the war machine, and
unforgettable reverberations manifested by war on the next generations.

I was astonished when I was awarded second place in the debate,
but not as surprised as my Father who now recanted
his position of “when I want your opinion, I will give it to you.”
After this recognition, I had earned my “voice” and his respect.

Our nation has participated in a keening cacophony of war noise since 1861.
Are we really listening, learning and pursuing
what we are called to do as stewards of the written word?

In retrospect, as I compiled memories and annotations to compose this prose,
I realized the debate was my first assignment as a “messenger”,
a mission which permeates all my writing, both past and present.
My voice is an annointed roar; the enemy retreats at the adjudication of truth!!! 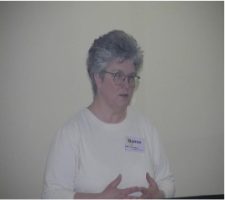 Donna began writing poetry and prose during her adolescent years living in southeastern Pennsylvania. An active participant of several writing groups in the Puget Sound area, she is an award-winning EPIC poet and teaches poetry workshops. Her work by her has been published in Soundings from the Salish Sea in 2018, the Skagit River Anthology in 2020 and previous issues of the My Edmonds News Poet’s Corner. She was one of several poetry readers for Epic Group Writers Poets at the 2022 Day of Remembrance for Japanese Americans held at Cascadia Art Museum in Edmonds. She’s a retired technical writer and enjoys filming the wildlife near her home in the Cascade foothills of Arlington. You may contact her at donna.beamer66@gmail.com.