The Federal Government is slashing arts and cultural funding by winding up its COVID-19 support package far too early, say industry researchers.

Meanwhile forward estimates paint a dire picture for government film and television investment, particularly for funding body Screen Australia, as well as a big reduction in funding for regional arts.

Dr Ben Eltham, a lecturer at Monash University’s School of Media, Film and Journalism, tells lime light there is “grinding austerity baked into the next three or four years.”

The 2022-23 federal Budget brings the final $20 million payment in the Restart Investment to Sustain and Expand (RISE) fund, even as Australian arts and culture has barely begun to emerge from a devastating two years of continuously enforced shutdowns alternating with several audience limitations .

RISE was part of the $250 million arts sector relief package the Federal Government announced in June 2020 that was widely criticized for allocating less than half for direct financial assistance to producers and arts organizations.

The RISE program itself faced criticism for severe delays in the flow of funds and for its failure to significantly help small to medium arts companies. Many freelance and casual artists and cultural workers meanwhile were shut out of the JobKeeper program.

Eltham, the co-author with economist Alison Pennington of The Australia Institute’s July 2021 report Creativity in Crisis: Rebooting Australia’s Arts and Entertainment Sector After COVID, sees RISE as having been a positive. “Some people in the sector don’t like RISE because they feel too much has gone to commercial stuff, but I think it’s been a reasonable stimulus,” he says.

“Now it’s finishing, but the sector is still in trouble. Audiences are not back to 2019 levels: not even close. Some venues are still facing density restrictions.”

A table from the 2022 Budget showing expenditure on the Arts. Source @NickFeik on Twitter.

“In some ways, Screen Australia has been a victim of the government’s enthusiasm for big foreign productions,” says Eltham, “so in the last year they’ve tipped a lot of federal money into one-off incentives to big Hollywood movies shooting in Australia, and it seems like the victim of that [winding up] is Screen Australia’s line item.”

A Screen Australia spokeswoman said: “The funding outlined in the Budget is actually a return to previous levels of funding after a period of additional funding announced in 2020 comes to an end, including $30 million over two years, $3 million over three years for script writing and development, and the $20 million SCREEN Fund. This won’t impact our ongoing funding programs.”

The cuts come as Screen Producers Association Chief Executive Matt Deaner told the Screen Forever conference on the Gold Coast this week that the Federal Government’s decision to suspend local content quotas during the pandemic, followed by a relaxation in drama, documentary and children’s sub quotas, had led to commercial free-to-air television halving its investment in Australian drama in 2020-21.

Deaner also criticized the government for its “slow, protracted and largely ineffective proposals” to compel streaming services such as Netflix and Prime to commission more Australian productions.

Dr Meg Elkins, an Applied and Behavioral Economist at RMIT University, tells lime light she is “incredulous” about the federal Budget’s arts and culture funding for the coming years, and the looming end of the arts sector relief package. “You can clearly see that they think COVID’s over, and no more support is there,” she says.

“Last month we did see [Victorian and NSW consumption] spending on culture and recreation rise, by 11 percent from the previous month, but that was from a very low base; spending in December on arts and culture was in the negatives.”

“People are starting to return to culture, but we’ve lost a whole generation almost of artists… and the smaller institutions are fighting for survival.”

Given the Morrison Government is widely seen to be providing stimulus in other areas as a sweetener to be re-elected in May, why does it believe it can cut its support to the arts?

“It hasn’t been noticed,” says Elkins. “That’s what I’m most concerned about. What are the big papers saying about this? I struggled to find [news coverage] beyond Twitter. … There’s a delayed effect for people understanding how much has been cut from the Budget.”

“The regions got propped up previously, so [the Federal Government] did put more money into regional arts. They were trying to regenerate tourism through cultural spending … and it makes sense to do that when people aren’t traveling overseas, and it’s gone back to pre-COVID numbers.”

But Ben Eltham says the fall in regional arts funding is “bizarre”: “I live in a regional community now, and that stuff’s important. The little gallery in a small town, that’s a real hub for the community.”

Live Performance Australia criticized the Budget for falling “well short” in supporting the industry post-COVID. Chief Executive Evelyn Richardson said in a statement that the peak industry body was grateful for the “significant” support of programs such as RISE, “but we now face a new set of challenges as we rebuild and which require targeted measures to deal with ongoing COVID impacts, including further disruption due to infection and isolation and a critical skills shortage”.

Penelope Benton, the Executive Director of the National Association for the Visual Arts, tells lime light the Budget was a missed opportunity to “invest ambitiously in the arts industry”, given the release last November of the Federal Government’s final report, Sculpting a National Cultural Plan: Igniting a post-COVID economy for the arts, in its inquiry into Australia’s creative and cultural industries and institutions.

“To say that we are disappointed would be an understatement,” says Benton.

While there is a small amount of money yet to come in the RISE fund, the visual arts sector had been largely ineligible for that program until late last year when eligibility criteria were changed. “Even then, a lot of the projects labeled [by RISE] under visual arts were quite commercial-type work, so there hasn’t been any real investment in Australian visual artists or the Australian visual art sector,” says Benton. 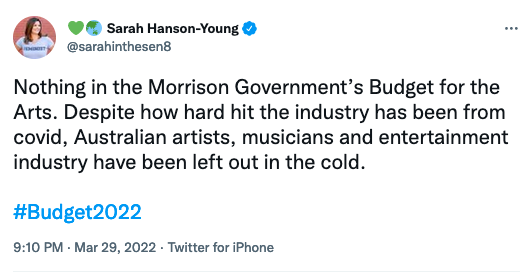 The government inquiry, which held hearings around the country, received some 500 written submissions, as well as almost 5,000 responses to a survey that Arts Minister Paul Fletcher put out.

“One of the 22 recommendations of the report was that the Government develop a national cultural plan to assess the medium and long-term needs of the sector,” says Benton.

“It would make sense, particularly as we head towards an election, that the Government would demonstrate its commitment to its own inquiry, and invest something into the development of that plan and the sustainability of the industry.”

Dr Helen Rusack, a Senior Lecturer in Arts Management at Edith Cowan University, said Australia ranks 27th out of the 33 OECD countries in cultural expenditure. The university’s research found COVID had compounded “the increase in the last ten years of direct intervention of government in funding decisions and interference in arts grant decisions”, Rusack said in a statement.