In-person events are coming back. Life is getting closer to “normal.” 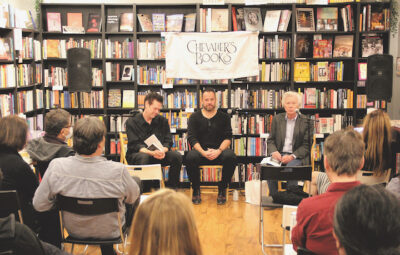 That book event followed another in-store event on March 2 on a decidedly different topic: bartending! Joining authors Cedd Moses and Erik Cardona to talk about their new book, “Pouring with Heart,” was interviewer Darryl Holter of Hancock Park. Holter is one half of the local duo (with Bert Deixler of Windsor Square) that saved the oldest independent bookstore in Los Angeles by buying it and moving it to its present Boulevard home — its third in its 82-year history on Larchmont — at 133 N. Larchmont Blvd.

The Marionette Theater is having another in-person event on Sat., April 9 at Los Angeles State Historic Park. This event will feature a carnival, live music, crafts, games and, of course, puppets. The event is free for everyone. Learn more at bobbakerday.com. 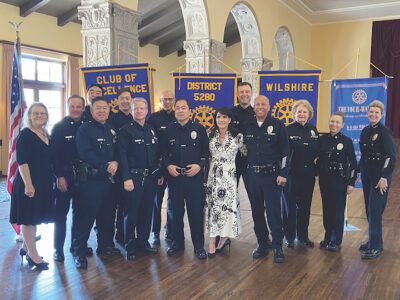 WILSHIRE ROTARY CLUB honored LAPD Reserve Officers from Olympic and Wilshire Divisions at the club’s monthly luncheon in March. Also honored at the event, held at the Ebell of Los Angeles, was Karla Ahmanson (center) of the Los Angeles Police Reserve Foundation and police reserve members including her husband, Bill Ahmanson, fifth from the left.

Also on March 2, the Wilshire Rotary Club returned to its in-person monthly luncheons at the Ebell Club. At the luncheon, the club honored the Los Angeles Police Department (LAPD) officers from the Olympic and Wilshire divisions as well as the great work of Hancock Park’s Karla Ahmanson and the Los Angeles Police Reserve Foundation, of which Karla is co-president. The LAPD Reserve Corps has a distinguished history of service to the community since 1947. Learn more at laprf.org. 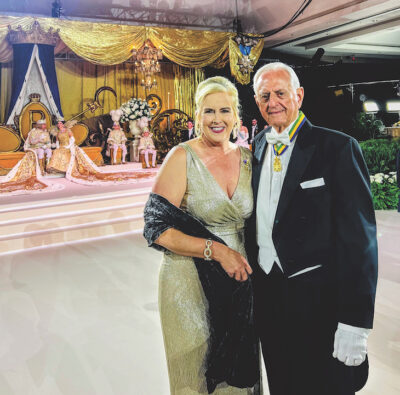 THRONE OF REX, King of Carnival at Mardi Gras in New Orleans, is behind Peter Landay and his niece Mary Nelson. Both of Windsor Square, they were in New Orleans in late February for the return of Carnival. They are descendants of the original Rex.

People are not only getting out of their houses again, they are also traveling longer distances. Windsor Square denizens Peter and Suz Landay, along with niece Mary Nelson, flew to New Orleans for the return of the annual Mardi Gras parades and balls this year. The year 2022 marks the 150th anniversary of the Rex Organization. In 1872, Lewis J. Salomon was the first Rex, King of Carnival.

Anticipating a visit from the royal family of Russia in 1872, and therefore wanting their own royalty to greet the Russians, cotton merchant Salomon and a group of fun-loving prominent citizens, including the newspaper owner and various bankers, got together to raise the $5,000 necessary to pay for a parade, parties and a ball. Mardi Gras is now one of the biggest events in the US and, perhaps, the world.

Peter Landay is the great grandson of Lewis Salomon and was so recognized on March 1st at the Rex Ball, where Landay was awarded a ducal medallion similar to that presented to his famous ancestor. You can view four hours of the 2022 Rex Ball on YouTube at bit.ly/36HObL5 — with Peter’s first appearance at about the one hour, 37-minute mark!

Families in Windsor Village (Wilshire to Olympic, Crenshaw to Lucerne) also are getting out and about. The Windsor Village Association (WVA) hosted its first Movie in the Park event in two years on Sat., March 12, screening the Oscar-nominated movie “Encanto” to an enthusiastic crowd of almost 100 neighbors. 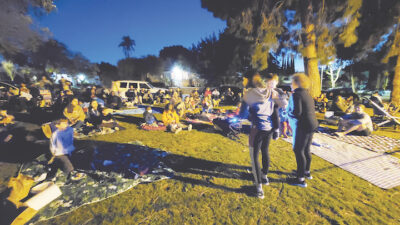 MOVIE IN THE PARK in Windsor Village was “Charming.”

The free event—in Harold A. Henry Park in the center of Windsor Village—was welcomed by children and parents as the return of a well-loved tradition. The WVA distributed free popcorn and candy, and neighbor Ikuno Kim offered Krispy Kreme donuts to the gathered residents. WVA president Barbara Pflaumer recounted to us: “It was a terrific event that will be repeated again in the fall.”

In February, members of The Godmothers gathered in person to present to Bonnie McClure, chair of the Associates and Affiliates of Children’s Hospital Los Angeles (CHLA), a $2.5 million contribution to the hospital on behalf of the Las Madrinas members. The gift — a record for Las Madrinas — resulted from a year in which 56 families were honored in December at a combined 2020-2021 Debutante Ball at the Beverly Hilton Hotel.

The funds complete the $5 million Las Madrinas Endowment for the Chief of Neurology Chair and the Neurological Institute Epilepsy Program. A portion of the gift also marks the beginning of a new $5 million pledge to the Las Madrinas Diagnostic Innovation Endowment at CHLA. 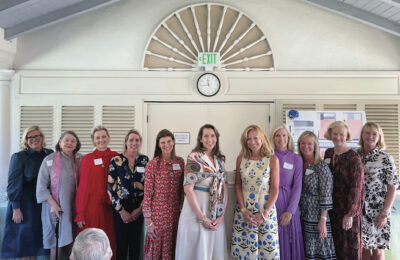 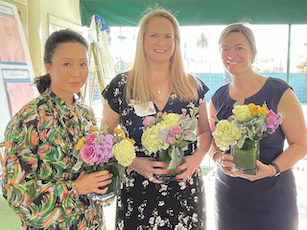 The new board of directors for 2022 was elected, and three new Las Madrinas members — Sujie Ha Min, Mary Catherine Kribs Loureiro and Neville Wallis Anderson (of Hancock Park) — were introduced.

The crowds continued to gather in mid-March, albeit outdoors in the case of Big Sunday. The organization’s seventh annual gala welcomed 300 people and honored Larchmont locals Charlie Hess and Aliza Lesser. 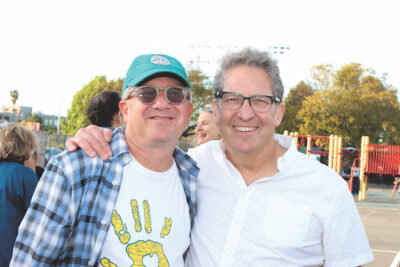 Many Assistance League of Los Angeles volunteers and beneficiaries were out and about in nearby Hollywood on March 16. “Not one, not two but three dresses!” was just the start of what girls who attended carried away from the 12th annual Prom Day! The happy event took place at the League’s new chapter house after a two-year hiatus because of COVID-19. 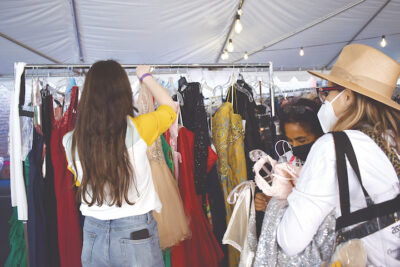 PROM DAY! shoppers look through one of the many racks of dresses. 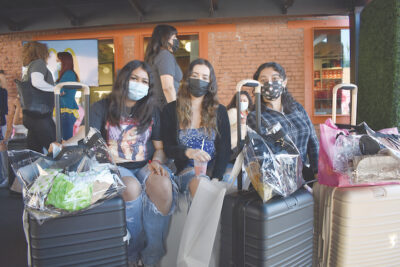 EXHILARATED SENIORS with their goods after shopping for prom. From left to right are Ofelia Collazo, Ashley Rosen and Sarah Segura.

Prom Day! is a pop-up boutique (organized by the Assistance League’s Operation School Bell) that helps more than 200 at-risk, homeless and foster students of the Los Angeles Unified School District (LAUSD) each year. The students receive party attire so they can attend their proms.

All of the items available were brand new, and the quality and quantity of merchandise was impressive. There were racks of colorful and sequined dresses, shelves filled with shoes and tables covered with jewelry, shawls and hair accessories. A bonus this year was that everyone received a rolling suitcase to fill with jeans, sweatshirts and skin care products. The amount of stuff each girl left with was extraordinary.

Each girl was chosen by her school counselor based upon academic excellence. All attendees are on track to graduate high school. With thousands of LAUSD students being homeless, the district is especially appreciative of this event. “The school counselors look forward to this event all year. It gets the kids excited for prom,” said Dr. Denise Miranda, Director of Student Support Programs at LAUSD. 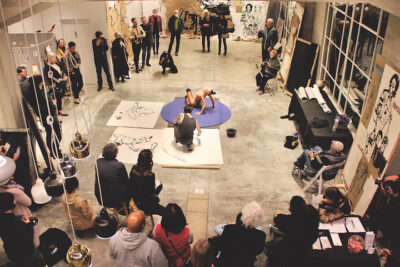 A further sign of getting back to normal is attendance at art-related events. The museums and art galleries in and around the Miracle Mile are seeing increased visitation, as are such spaces elsewhere in the city. An outing to the Helms Design Center in Culver City for the March 5 premiere of a new documentary featuring her work with street artist Inksap (Brandon Lam) found Windsor Square’s Linda Lack, Ph.D.. Greeting friends and admirers curious about Lack’s recent activities with the young street artist.

Through the documentary “Ink & Linda,” written and directed by Stuart C. Paul, guests learned about the recent years of the two artists’ collaboration. Learn more at inkandlinda.com.

All this activity is proof: there definitely are signs of life getting back to normal.