John Hodgman and David Rees know that their FXX/Hulu mystery is only as good as its (emotionally and encyclopedically dense) clues.

Imagine, if you will, a massive Venn diagram with aquatic salamanders, lesser-known passages from Revelations, “The Last House on the Left,” fried pork byproducts, and hot air balloons.

We can’t definitively state that Season 2 of the FXX series “Dicktown” is the lone inhabitant of that sliver in the middle, but it’s almost certainly the only animated detective show that also has an impish parody of Tintin arriving with fanfare at the heart of its sophomore season.

The show is driven by the same expansive web of Things that concerned its creator/writer/stars John Hodgman and David Rees, a creative engine that made its first batch of episodes in 2020 so distinct. “Dicktown” tracks the ongoing hyphenated tribulations of down-on-his-luck, out-of-work John Hunchman (Hodgman) and his foe-turned-friend investigative partner David Purefoy (Rees).

This new season, available to stream on Hulu, is still parceled out in 12-minute segments (it’s been airing weekly in pairs on FXX in half-hour blocks). But rather than revive their Hanna-Barbera/Donald J. Sobol hybrid by returning to the same formula, Rees and Hodgman wanted to use their new chance at new episodes for something even more challenging than the taxing process of making an animated show in the first place.

“One of the missions was from Matt Thompson, our executive producer at Floyd County, to make it a little bit more visually ambitious as well. There are a lot of shows of two guys talking to each other. So we took that to heart and we tried every time to think where we could take these guys that looked different,” Hodgman said. “Hunchman’s Mind Palace, when he goes into his memory of him and visualizes it, that was sort of based on the scene in ‘Yellow Submarine’ where Ringo and the Beatles live in a house full of doors behind which is a different world. It’s partially an homage to that.”

That process of spinning a season-long story this time around involved an odd combination of taking more control of the process in some places and ceding it in others. For a few episodes, Rees and Hodgman each added “director” to their growing collection of hats on “Dicktown,” all while leaving room in their scripts for other sources of humor to help fill out the show’s range.

“A big thing this season was trying to come up with space for the animators to make their own nonverbal jokes that weren’t in the script,” Rees said. “We’ve been trying to learn, because we’re both very verbal, to leave directions for visual humor. And audio humor, too. There’s one moment, it’s so dumb and such a cliche, but we do a sad trombone. And I think it’s so funny. It’s a cartoon. Just go crazy.”

“The animators at Floyd County are young people who play games. I think they dug the Animal Crossing reference a little bit more than all the Jorge Luis Borges references that I was dropping. I know that my people are out there getting those secret messages,” Hodgman said.

Adding these extra layers took them further away from the beat-by-beat expectations of a detective story, but that ended up being far more of a feature than a bug. As a result, “Dicktown” becomes the kind of mystery where the clues still add up to a satisfying conclusion, but they can still be details that on their own help the show look and feel distinct.

Of course, those lows end up making the highs that much more enjoyable. Maybe this season’s most entertaining diversion is “The Mystery of Meg’s Extremely Violent and Inappropriate Musical,” where John and David find themselves an integral part of a high-schooler’s visionary operetta ode to ’70s slasher movies. (Rees and Michael Penn wrote the songs for the episode, one of which opens with a character memorably singing, “You fucked around / And now you’re gonna find out!“) One particular event proved to be perfect fodder for John and David, in both their animated and real-life forms. It resulted in the arrival of the aforementioned Pon-Pon, a not-so-subtle reference to another ageless detective.

“Once we were in Atlanta doing a show and we were staying in this hotel. We kind of crashed this wedding reception after party. There was one guy there who made a really strong impression on John, especially, because he was just so confident,” Rees said.

“It was this tall, skinny French guy who was just holding court and charming the eff off of everybody, including me, but I just couldn’t handle it. That line that Hunchman says, ‘The one thing I can’t stand is a confident European,’ that’s very much taken from that moment,” Hodgman said. “The idea that it should be an homage to Tintin popped up very, very quickly and slotted right in. Tintin is technically a boy reporter who never works. He’s also an adult, but he is also a boy and that ambiguity is very troubling to me. So we had to make him into an asshole.”

Season 1 of the show, which aired as part of the always surprising FXX shortform collection “Cake,” wasn’t exactly frivolous. Yet, there’s some added emotional depth in this round of “Dicktown.” Marriages crumble in real time in the show’s version of Animal Crossing, friendships nearly drown at the bottom of a vat of doll hair, and what starts out the season as a punchline (“Operation Grow-Up”) ends up becoming an honest look at two men genuinely crushed by some of their own life choices.

“I like the movie ‘The Avengers’ very much. And occasionally I’ll make a reference to ‘The Avengers.’ The one that I make some times is, as a middle aged man, ‘That’s my secret, Cap. I’m always crying,’” Hodgman said. “The challenge is not to go there right away. One of the things that we like about the show is we’ll take absurd situations and even outsized, weird characters, but remember that they’re real human beings. I don’t think that there are really any caricatures.”

The pair acknowledge that theirs is not a typical path to a standalone season of animation. “Dicktown” was birthed from the opportunity to fill a slot for “Cake,” but even if this show hadn’t been the product of a roundabout commission, Rees and Hodgman had enough previous experience in animation and other spiritually connected creative projects to know that it doesn’t make sense to stray too far from what naturally intrigues you. 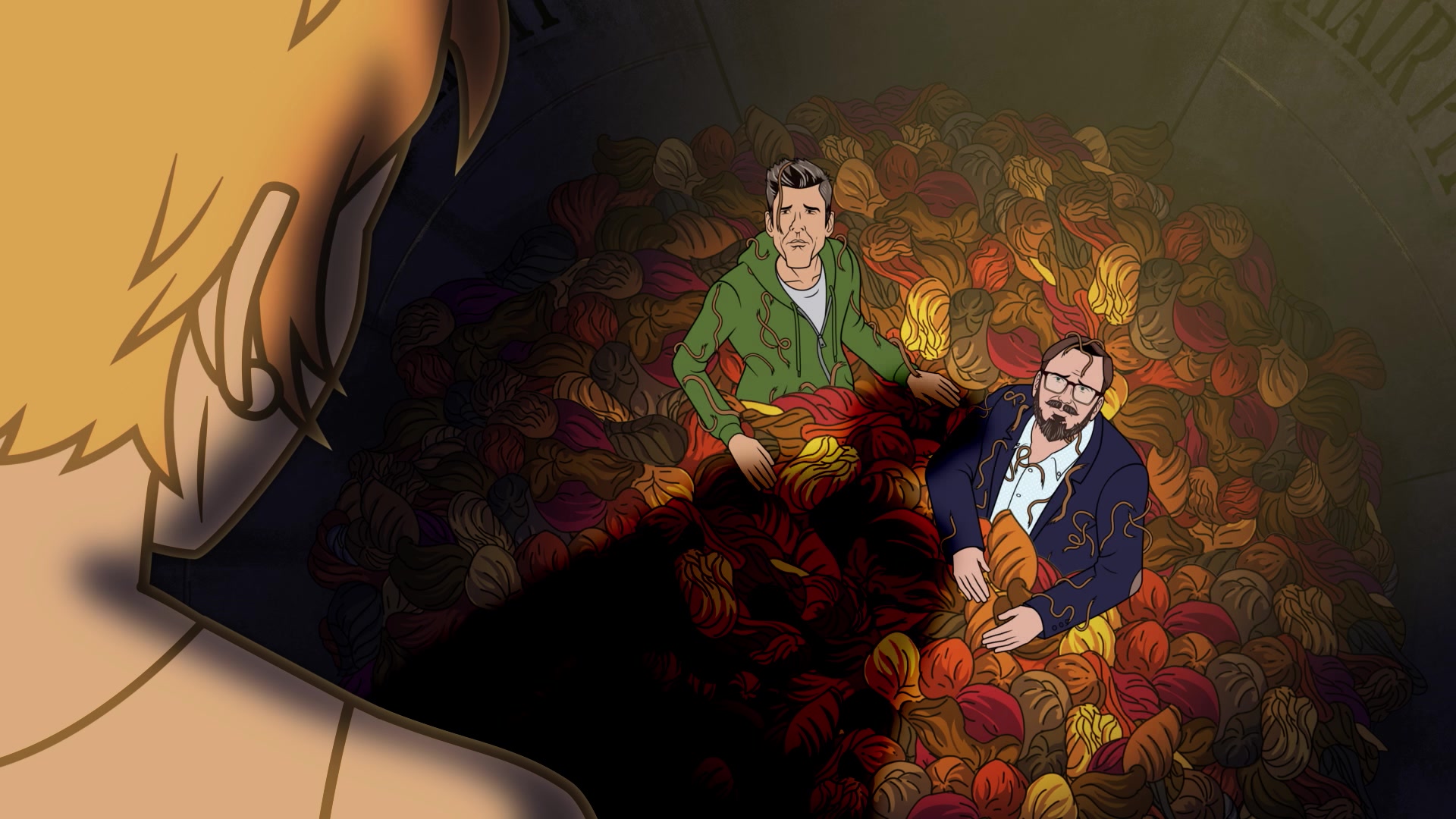 “Make sure you’re fond of your characters and respect them. The big thing for us was to make the most of the medium and have fun with it visually. It should not just be a drawn version of a live-action show or an illustrated version of a funny script or short story. There’s just a lot of opportunity there,” Rees said.

“I don’t necessarily want to say, ‘If you put a bunch of 2-XL and Chapel Hill references in your thing that maybe one day, you’ll get to be on Hulu. You should aim for more, listener,” Hodgman said. “You’ve got to tap into the thing that makes you happy and excited or interested or provokes you and try to bring that forward. Writing what you know is really important, but also knowing what you know is the hard part, too. Figuring out what your obsessions are and and how they might work into a story.”

“Dicktown” Season 2 arrived ready for audiences roughly a year after the pair got the go-ahead to start working on it. Rees said that quicker-than-usual deadline wasn’t just a helpful focus, it was a relative relief, one they both would welcome again.

“There was one point in the middle when we were noting some episodes and still writing the back half. There were a couple weeks where it was really crazy. But all in all, I liked how quickly it went. I don’t like sitting around waiting,” Rees said.

“Dicktown” Season 2 is available to stream on Hulu.