In an interview with TNM, Dalit poet, intellectual, and publisher Sathy Angamali speaks about her latest book ‘Pookkalude Vedapusthakam’, the politics behind her poems and the social position of Dalit women writers in Kerala.

A poet, intellectual, and publisher rolled into one, Sathy Angamali, who recently came out with a new collection of poems Pookkalude Vedapusthakam (the scripture of flowers), has not had it easy. Having spent a lifetime battling the limitations forced upon her by the society as a Dalit woman writer, Sathy dealt with all that angered and upset her in the best way she knew – by putting them down in words. She became dejected every time Kerala chose to celebrate a Dalit woman writer from another state, forgetting those in the state.

Sathy has taken part in a South Korea Asian cultural program in 2017 and spoken on the topic of The Capital, speaking of caste as the Indian capital. In 2021, she attended the international book festival in Sharjah as a publisher and poet.

In an interview with TNM, Sathy speaks about her poetry, the politics and stories behind it, and the position of Dalit women writers in Kerala.

I saw a picture from the Ukraine-Russia war front recently. It was of a child quietly hiding by a fence upon seeing the army. Though the picture is from so far away, it touches our hearts. We cry for the child, hoping that nothing bad will happen to it. I understand this as a spiritual bond that all humans naturally share with each other. The face of every abuser looks the same to us. It is from that pain or sense of justice we feel within that Pookkalude Vedapusthakam takes birth.

Could you speak about the politics behind your poetry?

I look at reading and writing as a social as well as cultural intervention. For me, writing is not merely for pleasure. It addresses our history and contemporary politics sharply and seriously. My sense of justice lies in standing with the people who are discriminated against on the basis of caste, religion, gender, color and race, people who are denied their rights with no consideration that they are also human. My poetry comes from that sense of justice.

What space has Dalit woman poetry garnered in Malayalam literature?

Dalit woman poetry can be placed in the post-modern era of Malayalam Dalit poetry. My book theemarangal (trees of fire) came out in 2011. It was in the same year that Remya’s (another Dalit writer) poems came out. MR Radhamony’s poetry came in 2012 and Dhanya MD’s in 2014. These women broke the traditional social order put in place by mainstream women writers, and instead opened the door to a new world that allowed the examination of Dalit social life, its beauties and cultural intricacies. .

In terms of both language and expression, this was a new dimension. It went against the mainstream standards of beauty, and presented historical and political diversities in culture. Traditionally, Malayalam poetry has always kept away the creative beauty of Dalit women from the mainstream. For example, whenever the mainstream media talks about Dalit women, they celebrate writers of other languages. They pretend not to see Kerala’s own Dalit women politics, which questions the caste awareness, aesthetics and the dominant caste power internalized by Malayalam culture. Dalit women stand in a complex place layered by social conditions including caste, society, finance and gender.

Can you talk to us about some of the poems from your book?

The trigger behind Ottachela was a photograph by Ajeeb Komachi published in the Mathrubhumi Weekly. Through the poem, I have tried to express the life and survival of people who fall victims to various attacks and injustices. It is specifically about the social situation of a people who had to drown their dead in the lake because there was no place to bury them. Metaphorically, one end of the beer is wrapped around a body and the other end is dried in the sun.

poem Pencil is not a fight against the world, but rather, it is trying to overcome the obstacles it faces and come closer to life. It holds onto the possibilities of drawing and writing (as a pencil). The memories that were erased still remain. That is the politics of the poem. I think that Pencil marks the survival history of my people’s politics, thoughts and expression.

As a writer and a poet, what is it that inspires you the most?

The inspiration to write poetry does not appear in the same way every time. Sometimes a thought takes over your mind like someone has meticulously placed it there. All you need to do is put it down on paper. Other times, you will have no clue what to write. Everything will be cloudy. Sometimes as you write poetry, you fall into an ecstatic trance.

But writing articles is a different process altogether. You can’t move away from historical and contemporary political realities. You will have to stand closer to facts than your imagination. I become a poet only when I write poems. What else can a Dalit woman do? They do not have the burden of turning into a Madhavikutty or an ONV.

There is a very painful experience I want to share. None of us expected the magnitude of the 2018 floods and the destruction it caused. The rescue work carried out in Kerala, especially by fishermen, was appreciated across the world. Even Facebook worked like a police control room those days. Apart from government agencies, several NGOs, social and political business groups and cultural groups worked together. Many people volunteered to work day and night for the camps. Tens of thousands of relief camps were operating in every district. However, the situation of women and children in these camps was pathetic. In this regard, human rights worker and singer Raghu Eraviperoor had put a post saying that bras and panties were needed in camps. However, a councilor from Thiruvalla filed a case against Raghu, arguing that he had insulted women by writing ‘brassiere’ and that he should have written ‘underwear’ instead. He explained that when they asked for underwear, it was usually men’s garments that reached the camps. However, he was still arrested by the police. As a protest, I had written a poem’Bra Enna Bra’ (the bra called brassiere), which went viral on Facebook:

Translation: The bra called brassiere
And the undies called panties
Will now be known as the ‘Ponnapuram Fortress’
and ‘Thacholi Marumakan Indica’ 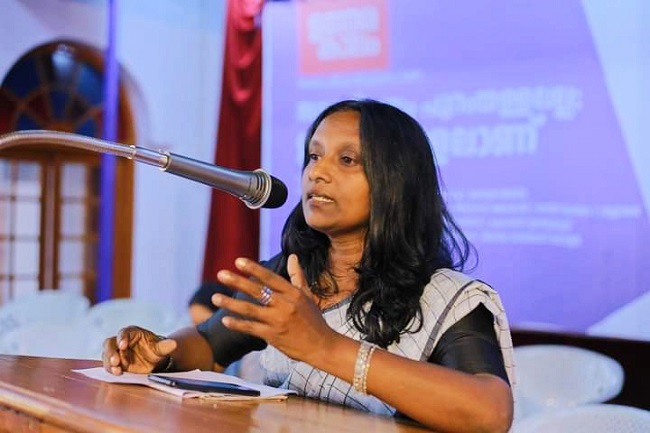 You are a writer, political analyst and a publisher at the same time. How has your experience been taking on so many roles?

All of us exist in unequal social positions defined by differences in caste, religion, race and colour. Though the Indian Constitution promises every citizen the right to live with pride and dignity, we know this is not what happens. It is despite the limitations imposed on me as a Dalit woman that I do all this (writing, publishing etc). It is only possible to rise up by overcoming different kinds of power tactics. My only capital is my energy, the courage and the faith with which I make that decision. That is what I mean when I write ‘jeevitham tharathe poyathokke njan bhavana kondu bhogichedukum’ (‘Whatever life has denied me, I will indulge in with the help of imagination’).

I am not just an individual. I am a representative of a community of people who are victims of several attacks and injustices. I have to do all that I can, so that I do not have more complaints about life or fights with the world. The women among my people have the energy to overcome any obstacle. I have strong faith in the saying’kuthiyodathu mulakkum‘ (it will bud where it is planted).

What is your take on the identity politics of Dalit women?

Feminism gained momentum across the world with the identity politics of a group of elite class women. It progressed by completely ignoring the social positions of caste, religion, race and region. It was criticized by black feminists, Dalit feminists and womanism of writers like Alice Walker, and the different branches of Islamic feminism. New feminism arises when you consider social and cultural truths along with male domination.

What do we understand if we examine the women politics of contemporary Kerala? Dr B Ambedkar says, “I measure the progress of a community by the degree of progress which women have achieved”. This means that it is a necessity for women to rise to respectable positions. In fact, the only Dalit women society accepts are the ones who have risen to such respectable positions.One such woman is Dakshayani Velayudhan, who became a constituent Assembly member in 1946. Another person is Panjami, the Dalit child who held Mahatma Ayyankali’s hands and sought education (in 1910). freedom from colonial powers in 1947, it was a Dalit woman called Janamma who led a Dalit social organisation.There was no woman heading any other national organization at the time.The first heroine in Malayalam cinema is PK Rosy, a Dalit woman who was later chased away from her homeland for acting in it.

But today, who holds such positions in Kerala’s political space, cultural and social fields? Only the dominant caste women. This has been standardized. Or else, why are these positions not shared with Dalit Adivasi women? This has become a part of the system that no one will question. We will, however, be invited to the kiss of love and Sabarimala protests. Maybe society has a faux understanding that everyone is equal when it comes to these matters.

What do you have to say on the visibility afforded to Dalit women in Kerala?

There is visibility, but it is not an easy process. There are two reasons for this. One is social in nature. Women in dominant communities have the political power to get every kind of facility provided by the state. Within and outside the community, they will get the benefits provided by patriarchy as well as the state. They will stand with the state indirectly. But those who come out of the shackles of their community will take over the streets with anti-state protests. If you take a look at our own cultural history, Malayalam’s first heroine PK Rosy had to leave town because of casteism. What about the story of another icon that oppressed caste women always admired – Unniyarcha? Wasn’t that admiration destroyed with a single movie – Oru Vadakkan Veeragatha (1989)?