The adage that life doesn’t move in a linear fashion but makes turns and doubles back, is apt for food influencer Alexis deBoschnek. Born in New York City, DeBoschnek moved to Delhi with her parents de ella, both artists, at age two. She grew up in a big farmhouse with Icelandic horses and chickens. “If you didn’t cook, you didn’t eat,” she says during a phone interview while reminiscing about the death of restaurants back then compared to the Catskills today. After stints in New York and Los Angeles, the 31-year-old is back home again, and her first book of her, To the Last Bite (Simon & Schuster, due out April 19), pays tribute to a rural upbringing that taught her about resourcefulness, flavor, and family.

From Soil to City

“Working in food media over the last decade, I’ve heard all the buzz words about sustainability, and cutting down on waste, but people didn’t really know how to do that,” deBoschnek says. In high school, she learned to garden, use a chainsaw, and tap for maple syrup. “I took it for granted, knowing how to do these things,” she says. 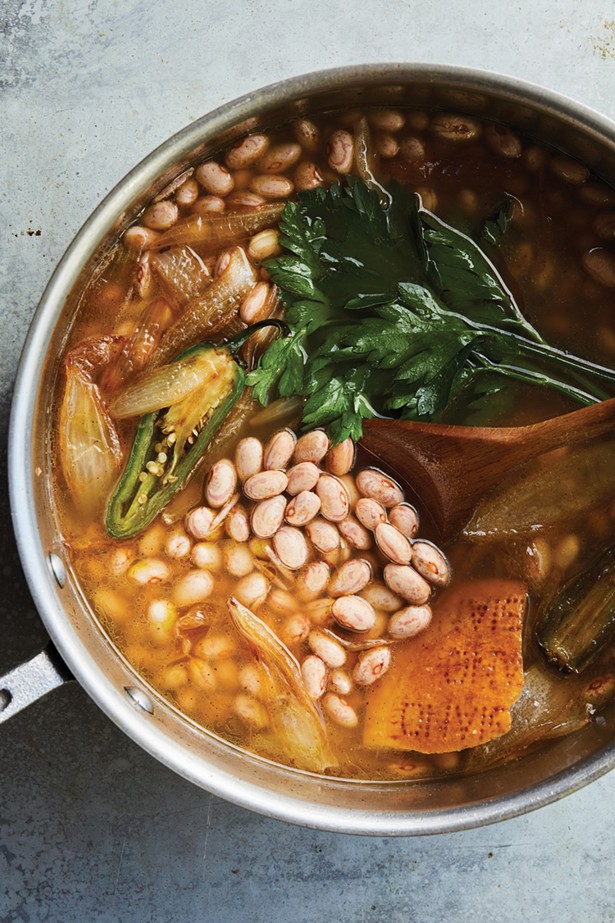 Growing up amidst farms, she discovered at an early age what many American children and adults still rarely experience: fresh, ripe flavor. Whether a carrot dug from the dirt, or a blush tomato plucked off the vine, she learned how vegetables and fruits could—should—taste. “In this book, I keep going back to the way I was brought up because there was such a dedication to our food sources,” deBoschnek says.

While her background sounds like a natural fit for the recipe creation and writing in which she’s now engaged, deBoschnek didn’t always imagine this world as her future. Like many youths raised in the quiet hinterland, she dreamed of escaping.

After graduating high school early, deBoschnek took a year off and fled to Paris. Fashion piqued her interest in her, so she returned to New York to the Fashion Institute of Technology. During school, she took an internship at a trend forecasting company. “They were talking about the Pantone color of the year, Mango Tango, like it was groundbreaking. It was very Devil Wears Prada. I just remember sitting there thinking, ‘What am I doing?’” she says with a laugh, recalling the pivotal moment.

The summer before her senior year, deBoschnek read Ruth Reichl’s Garlic & Sapphires: The Secret Life of a Critic in Disguise, which moved her to pursue food writing. She applied to an Eater internship while wrapping up school, then finagged a job as an editorial assistant at Tasting Table. Before she could frame one degree, she had moved on to the next: culinary school at the International Culinary Center in Manhattan. “I felt like I needed to work in a restaurant or go to school, and I knew I didn’t want to work in restaurants; rather, I wanted to create recipes for home cooks,” she says.

One Road Leads to Another

Many great tales start with “I followed a lover to California.” While those stories often involve a break-up, a relationship’s demise rarely concludes the narrative but rather serves as a preface. For Alexis, Los Angeles, not the boyfriend, proved transformative.

“I thought I would hate it. I thought I was a New Yorker,” she says. The couple arrived in California in November 2014, at a time when New York’s trees had shed their leaves and gardens had wilted to the ground. “We got there, and the sun was shining, and the raspberries were ripe and delicious,” deBoschnek says with the rapture of meeting a new amour. 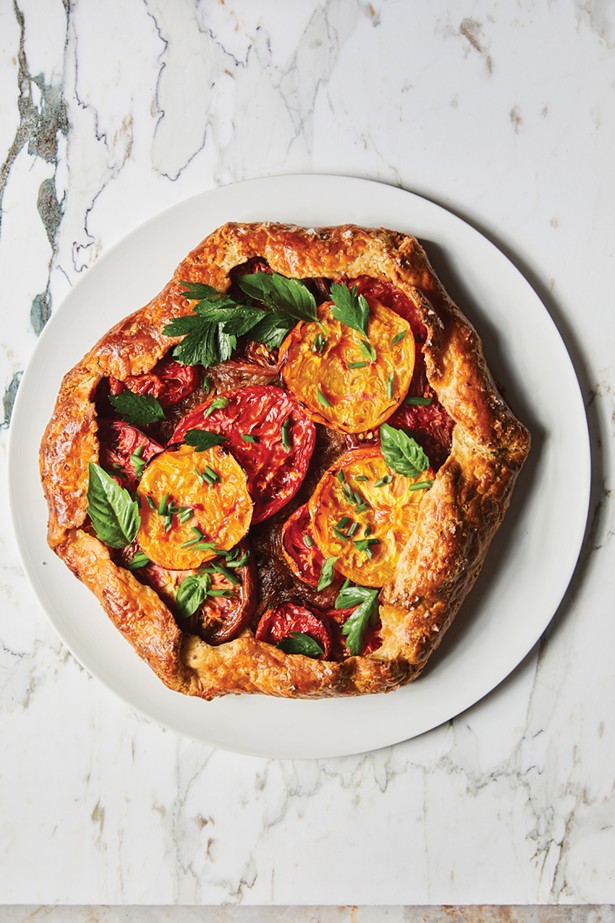 She got a job working at Good Eggs, an online grocery store envisioned as a farmers’ market to your door. Unfortunately, the digital retailer closed its Los Angeles, New Orleans, and New York locations suddenly. DeBoschnek then took a job with a catering company and hatched a business plan for a grocery store in LA’s Chinatown that never panned out. Then she applied for a job at Buzzfeed.

“That job launched everything” she says.

DeBoschnek never aspired to act—she was hired to manage the test kitchen in Los Angeles—but the position pushed her in front of the camera, which she ultimately found exciting. “I got to create recipes while bridging this new space of entertainment and education,” she says.

As on-camera talent at Buzzfeed’s culinary content channel Tasty, deBoschneck hosted the video series “Chef Out of Water” and “Friend in Town,” which racked up tens of millions of views.

In “Chef Out of Water,” a mashup of game show and culinary class, deBoschnek had to create a three-course meal with a surprise household appliance like a dishwasher, toaster, or power tool. “The show was insane. More people are cooking with weird appliances, now but at the time, people hadn’t done that. I wanted it to be food I’d make at home, something a bit more elevated and exciting and if you did eat it, you’d be surprised that it could be done. People were intrigued,” she says.

The first episode featured de Boschneck making a shrimp salad, poached salmon and asparagus, and chocolate truffles with a coffeemaker. The video got one million hits in 24 hours.

Three years ago, she left Buzzfeed for the uncertainties and freedom of the freelance life, and hasn’t looked back. She creates recipes for publications like food52 and kitchen. Controlling her time gave her the chance to pitch a deeply personal project, To the Last Bite.

Home Is Where the Table Is

DeBoschnek sold To the Last Bite while in Los Angeles, but momentum spurred by a global pandemic swept her home, to her mother’s farmhouse. (Her parents de ella split years prior.) She moved in with her fiancé in October of 2020 to save money while seeking a change of scenery. “We loved it so much we ended up staying,” she says.

The move altered the heart of the book for the better. “I thought we’d photograph it in LA, but when I got back to Delhi, I realized there never could have been another setting for it but the Catskills,” deBoschnek says.

Indeed, To the Last Bite features beautiful photography that captures the mood of the rural mountains, from gravel roads cutting a swath through the summer forest to the timeworn cabinetry of a country kitchen.

The book is broken into familiar categories, from Snacks and Spreads to Vegetables and Seafood. DeBoschnek wanted it to be a comprehensive resource for home cooks of all skill levels with tips on maximizing ingredients and using leftovers in other recipes.

One chapter covers the soup-to-nuts of stocking a kitchen; another advises readers on how to start a victory garden, sage advice from the past that’s present for the future. DeBoschnek writes in the first person, simply and directly to the audience, as one friend to another.

Some recipes reference familial experiences, like her mother’s fondness for dipping fries in mayonnaise (she’s Dutch), noted in the recipe for poached shrimp with Thousand Island dressing. Others dive right into the guts of a dish, like how a simple bowl of farro with mushrooms can rise to heavenly umami heights with the mere addition of Parmesan and soy sauce.

As suits her upbringing, DeBoschnek focuses on producing. “I wanted the book to be vegetable-forward. Many of us are trying to eat better and I wanted meat and fish to be celebratory rather than a daily thing,” she explains.

One lesson the pandemic has taught DeBoschnek is that life, like a book, passes in chapters, each section filled with different people, places, experiences, and ideas, while a through line of food as literal and metaphorical nourishment holds steady. “Making food for people is my love language. I love seeing how people react when they eat something delicious. It’s my best way of connecting,” she says with a smile.

For DeBoschnek, her current chapter continues to unfold across the Catskills, doubling back, for now, to where she started.

To the Last Bite will be released on April 19th, 2022. For additional information, please visit alexisdeboschnek.com and follow Alexis on Instagram at @alexisdeboschnek