The annual Tucson Festival of Books reopened to in-person events this year. (Courtesy of Leslie Doran) 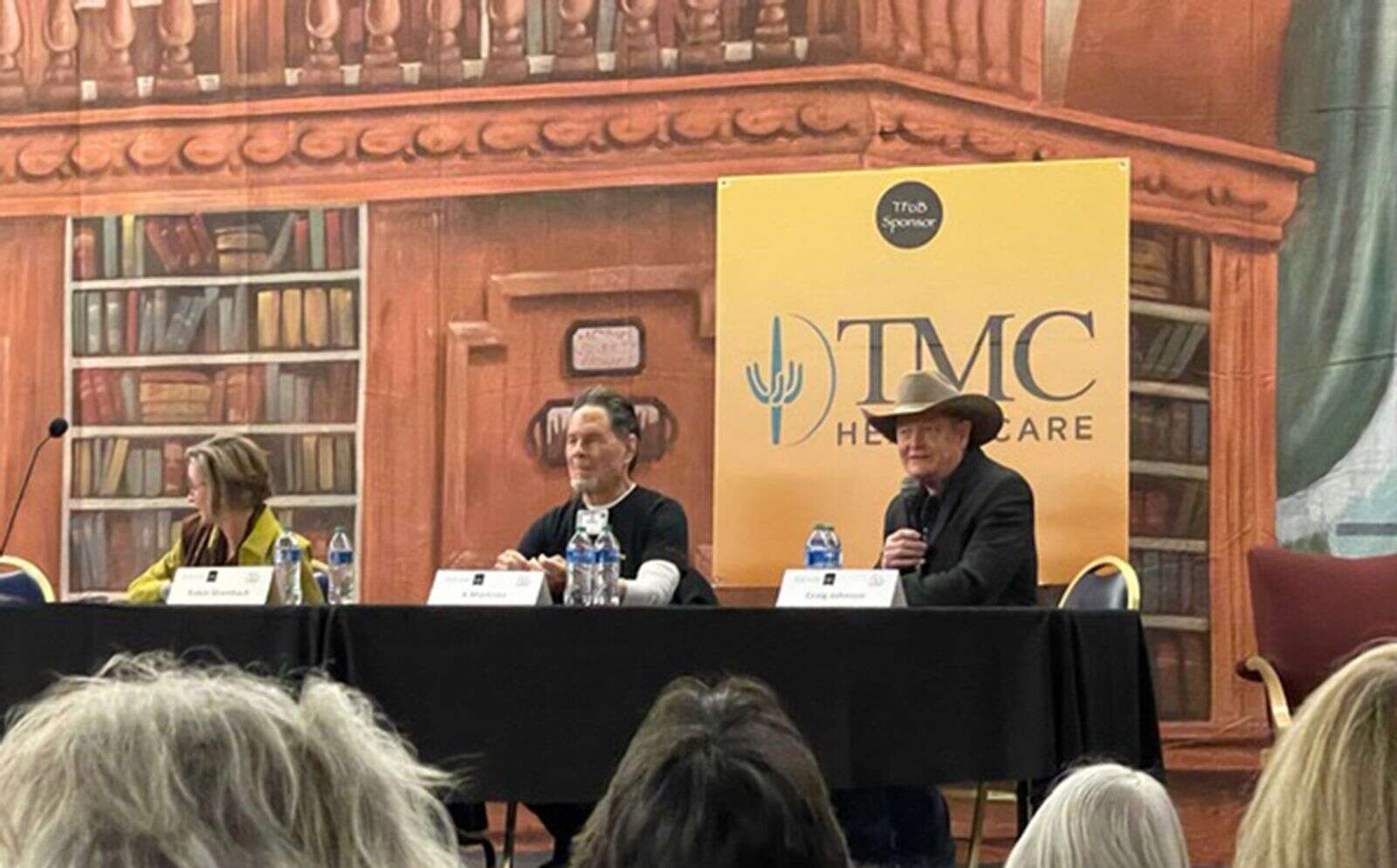 It was a wild weekend full of opportunities to see favorite authors, booksellers and much, much more, March 12 and 13 in sunny Tucson, Arizona, during the Tucson Festival of Books.

The annual festival is the brainchild of Bill and Brenda Viner, a dedicated couple who wanted to bring a large literary event to the University of Arizona campus. They have also managed to make this festival unique by making it free to participants, as a nonprofit staffed entirely by volunteers.

Once they had the idea, the Viners attended other festivals, including ones in Los Angeles and Texas. They also met with publishers in New York to build relationships and especially invited authors with local ties to Arizona to join the endeavor. They established a committee to select authors from many different genres. There were years of planning, which culminated with the first festival in 2009. They have continued the tradition every year with the exception of 2020. Thank you, COVID-19. Last year, the festival was held virtually, but this year, it was back to in-person events, and it was amazing.

The 2022 festival had 16 literary genres represented: children, teens, culinary, politics, fiction, humor, memoir, nonfiction, mystery, nature, poetry, romance, science, science fiction, sports and true crime. There were more than 100,000 attendees who were able to see 268 presentations with 267 authors. A major bonus for fans were the book-signings held after each panel presentation. It was an opportunity to personally meet and talk with the authors.

Authors included two National Book Award winners, two Pulitzer Prize winners and eight National Book Award finalists. Durango author and poet Esther Berlin was a participant this year. She won the 2000 American Book Award for her book “From the Belly of My Beauty.” Last year, she was one of the editors of the much heralded anthology of Navajo literature, “The Diné Reader.”

Other authors who attended this year’s festival will be familiar to Durango readers – they are mystery writers who feature the Southwest in their writing. JA Jance, who has attended every year, might be considered the grande dame of the festival. Jance was raised in Bisbee, Arizona, and is a many time New York Times best-selling author who says, “It’s my alma mater,” as why she is drawn to the festival every year.

Also it is one of the best-run ones she has attended. “The Viners go out of the way to meet the needs of all attendees.” One year, they even set aside a room for her to meet with 30 fans who were blind. Jance is committed to her many fans of her and keeps them well entertained with not one, but four series of novels.

Wyoming authors CJ Box and Craig Johnson are also fans of the festival. Box’s new novel, “Shadows Reel” was released the week of the festival and fans were thrilled to get him to sign their books. One benefit for Box, as he said: “… there are so many snowbirds from Wyoming, Montana, Canada and Colorado that are here now and a lot are fans and come here.”

Johnson says, in 2010, “they invited me and I turned to Judy (his wife) and said Tucson Festival of Books, is that something I should do? And she said, ‘It’s Tucson in March, yes!’” After attending several times, Johnson says, “This is one of the most spectacular book festivals in the world … the amount of people and the quality of writers they bring in … it goes along without a hitch. It’s really kind of wonderful.”

For more information about the Tucson Festival of Books, visit tucsonfestivalofbooks.org.

Anne Hillerman also loves the appeal of the festival. Speaking from her past experiences of her as a journalist and nonfiction writer, she loves “all the diversity, the chance to encounter other writers, and particularly the nonfiction folks … they bring in so many experts.” Local fans of Hillerman will be excited to know that she will be in Durango at the Rochester Secret Garden on May 4 to talk about her new book, “The Sacred Bridge.”

The festival also included exhibitors, which included books and many other offerings. There was a Science City for kids, a large variety of entertainment for all ages, and a food court. In keeping with the focus of the festival on literacy, each child who attended was given a free book. Over the years the festival has raised $2,100,000 to improve literacy in Southern Arizona and has given away 60,000 books.

The festival would not be possible without the support of the Tucson community. This vast endeavor includes members from the University of Arizona, Arizona Daily Star, TMC Healthcare, Pima County Public Library and many other businesses and organizations. One major way to support this worthy event is to become a Friend of the Festival. There are several levels of membership. One benefit of being a friend is the ability to sign up for tickets for panel presentations a week before the general public. Also, the larger benefit is helping to ensure that festival will remain free to the public.

“We are thrilled to be a part of a community celebration that brings so much joy, education and literary exposure to Tucson,” the Viners say.

The Tucson Festival of Books is an event that every Four Corners reader should try to attend. It is a smorgasbord of reading delights.

Leslie Doran is a retired teacher, freelance writer and former New Mexican who claims Durango as her forever home.