WBC and IBF welterweight titleholder Errol Spence Jr., The Ring’s No. 1-rated 147-pounder, declared that he is “on point” physically during a media workout in Dallas on Thursday ahead of his title unification clash against WBA beltholder Yordenis Ugas taking place Saturday, April 16, live on Showtime PPV in a Premier Boxing Champions event from AT&T Stadium in Arlington, Texas.

On Wednesday, Ugás, The Ring’s No. 3-rated welterweight, hosted media at the Salas Boxing Academy in Las Vegas along with his trainer Ismael Salas.

“I’m very thankful for everyone who has supported me. I’m extremely ready for this fight and to give the fans a great show on April 16. This has been a fantastic training camp and I can’t wait.

“I’m happy to be fighting in Spence’s backyard, because they have great fans down there in Texas. It just adds extra motivation.

“We’ve had a great training camp here in Las Vegas with Ismael Salas. We always make sure that the hard work pays off. We’re going to be bringing our best into the ring.

“I was out of the ring for a long time, but when I came back and gave Jamal James the first loss of his career (in 2016), I knew that I would be coming for big things. Everything changed for me that night and it’s all led up to this.

“The Pacquiao fight was a great night for me. After that fight my life changed in even more ways. But I’ve always kept myself humble. I showed everyone who the WBA champion was. I have my eye on continuing to make history.

“Being an underdog means nothing to me. I was the underdog against Pacquiao and now again against Spence. I’ve always been the underdog and it doesn’t faze me.

“It’s an honor to be in the ring with Errol Spence Jr. We’re fighting for three belts, but even more important is fighting for honor and respect.

“Fans can expect me to fight like a warrior. I’m going to take all of my hard work into the ring on April 16.”

“Training camp has been great. We’ve had a long camp and now we’re in the period where Ugás is starting to make the adjustments that he’ll need to be ready for what Spence brings.”

“I’m feeling good and I’m ready to go. This layoff was easier for me after the injury than the one after the accident because it was a lot less stress on my body. Mentally, I was also prepared for what I was going to go through. I had been back in training before camp started for this fight so I’m ready. 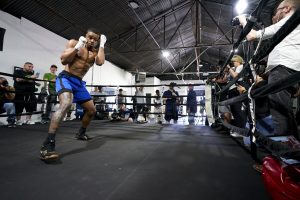 Spence shakes out for the media. Photo by Cooper Neill / Showtime

“Even half of me would beat most of these guys at the top level. I feel great now and I’m 100%. Physically, I’m on point and everything feels real regular. If Ugas’ trainer (Ismael Salas) thinks I’m a different fighter now, we’ll see in two and half weeks how different I am.

“Training camp has been great. I’ve had great sparring partners and we’ve been focused. I got a nutritionist and it’s made the weight cut much easier for me.

“I have everything in my arsenal. Whatever Ugas brings to the table, I’m ready for it. I’m going to dictate the pace and control everything. I’m making him fight my fight.

“From what I’ve seen, Ugas is very physical and very tough. He was waving Shawn Porter forward, so you know he has that fighter spirit inside of him.

“I’ve been putting in a lot of work and I’m not worried about my eye at all. It actually feels stronger than the other one. I’m just making sure that I’m 100% on point with everything.

“I’m not looking to say anything to the rest of the division. I’m going to send my message with my performance. When I have three belts, everyone is going to know what that means.

“I watched the Ugas vs. Manny Pacquiao fight live but I haven’t watched it since then. I thought the way that fight went was more because of Pacquiao being a shell of himself. 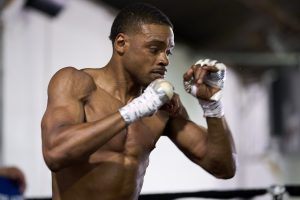 “I’ve been looking forward to this fight since I had to drop out of the Pacquiao bout. I knew I would be fighting the winner, and now I’ve got Ugas in front of me. He’s a tough champion who’s been through a lot in his life.

“I can’t sit back and fight a tune-up fight right now. I want to go straight in with the sharks. Ugas is going to push me to another level and that’s what I want. I knew that if I was fighting a tune-up I could sneak snacks in at night and stuff like that. I’m fighting someone on my level.

“Those Mexican fans are a huge part of Texas and I love fighting in front of them. I’m planning on giving them the kind of amazing fight they love.”