As the offseason continues its nonstop push toward the NFL draft and the 2022 football season, it is an excellent time to take a step back and assess the football landscape for dynasty football managers. What better place to begin than the curious case of Saquon Barkley.

It seems like just yesterday the explosive running back out of Penn State was selected second overall by the New York Giants thanks to his athleticism and three-down capabilities. Barkley rewarded fantasy managers that season by finishing as the RB1 in PPR leagues, scoring 385.8 fantasy points and averaging 24.1 PPR points per week. Since then, a series of injuries have capped Barkley’s upside, forcing him to miss 21 out of a possible 49 games. That leads us to where we are today.

Barkley heads into the 2022 season with plenty of factors that ultimately cloud his dynasty value. Are his recent injuries a cause for concern or just a series of unfortunate events? Have a series of injuries (including a high ankle sprain in 2019 and an ACL/MCL tear in 2020) sapped him of the explosiveness needed to recapture his spot near the top of dynasty running back rankings? How will a new coaching staff utilize him going forward? Will he even be a Giant after the 2022 season? Last but not least, what should dynasty managers do with a former running back with sky-high expectations?

Feature Promo: Get any full-season NFL Premium Pass for 50% off and win big in 2022. Exclusive access to our Draft Kit, premium articles, rankings and projections, 15 lineup tools and Premium DFS tools and cheat sheets.

As of this article, the dynasty community almost universally considers Saquon Barkley outside of the top-12 running backs in fantasy football, comfortably putting him anywhere from RB15 to RB20. Given his injury history and the influence of talent at the running back position in the last two draft classes, it is very easy to understand why.

Most top-12 rankings will include some combination of highly productive veterans like Christian McCaffrey (who has his own injury struggles but was still a fantasy force when healthy in 2021), Austin Ekeler, Joe Mixon, Dalvin Cook, and Derrick Henry, second- year backs who have shown they can handle the NFL (Jonathan Taylor, D’Andre Swift, and Antonio Gibson), and second-year backs like Najee Harris and Javonte Williams. It’s also fair to assume that superior college production and an explosive combine will elevate rookie Breece Hall above Barkley as well, assuming he gets a favorable landing spot.

The running back spot has become far more populated since we last saw a healthy season from Barkley. Unfortunately, the moments we saw Barkley in 2021 didn’t do much to assure fantasy managers that the fifth-year rusher was poised to regain his rookie year form. 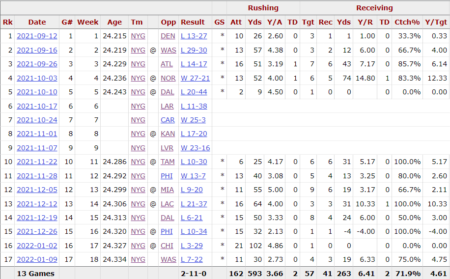 barkley understandably struggled out of the gate in 2021, which is typical for any player coming off a significant knee injury. In his first four games of the season, Barkley averaged just 13 carries for 46.5 yards per game but had his production buoyed by 4.8 targets, 3.5 receptions, and 32.5 receiving yards. Just as Barkley was finding a groove, he suffered an ugly-looking ankle injury that cost him four games. Barkley was able to come back from that injury and once again averaged just 13 carries and 4.6 targets per game as the Giants’ offense fell apart around him. The more concerning aspect of Barkley’s return in 2021 was not his struggles, but the fact that a journeyman running back was able to show more efficiency than him.

Both players played in an offense that featured a makeshift offensive line, a backup quarterback, and numerous injuries at the wide receiver position. Despite those conditions, Booker averaged more yards per carry, yards per reception, and was more efficient as a receiver. That is not good news for Barkley whether he is coming off an injury or not.

In the short-term, the Giants head into the 2022 season hoping for health more so than anything else. There were some offseason trade rumors regarding Saquon Barkley, but at the moment it seems like he will be remaining in New York.

The Giants’ biggest addition this offseason comes in the form of a new head coach, Brian Daboll, who brings along former Kansas City passing game coordinator Mike Kafka. New York added Mark Glowinski, PFF’s 21st ranked guard in 2021, to the offensive line and is armed with two top-10 picks. It seems highly likely that one of those picks is used to add an offensive tackle to pair with left tackle Andrew Thomas.

Daboll comes into his first head coaching opportunity with the reputation for developing quarterbacks and leading an explosive offense in Buffalo. If Daboll can help Daniel Jones take a step as a passer while maximizing the abilities of Kenny Golladay and Kadarius Toney, then Barkley could be poised for a big season working behind an improved offensive line and with a head coach that can maximize his talented players. If this happens, Barkley’s value will certainly raise a bit. His injury history and age of him will likely make it impossible for him to reclaim a place within the top-five of the dynasty running back landscape.

Beyond that, the long-term dynasty impact of Saquon Barkley is less clear. NFL teams are finding themselves more and more cautious when it comes to offering running backs long-term contracts. If Barkley becomes a free agent after this season, it will be interesting to see how the NFL views him. Few teams can offer worse conditions on offense than New York did in 2021, but a new head coach and a draft-day investment in the offensive line can change those prospects in a hurry.

Given the circumstances surrounding Barkley’s injury history, the youth at the running back position, and the new coaching staff, RB15 feels fair for Saquon Barkley at the outset of the 2022 season. So what should fantasy managers do with that information?

This is ultimately the most complicated factor when it comes to Saquon Barkley and will entirely depend on the league fantasy managers are in. Managers who already have Saquon Barkley on their roster will have a hard time selling low on him, hoping that a full offseason and new coaching staff will raise his value closer to 2019. While he will never truly recapture his peak value, there is a chance for him to fetch a solid offering if he starts hot in 2022.

Fantasy managers who are trying to get in early to avoid that spike should try offering a young running back with question marks (think JK Dobbins, Travis Etienne, Elijah Mitchell) and multiple second or third rounders to get the bidding started.

Recommendation: Holding if you have him. Worth buying if the price is right in a PPR league.

Like what you see? Download our updated fantasy football app for iPhone and Android with 24×7 player news, injury alerts, rankings, NFL rookies & more. All free!

Be sure to also check out all of our other daily fantasy football articles and analysis to help you set those winning lineups, including this new RotoBaller YouTube video: