Growing up in Moore, Nick Sanford was among those fascinated by Sasquatch stories.

“In junior high, cryptozoology interested me, and Bigfoot’s just got this mystique. Right now, for whatever reason, it’s like you throw a rock and you hit a car that’s got a Bigfoot bumper sticker on it. It’s just so a part of the zeitgeist. There’s something about the mythology that people keep perpetuating,” he said.

“It’s this weird little almost comforting thing that brings people together, a good Bigfoot joke. Everyone’s got this weird fascination with, you know, the ‘Hide-and-seek champion of the world.'”

The independent filmmaker is getting in on the joke with his latest micro-budget movie, a raunchy Bigfoot comedy titled “Elusive.” Filmed in central Oklahoma in fall 2020, the funny feature is premiering April 1 — no fooling, even though it’s April Fools’ Day — at Rodeo Cinema on Film Row for a weeklong run, followed by limited showings in Bartlesville and Tulsa.

“From the very beginning, before I even started writing the script, just talking with the other producers, there was always this feeling of, ‘OK, we’re doing a comedy about a guy trying to find Bigfoot for his son… “This is going to be dumb, and this is going to be stupid. But this is also going to be the “Forrest Gump” of Bigfoot comedies or whatever,'” Sanford said wryly.

“Life gets bleak and depressing the older you get, so you gotta hold on to something — and it winds up being the goat sucker and the Sasquatch.”

Although his most recent films have been the horror movies “The Harvesters” and “Tempus Fugit,” Sanford has created comedies before. “Elusive” actually started out as a short film he made around 2013.

“It wasn’t great, but there was something there. We always wished, ‘We should do something more with that.’ … In 2020, there was another movie that we were trying to get off the ground, looking for money for, and the pandemic hit. kind of throw money into and shoot this fall, shoot in a week, shoot it outside as safe as possible and as cheap as possible?'” he recalled in a phone interview along with his new film’s stars.

“Around that time, I hurt my back at work, I was off for two weeks and on pain pills. … So, that’s when I started writing the script.”

“You can’t tell at all that the script was written on pain pills,” quipped Alex Sanchez, an Oklahoma City comedian who stars in the feature version of “Elusive.”

Fellow local comic BradChad Porter plays Wayne, a self-proclaimed cryptozoologist who goes on a search for Bigfoot, accompanied Jimmy, a self-important aspiring filmmaker (Sanchez) who is documenting the quest. Cryptozoologists are involved in the study of animals that are rumored to exist.

Since the Sasquatch is his teenage son’s favorite creature of lore, Wayne is determined to find proof that the big ape-like beast is real. But their mission is complicated by encounters with several strange locals who claim to have come across Bigfoot themselves (including a gun-toting militant played by Oklahoma cult-favorite filmmaker Mickey Reece).

“I grew up in Sulphur, so I spent a lot of time in Ada, which is about 30 minutes away. … Maybe there was talk of a sighting there once in the ’80s or whatever, but there are a lot of Bigfoot hunters in Ada. So, I grew up listening to it a lot, and I feel like when I was young, I completely dismissed it out of hand,” said Porter, who recently moved back to Oklahoma after living for a couple of years in Arkansas.

“As I’ve gotten older, I’ve been more fascinated by cryptozoology. … Then, they actually did find a giant squid, and I was like, ‘Oh, well, hang on a second. I’ve been told my whole life this was a myth.’ If a giant squid can hide in the ocean — and now it turns out there’s a bunch of them — then a big hairy dude can hide in the woods.

“I had a lot of Nessie books as a kid. My parents were very involved in the church — my mom was a pastor — so I was doing like Nessie apologetics,” Sanchez said.

“Bigfoot never really held as much sway over me until I became an adult and I found out about Oklahoma’s Bigfoot festival … the Honobia Bigfoot Festival, which I think is fascinating. I think Bigfoot believing … has become a bigger deal lately , just as all of our public institutions fail. People sort of need something to grab on; there’s less and less that a person can trust. So, Bigfoot is maybe in the top 10 most trustworthy American public figures.”

Although the title is “Elusive,” the film is marketed online as “A Stupid Bigfoot Movie.”

“It’s really an exercise in managing expectations. We want people to know what they’re in for,” cracked Sanchez. 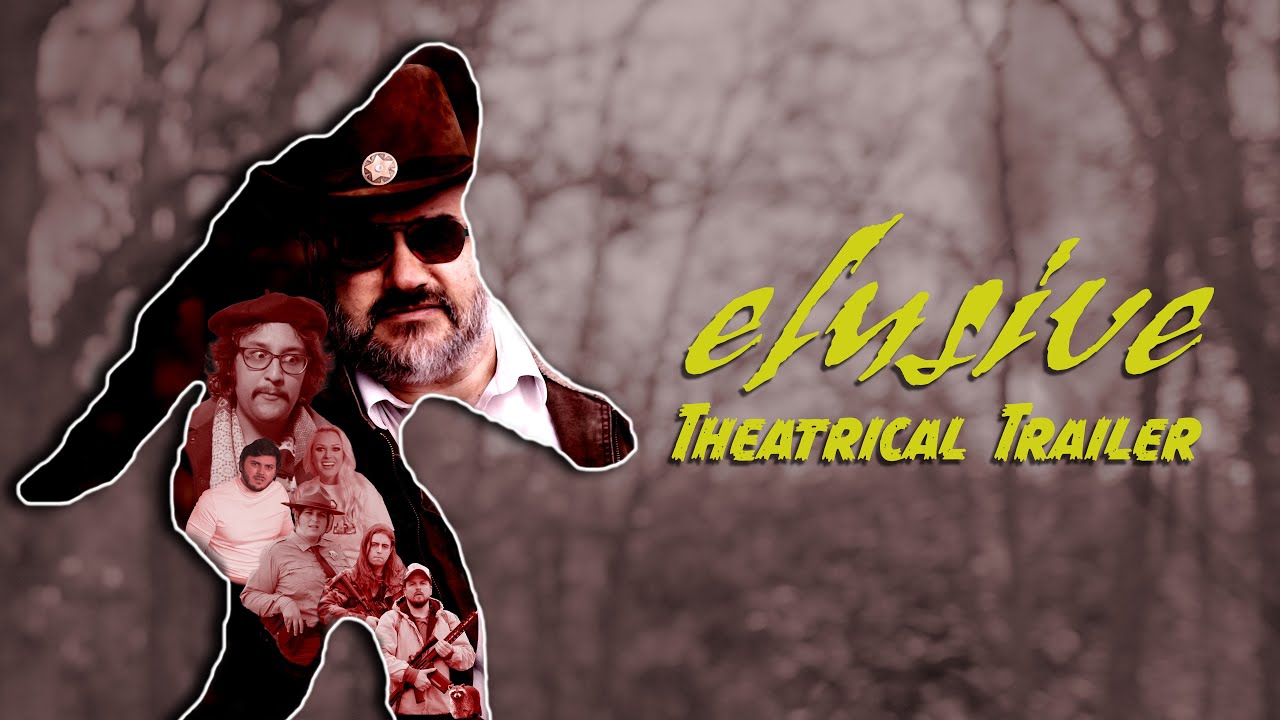 “Elusive” finds plenty of over-the-top humor in a kinky, drug-fueled Sasquatch storyline and a bevy of barely bleeped F-bombs. But the trailer also invites viewers to “Come for the Bigfoot jokes; stay for the father issues.”

“I had just become a father at the beginning of 2020, so part of it was kind of looking back on my own sort of childhood obsessions or youthful things and just questioning it: Why was I so into this when I was younger? And is there kind of a point where you stop believing in stuff like that or caring about stuff like that?” Sanford said.

Along with directing the comedy, Sanford co-wrote “Elusive” with the film’s editor, Andrew McDonald. It is produced by Steven Patchin and Bartlesville native Chris Butcher.

Making the movie during a global pandemic provided a particular challenge, Sanford said.

“We just felt grateful that we even got to do anything during one of the most bizarre times in human history. We did great with COVID protocols and keeping everyone safe and all that. But to me, I was just grateful that I was getting to make a movie at all,” Sanford said.

“It’s easy to forget what November of 2020 was like: I was just glad to be around humans,” Porter added. “I felt like I was doing dirty things every day just getting in my car and leaving the house. … Just driving to set, I was like, ‘Oh, I’m getting away with something, and nobody knows.'”

As it turned out, the cast and crew barely got away with making the movie because nobody knew that both leads were suffering from undiagnosed health issues.

“We shot this whole thing over the course of a week, week and a half, and the whole time my stomach was hurting so bad — and I had no idea why. I was rolling around between takes on the ground. I was having trouble eating, and I was just feeling really bad, really tired,” Sanchez said. “The day after we stopped filming, I stopped running on adrenaline, had to go to the hospital for a couple of days. It was there that we found out that I had Crohn’s disease — on my birthday.”

The following April, Porter was hospitalized in Arkansas and had to undergo emergency surgery after suffering a ruptured colon from untreated diverticulitis.

“We didn’t realize how much of a car crash we avoided until we were done with shooting. Then when we were looking back, we were like, ‘I can’t believe we did any of that.’ It’s like we were doing a drag race blindfolded,” Sanford said. “I guess we’ll find out Friday how much we got away with.”

The world-premiere screening of “Elusive” at 7:30 pm April 1 at Rodeo Cinema on Film Row is sold out, but an encore showing is set for 9:30 pm Additional screenings are booked through April 7 at the nonprofit arthouse theater.

The movie will play at 3:30 and 7:30 pm April 16 at the Bartlesville Community Center, and its Tulsa run is slated for April 29-May 5 at Circle Cinema.

Starting April 1, “Elusive” will be available to stream at StupidBigfootMovie.com for a $4.69 rental.

“All we want to do is make people laugh for an hour and a half and let them forget about all the craziness for a second. That’s what we view as our job,” Sanford said.

HOW TO SEE ‘ELUSIVE’