Author Clay McLeod Chapman’s 2019 breakthrough novel, The Remakingsaw him tackle an urban legend from inception through multiple retellings and interpretations.

With his latest, Whisper Down the Lane—out this week in trade paperback from Quirk Books—Chapman takes on the horror of the ’80s Satanic Panic.

Inspired by the McMartin preschool trial and a slew of real-life events, the story of art teacher Richard, his youth as a boy named Sean, and how the past can catch up with you is all the more terrifying knowing that something very similar did happen.

It’s a superb and engaging read, so we were happy to speak with Clay McLeod Chapman via email about his horror novels, work in the comics industry, and the nature of fact vs. fiction. 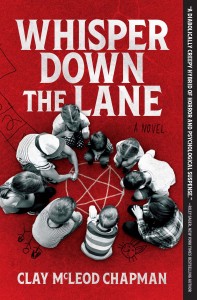 The Pitch: Both The Remaking and Whisper Down the Lane take inspiration from real world tales. How do you honor the truth of these stories while also crafting an intriguing story of your own?

Clay McLeod Chapman: One of the concepts I wanted to explore with The Remaking was the idea of ​​storytelling as a form of appropriation. I wanted to ask both the reader and myself, “Who has the right to tell someone else’s story?”

What happens when another person’s tragedy is taken away from them and becomes the stuff of urban legend? pop culture? I’m implicating myself in that as well. No one’s hands are clean in The Remakingmine most of all.

With Whisper Down the Lane, I had some skin in the game. I was a child reared through the ’70s and ’80s, whose suburban psychology was kissed with those white vans with no windows, and stranger danger, and satanic graffiti spray-painted across the walls of the local pool.

Me and my neighborhood pals were taught to be afraid of this unknown presence—strangers who wanted to kidnap us—invisible but always palpable, until it was inevitable that a wee bit of that paranoia integrated itself into our daily play.

Now I’m a father, and I’m absolutely terrified of everything, which puts me on the flipside of the paranoia-coin. The world becomes a truly frightening place when you send your own children out into it. Now I’m on the prowl for that white van.

It made writing Whisper Down the Lane a relatively effortless endeavor, because I got to tap into what terrified me as both a child in the thick of the ’80s Satanic Panic, then as a parent slogging through the aughts, timing it perfectly with our most recent round of Satanic Panicking.

Which is just to say I’m writing about myself, I guess. That’s how I honor these stories. I look for an entry point that feels truthful to me and what I’m afraid of, writing from there.

The nature of what, exactly, truth is factors into the plot of both books as well. By examining things from different perspectives, do you feel that you’re commenting on something more than just a scary story?

Storytelling has always been important to me. I grew up around a campfire. Spinning yarns has integrated itself into my existence. But one of the things I love most about storytelling is that it is a subjective experience.

Who our narrator is, matters. They are, in effect, apart from the story. Particularly when it comes to first-person narratives, which I absolutely adore. I bow down at the altar of Poe.

Sometimes our narrators aren’t necessarily the best people to tell these particular stories, but the reader is trapped in their point of view. That subjectivity can make for a claustrophobic experience, but that’s what I love about them so much.

The reader is stuck with an unreliable narrator and at some point they have to ask themselves, “Do I trust the person telling me this story? Why should we take it on good faith that they’re telling us the truth? Just why?

Or, alternately—is the fact that the truth can’t be known something terrifying in and of itself?

This is a little silly, but a few years back, I had some friends in a band. I was hanging out with them while they were getting interviewed for something or other… The question about the origins of their group came up and I was throttled by their answer.

It was a completely different version of what I’d come to understand as the truth. It was streamlined in such a way that it felt—to me, at least—like a whitewashed version of their origin story. I wanted to pipe up and shout, “That’s not how it happened!“

My sense of self-righteous indignation was so utterly annoying, because the fact of the matter is the truth wasn’t as interesting. It was boring. Plus, it simply wasn’t my story to tell.

It threw me for such a loop, because it dawned on me how we’re all out here, just telling versions of our own histories, our own truths, even if that’s not objectively The Truth. So whenever I’m in an interview, I struggle to speak from my own truth–whatever that is.

What I find frightening—and what I try to tackle in the stories I write—is that we’re hamstrung by our own personal points of view, we’re hobbled by the blinders of our subjectivity, not to mention our own personal experiences, our traumas… and somehow that all effects the way in which we spin out our own yarns.

TI have storyteller is the story. And we’re all liars! I’m a liar. It’s impossible not to be on some level.

So, what happens when these lies we tell become truth? What happens when someone else, a reader—or in the case of something like the Satanic Panic, a believer—takes our untruths and holds them to be real? Our lies become somebody else’s beliefs, and that’s when we get Pizzagate. We get the McMartin School Trials.

What’s the appeal of telling stories that jump around in time?

Again, it goes back to the age-old art of storytelling. Particularly the oral tradition. Stories are messy. They are never linear. If I were to spin you a yarn about this big fish I caught today, I’d jump back-and-forth in time, jumbling up the sequence of things, trying to add details that happened earlier that affect the punchline.

I love novels that do that. The raw, messy books that feel organic in the way they unfold.

With The Remaking, it was all about the symmetry of its sequencing. The book unfolds in four sections, and each section is a rippled response of the previous section. If there’s ever a sequel—ha, just imagine that—there would be four more sections. Twelve! It just goes on and on, every twenty years.

As long as people tell stories and technology continues to evolve, there will be more remakings spun out from the little witch girl of Pilot’s Creek.

With Whisper Down the Lane, I wanted the past and the present to constantly be responding to each other. I wrote it like I was playing tennis. Like the past was challenging the present to a game of ping pong… and I think the past won. We can never run away from our past. Not forever at least. Richard tried, but…yeah. 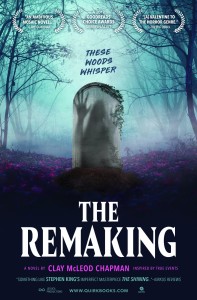 How do you research these stories? One has to imagine there’s a lot of material to sift through when contending with the Satanic Panic or ’70s drive-in fodder.

Well, first off, for the ’70s drive-in fodder…I’m a fan. Those horror films were my blankie as a boy. Even now. While working on The RemakingI simply closed my eyes and wrote about the movies and books that I read and loved.

With the Satanic Panic, I did my damnedest to speak the (subjective) truth of the era. There were so many amazing books written about the subject, We Believe the Children by Richard Beck, in particular.

An interesting thing happened after Whisper Down the Lane came out in hardback. A handful of readers responded by saying, “That never happened,” or, “I was a kid back then, and our church never burned Cabbage Patch Dolls.”

What I learned is that the Satanic Panic period—in the ’80s, at least—was such a personally subjective experience for so many different people; that my panic might be different from your own personal panic. A few readers reacted harshly to the book, almost denying the researched parts, because it was different from their own memories of what happened.

So, again, It always goes back to the narrator. Who gets to tell these stories? What is our subjective experience?

When your work is adapted for the screen—as in TheBoy or Haunted, Horrifying Sounds from Beyond the Grave—how do you react to seeing it transformed?

I’m completely fascinated by the alchemy between books and film. I love the adaptation process, warts and all. Stories are so fluid these days, for better or for worse. You might watch a movie and realize it’s based on a book, which leads you to the novel. The source material for TheBoy is out there for those who wish to find it. God bless ’em.

Along the same lines, what’s it like adapting established characters for your work with Marvel Comics with characters like Carnage or Deadpool?

I always chalk it up to playing in the sandbox with somebody else’s toys. You ask if you can borrow them for a while and just hope you don’t break them. If you keep them in good enough condition, who knows? Maybe they’ll let you play with them again.

Even your comic book work skews towards the dark. Where’d you discover your love for the macabre side of genre fiction?

It’s an odd can of worms to crack open, but… I was a weird kid, you know? I had one of those weird Blue Velvet-childhoods where the surface was a pastel dream, but there were things squirming underneath that only broke through when I found my love for writing.

I got through my personal traumas through watching horror movies and reading spooky books, which eventually led to the discovery that I had my own stories to tell.

I’ve been fortunate to find a small handful of readers who want to go on this journey with me and, honestly, there’s nothing like it. Hopefully we get the catharsis we’re all looking for, either as readers or storytellers. Oh both. We’ve all got a story to share, right?

Clay McLeod Chapman’s Whisper Down the Lane is out in trade paperback on April 5 from Quirk Books.