Growing up in Sokoto, northwest Nigeria, Uchenna Emelife would often find himself gesturing with excitement as he passionately discussed a new book he read, or compared characters of novels that shaped his youth. From a young age, the 22-year-old developed the hobby of reading books — a hobby considered a rare one where he’s from.

The books he devoured were authored mostly by Western writers. The literature I have avoided, though, was that of Africa. He had a skewed opinion of it: one shaped by the common cliché stories of racism, colonialism and corruption of postcolonial works. But now, he’s the co-founder of a book club that has taken upon itself to promote reading African literature in a country with reportedly one of the world’s lowest reading rates.

Africa’s most populous country has been witnessing a decline in reading culture, attributed to poverty, unemployment and more, raising the concerns of officials and academics alike. According to a 2020 study involving 1000 Nigerian students, nearly 18% of the respondents indicated they have not read books outside their academic or career pursuit; over half the total respondents admitted to having read between 1-3 books in the past one year; a mere 1.9% of youths claimed to have read at least 14 books within the same 12-month period.

The relationship with novels is even worse in the north, where a conservative society regards reading as a waste of time and resources. According to Aisha Omara lecturer in the department of European Languages ​​in Federal University Birnin Kebbi, northern Nigeria’s dire reading culture is “a result of the poor standard of education in the region, and also due to most public schools not offering literature as a subject in primary and secondary schools.”

“The students therefore miss out on the opportunity to be compelled to read and eventually develop a reading culture,” she says.

This prompted Emelife, a student of literature at Sokoto’s Usmanu Danfodiyo University, to create a book club in his home state with the aim of turning this around, especially in the wake of his own newfound appreciation for African literature.

“At first, I believed Africans cannot write, found their stories boring, mostly political,” he told OkayAfrica. “When they are not talking about racism, colonialism and the aftermath of colonialism, they straddle corruption; the same thing over and over again,” he says.

But in 2015, Emelife was swept off her feet after reading Chimamanda Ngozi Adichie‘s Purple Hibiscus. “It was different from what I used to read. One thing that stood out for me was familiarity, especially because of the settings of the story. These are Igbo people. These are Catholics. I’m Igbo. I’m Catholic. Kambilli’s father has so much resemblance to my father,” he says. This sense of familiarity sparked his love for African literature.

Since then, he has longed for a community of literary enthusiasts with whom he can share his new passion. But it was not until late April 2020, with schools shutting down to stifle the spread of COVID-19 in the country, that Emelife and his literature-loving friend Rodiyah Mikaila student of law in the same university, went live with “Book O’clock,” via a Whatsapp group, to inspire an appreciation for African literature among the young and old.

“When the pandemic came along, and then everyone had to leave school, we figured that there was no better time for some sense of community than now, when COVID had taken away that feeling of togetherness,” Emelife says.

For Mikail, she hopes the book club erases the stereotypes associated with reading in the north – that it’s for nerds, for the privileged, or arts students. “Reading should not be limited to a few people. It’s for everyone. It helps one to think better and widen the mind. It makes one more tolerant of others. It’s just a thing that everybody should do,” she says.

As for why the book club focuses on African literature, Emelife believes that, aside from contemporary African fiction being so diverse and rich, “if we had grown up watching African cartoons, reading African books, we wouldn’t be so hung up on the West as a generation.”

At first, the book club began with virtual discussions of books, and in December 2020 they started organizing monthly reads of African books, attended virtually by well-acclaimed African writers like Ukamaka Olisakweauthor of Ogadinma, Oyinkan Braithwaiteauthor of My Sister, the Serial Killer and Cheluchi Onyemelukwe-Onuobiaauthor of Son of the House and winner of the 2021 Nigerian Prize for Literature.

Through the club’s online store of mostly second-hand books, literature enthusiasts can access copies of The Secret Lives of Baba Segi’s Wives, In Every Mirror She’s Black, Dreams and Assorted Nightmares and other contemporary African works that once required a long trip to faraway Lagos or Ibadan to obtain.

Working alongside like-minded platforms, the self-funded club also organized a first-of-its-kind book and art festival in Sokoto, in July last year, which drew around 700 attendees.

According to Umar, initiatives like Book O’clock “are pertinent to tackling the endemic poor reading culture in Nigeria’s north”. In order to make literature more attractive, she says, “more literary clubs have to emerge to help make learning and reading fun, reaching out to a larger audience and arousing people’s interest in reading.”

Through visiting secondary schools across Sokoto, members of Book O’clock hope to kindle youngsters’ passion for reading. Between April and July 2021, they visited nine schools, giving a book to each of the 500 students they spoke with. Since then, they’ve established a book club in one of those schools, and work is underway to establish others to bring together literature enthusiasts, old and new, in each school. 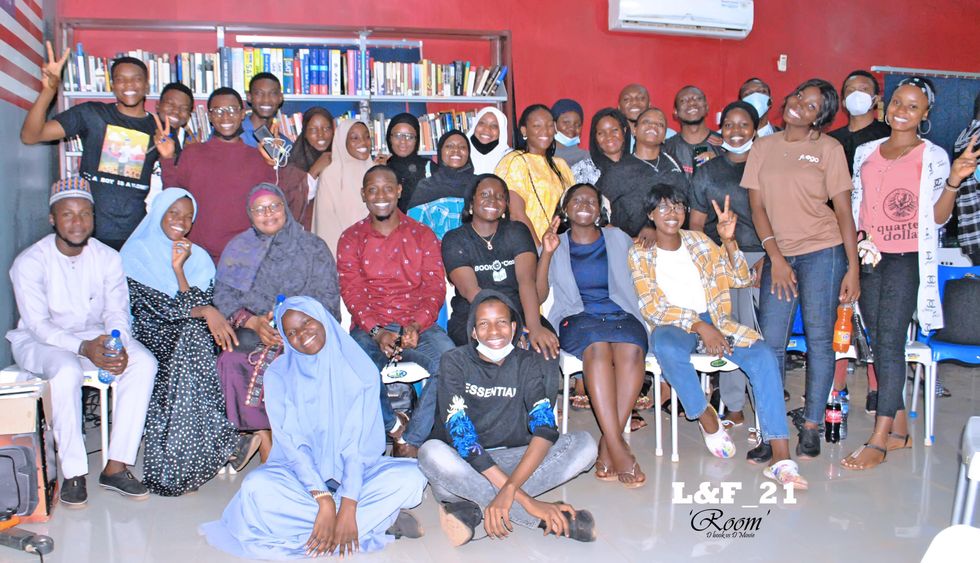 Nesca Moses, 16, a student in Global Kids Academy, says the club’s visit to her school increased her love for African books: “I actually love African authors and literature, but after meeting [members of Book O’clock] I had more joy to read. More students in my school now want to know more about African authors.”

Abdulrahman Ibrahim, 23, an English language student at Usmanu Danfodiyo University credits the book club with helping him change his reading habits. “Before I joined the club, I found it difficult to read for longer periods. But after joining the club I dedicate myself to reading more texts recommended in the club. I now find joy in reading because it’s like a challenge. We read one or two texts monthly. And I take part in the discussion, too,” he says.

Since its launch, the book club has grown from 70 devoted members to 125, along with those who drop in from time to time.

According to Emelife, the pandemic and school life obligations of the students who run the book club have both been key impediments – the latter preventing physical meetings, and the former limiting such events. “Book O’clock is run by students and it’s very difficult to do all of what we have in mind when there is school to attend. So sometimes, we go weeks, even months, without literary activities because there is no time for it, Emelife says. However, he is hopeful that forging ahead with more events on the ground will draw more and more enthusiasts.

But another challenge has been lack of resources. Completely self-funded, co-founder Rodiyah said that many ideas, including gifts of books to school students, have had to be suspended due to unavailable money. “The book club is wholly financed with donations from members who are largely students. We have lots of ideas really, and as with every start-up, funding is something that is challenging. We’ll come up with an idea, but we’ go to shelve it because there is no funding.”

Mockery and ridicule has also been a challenge in a culture that belittles reading. Emelife recalls how he was once mocked, on air, by the presenter of a radio show to which he was invited to speak about his initiative. “These little comments are kind of affecting. It’s kind of discouraging,” he says.

However, Book O’clock’s team is determined to push through. Rodiyah forecasts the book club to grow into “a big literary platform that has spread its reach across the nooks and crannies of the country; a well-structured literary platform that is publishing, that has presence in different schools across northern Nigeria and even Nigeria”. For Rodiyah and Emelife, along with the voracious readers they’re cultivating, it’s about much more than just getting together to chat books.

This story was written in collaboration with egab.

From Your Site Articles

Related Articles Around the Web