Josephine Ensign was on her way to provide basic health care to homeless people about 10 years ago, walking down Yesler Way, when the idea for “Skid Road” hit her.

Harborview Hospital was up on the hill behind her as she strode down Seattle’s oldest street, where the city’s earliest white settlers rolled rough cuts toward the shore. She was going to Seattle’s oldest neighborhood — a place with a high concentration of homeless service providers — to serve one of the nation’s largest homeless populations alongside students from the University of Washington.

“And how can Seattle, as such a progressive place and such a wealthy place by then, how can this be?” she thought.

She wanted to know more about how her adopted home got here, how our homelessness crisis reached this state of emergency, the history behind Harborview and our social services. The walk downhill along Skid Road, from an esteemed medical establishment to the city’s poorest, helped her figure out where to start.

In Ensign’s third book, “Skid Road: On the Frontier of Health and Homelessness in an American City,” she reveals that since the first reported homeless man was found on the shores of Elliott Bay more than 160 years ago — his feet wrapped in rags — Seattle’s white settlers have grappled with the same questions around homelessness ever since: Whose responsibility is it to take care of our poorest? How do we pay for it? And where do they live?

She tracks Seattle and King County’s history of homelessness and health care from the mid-1800s, even before Washington gained statehood, to the present day, revealing that we’ve largely tested the same methods and strategies over and over again when it comes to aiding our city’s most vulnerable. 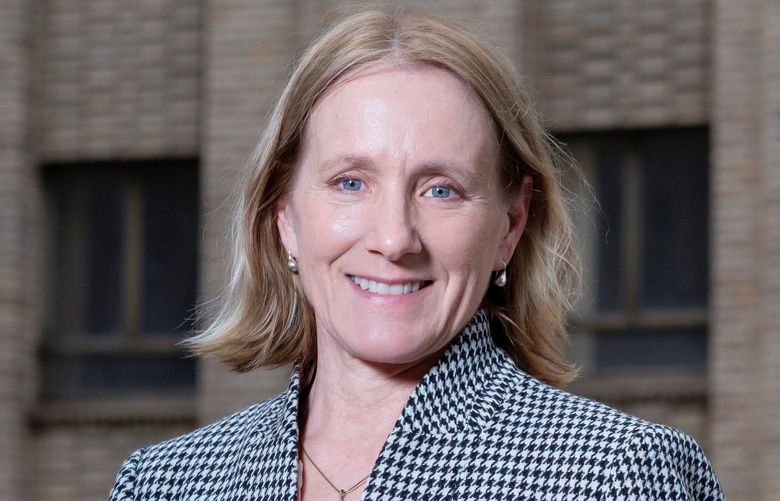 Q&A on Seattle’s history of homelessness

Join The Seattle Times for a virtual discussion with local author Josephine Ensign about her recent book, “Skid Road,” which explores Seattle’s history of homelessness and healthcare at 6:30 p.m. Thursday, April 14. Register now.

Her narrative history, published in 2021, centers the stories of people who haven’t always been given a prominent place or more than a mention in previous historical records, like Edward Moore.

In Murray Morgan’s iconic “Skid Road: An Informal Portrait of Seattle” — one of the first books Ensign bought in the ’90s to get to know her new city — he mentions Edward Moore, the first reported “insane pauper” — a widely used term for poor people experiencing mental health issues at the time of white settlement — Ensign said. Other historians, too, made him a side note in publication.

But in Ensign’s “Skid Road,” he’s a main character.

Moore was found in a makeshift tent in 1854, a sailor at the age of 32. He’d been living off raw shellfish he foraged and was looked after by the Coast Salish people. It’s not entirely clear how Moore got there, but it does seem like he was part of a shipwrecked crew, Ensign said.

When white settlers first found Moore, they carried him to the town’s one rooming house. He was deemed unable to take care of himself. For the next year and a half, he was cared for and contemplated by local leaders.

In 1856, King County bid out the care of Moore, like how modern-day government agencies seek proposals from nonprofits to provide social services. But whether due to the bids being too high or not sufficient, leaders decided to gather private donations to place Moore on a ship and send him back to live with family in Massachusetts, similar to contemporary programs that offer homeless people a one-way bus ticket to family.

“What became of Moore, how the residents and leaders of the nascent town of Seattle dealt with him, and the poignant story of his final days echo lessons and dilemmas that are with us still,” Ensign writes in the book’s first chapter.

“It’s how we got here,” she said in a recent conversation.

Sitting outside of a coffee shop in Seattle’s University District, Ensign points to a pile of rubble across the alleyway.

“Do you know what this used to be?” she asks.

The sunken large piece of land — with temporary fencing boxing it in and colorful graffiti painted on bases of concrete — used to be home to the University Temple United Methodist Church.

The church held a young adult homeless shelter, ROOTS, in its basement for more than 20 years, offering 45 overnight beds for people ages 18 through 25.

Since the church was demolished last year, the shelter has had to find a new home, Ensign explained. Like so many sections of Seattle, it’s part of recent redevelopment in the neighborhood, but Ensign says there’s more to this story.

Ensign is a nurse practitioner and a professor of nursing at the University of Washington. She’s been providing care to homeless youth and adults for more than 30 years with much of that time spent in Seattle.

She’s also an unofficial historian in a rapidly evolving place, writing about a history that has been largely overlooked.

Years before that, when she was leading a homelessness project at the University of Washington, she was privy to some redevelopment plans for the University District.

Within the plans, the alleyway where she sat on that windy March morning, outside Cafe Allegro, and that torn-down Methodist church were both targeted as places to redevelop, Ensign said.

“It was basically sanitizing the U District,” she added. “It was really about, ‘How do we get rid of the homeless people and the drug users under the name of safety.’ “

Like the tearing down of the Methodist church, Ensign’s “Skid Road” shows that for more than 100 years, poor people living in Seattle have found ways to create shelter and community largely despite the odds.

Around the turn of the 20th century, shantytowns dotted Elliott Bay and into what is now Belltown. They looked eerily like modern-day tiny house villages, Ensign writes. They housed immigrants, migrant workers, urban Indigenous people, families who couldn’t afford other housing — people who were discriminated against in housing because of their race or ethnicity.

Thirty years later, a prominent shack town, one of a few Hoovervilles, held up to 1,500 people south of what is now Pioneer Square next to the town’s main garbage dump. The residents didn’t own the land, but they built a community with their own volunteer fire department, street signs and a post office.

“There were a lot of pushback from city and homeowners and business people that it was unsafe,” Ensign said of the Hoovervilles. Eventually, people were forced out and the largest Hooverville was burned to the ground in 1941.

“That again has echoes of what we’re going through today where people [living in an encampment] say, ‘I don’t want to go to this thing because I have my people, I have my community,’ ” she said.

Much of early Washington’s methods for handling the care of poor and mentally ill residents stemmed from English Poor Laws dating back to 1494. Ensign traveled to Edinburgh, Scotland and London to research those laws on a Fulbright scholarship starting in 2018.

These laws established that family members were primarily responsible for the care of a poor person, stretching three generations. But if the family didn’t exist or was unable to help, then the local parish could publicly auction the care of the pauper, or poor person. “A thinly veiled version of slavery,” Ensign writes in her book by her.

This created the differentiation between able-bodied poor people versus those unable to work, and that division has carried on even to our health care and social welfare systems today, Ensign explains.

For example, before President Barack Obama’s Affordable Care Act, Medicaid served many more women and children, Ensign explained, and left out large numbers of men — categorizing poor people to determine who was “deserving” of support and who was not, just like the English Poor Laws.

Ensign knows firsthand what it’s like to be homeless. She’s gotten more open to sharing that part of her past de ella after earning full tenure at the University of Washington.

“Homelessness is stigmatizing,” she said. “And that gets internalized.”

It’s altered her life trajectory, she said, and changed her views on the issue and our health care safety net.

In her book, she doesn’t assign solutions, nor does she get too far into the weeds of our contemporary homelessness system’s successes or failures or how the pandemic has reshaped that work.

That’s coming in her next book, she said.