HELLO FOLKS! Welcome to Comic Watch’s Kickstarter Korner. A weekly look at Kickstarter campaigns that you may want to put some eyes on. We hope you find something you enjoy and back these great campaigns and creators!

The Castle in the Sea by Anil Serpin

A long graphic novel about an island full of natural wonders, the people and creatures who inhabit it, and their struggle for harmony.

Two Gems—one Red and one Blue. They contain the power of the Guardian Dragon, who grants it to the people of Crescent Island when they need to protect their home from outside threats. The bearer of the Red Gem is granted incredible destructive power, as well as near-immortality. The bearer of the Blue Gem gains protection from, and the ability to kill, the Red Gembearer. No one person can handle the power of both Gems at once; they would be overwhelmed and destroyed. This power is granted with the promise of its return to the Guardian once the island is safe. With the power of these Gems, two groups of natives; the Woodfolk and the Seafolk of Crescent Island, have defended their home for generations. They have always coexisted peacefully, living in their separate territories, coming together only when there is a threat to the island. When this happens, one Gembearer is selected from each group — the Red Gembearer defending the island, and the Blue Gembearer ensuring the return of the Gems to their rightful place once the island is safe again. This is meant to prevent any abuse of the Red Gem’s power. Meant to… 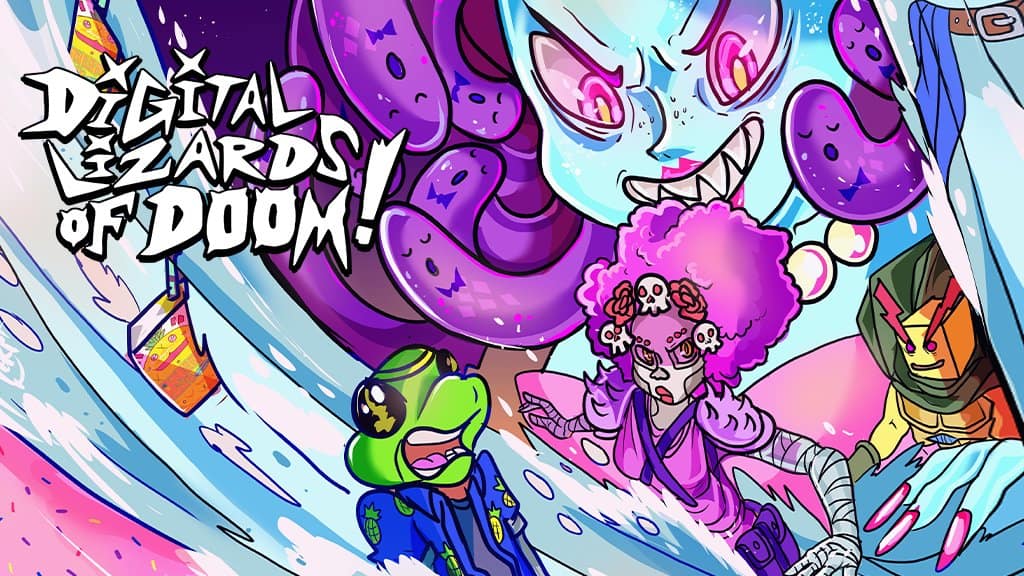 The third graphic novel adventure in the DLoD series!

Digital Lizards of Doom is a love letter to pop culture! It’s a multimedia experience for all ages, expressed through graphic novelization and music! In this world of sorcery and science, an evil robot (Commander EKO) and an ancient witch (Warty Morda) attack the peaceful kingdom of Kragladon. It’s up to the hero (Dizzy Doom) to retrieve a fabled weapon to bring peace back to not only Kragladon, BUT THE UNIVERSE! Follow the adventure inspired by action movies, Japanese storytelling, video games, and more. Oh, and there’s a cyborg pirate cat! 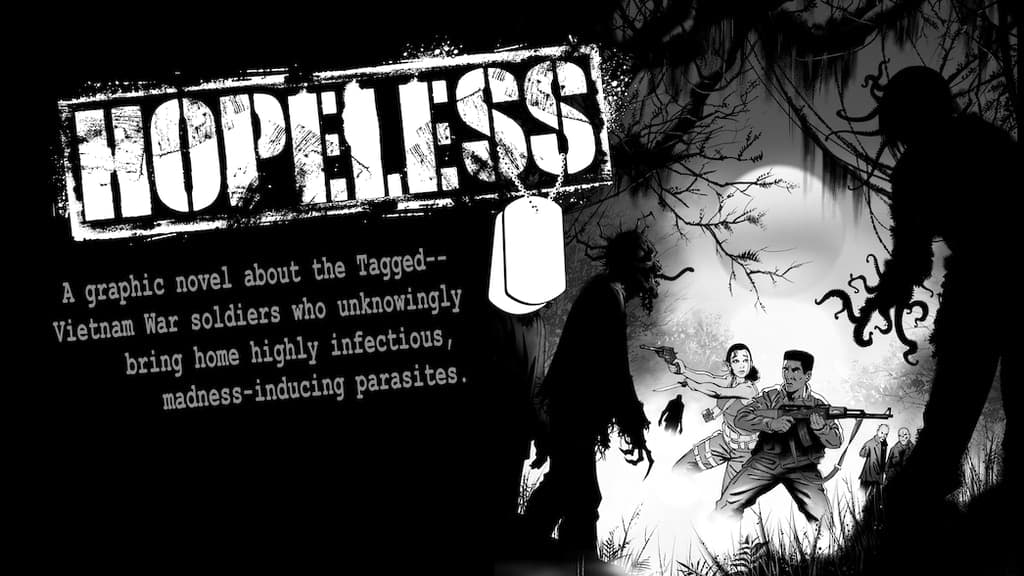 Hopeless is a 100-page graphic novel that begins on Chrisler Street, a dead end street in the fictional town of Hope, New York, enduring the turmoil of the late ’60s. Set during the Vietnam war, Hope, like thousands of small towns across America, has been gutted by the draft, the horrors of Vietnam, and the ongoing battle for civil rights. Now that landscape will be invaded by one final, horrific twist: the Tagged. Who are the Tagged? Those unfortunate souls infected by vicious parasites during their time deep in the jungles of Vietnam. These parasite-infected soldiers are about to unknowingly unleash a new type of hell on their hometowns. Slowly driven mad, their minds ravaged by mind-destroying parasites, these Tagged soldiers will viciously tear their communities apart.

Ninecrow: A Graphic Novel of Homegrown Horror by Dora Mitchell 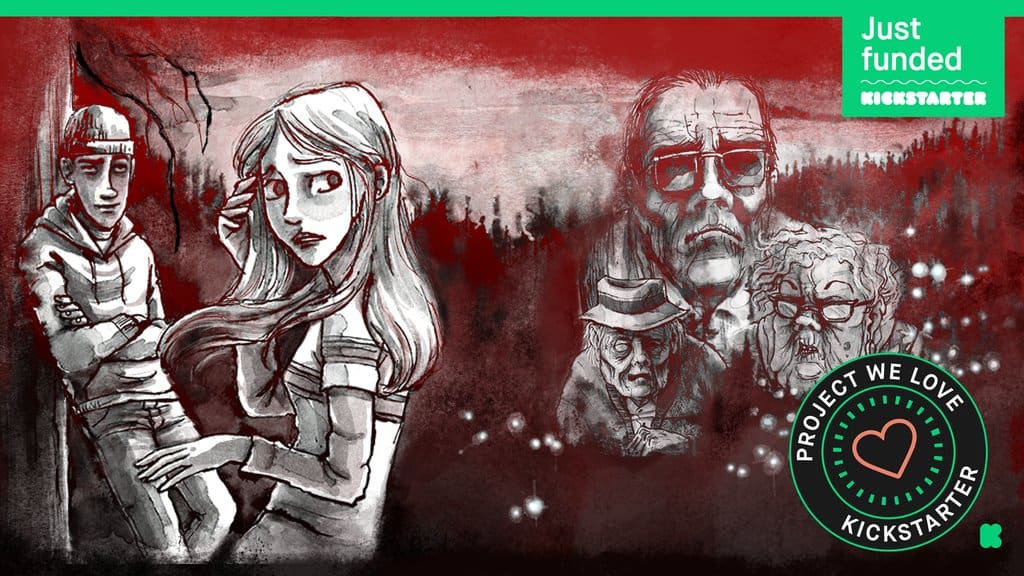 It’s the kind of town that just calls some people. If you hear it…you’ll never want to leave.

Tell me, child… Have you seen the bones beneath the flesh? Welcome to Black Valley. It’s a small town that welcomes newcomers, like 15-year-old Amanda Adams and her mom de ella… but only if they don’t ask too many questions. Don’t ask why strange lights appear in the woods above town some nights. Don’t wonder why so many residents of the town seem to be missing fingers and eyes and limbs. Don’t look too deeply into why teenagers go missing. Can Amanda free herself, her mother, and her friends from her from the strange influence of Black Valley… before she’s seen the bones beneath the flesh? 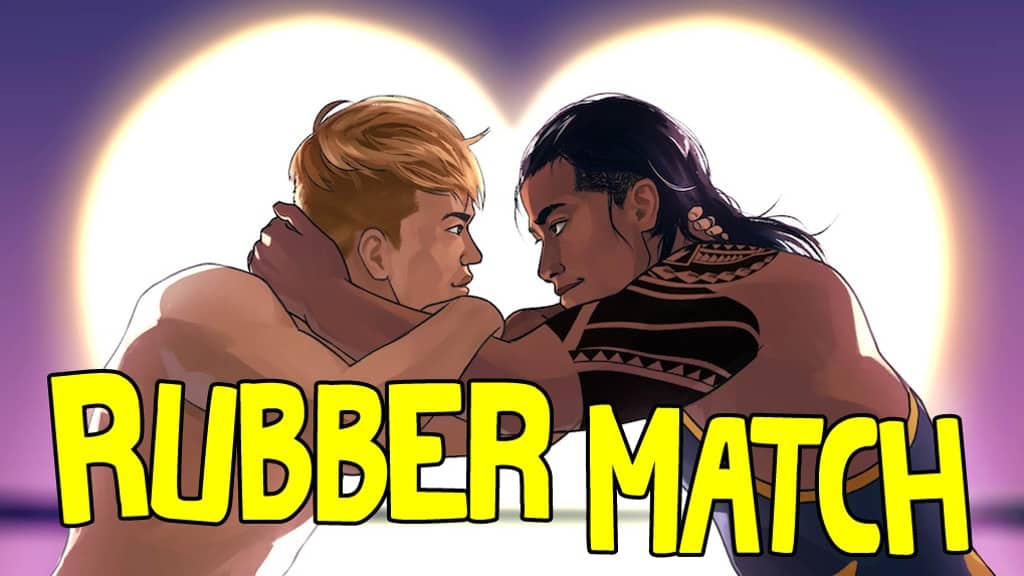 A one-shot comic about rivals turned partners turned ??? in the squared circle.

Scorpion Butch is the powerhouse heavyweight champion with big muscles and a soft heart. Ty Curry is the confident high-flying cruiserweight with hearts in his eyes for Scorpion alone. Together, they are the SPICY BOYS. The Spicy Boys have had a complicated relationship that has led them from an intense rivalry to championship gold. But masked rudo Blue Devil, whose shared past with Scorpion has made him jealous of his new friendship with Ty, is out to tear them apart in whatever way he can—even if it means hurting them in the process. 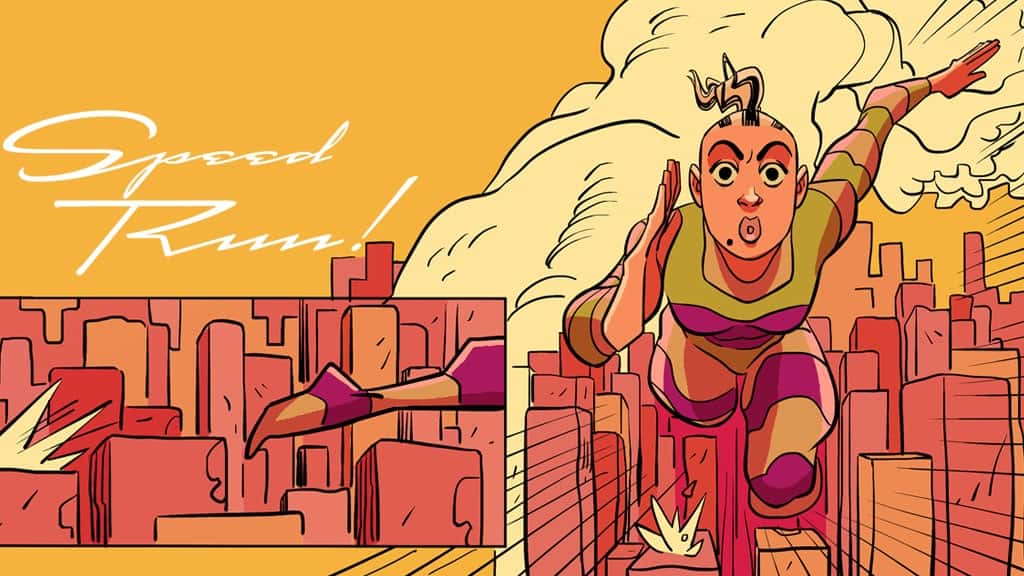 In this world, you have to run fast… or it will catch you. Don’t trip, don’t stop, and don’t look back. The slowest dies.

On a tiny planet, far away… Two teams from Earth, a bunch of scientists, and a group of adventurers, have established two bases. Their mission: to exploit the planet and its unique elements. What they didn’t know when they arrived, but what keeps them trapped there now, is that this world orbits a pulsar whose radiation produces some very strange effects. And in the summertime, those effects are heightened to extraordinary degrees! The only way to move between the tw bases is as fast as possible. Vehicles won’t work, engines fail in the ever-changing conditions, so running as fast as possible, leaping high and sliding and skidding across the surface, is the only way. And what a surface! Constantly shifting and throwing up new challenges all the time. It’s so traumatic, they have to be sedated so they don’t lose their minds at the kaleidoscope of terrains and creatures they’ll rush through. But what happens if they stop running? Then IT will catch up to them? What is IT? The most unstoppable force in the universe. And it will change everything. 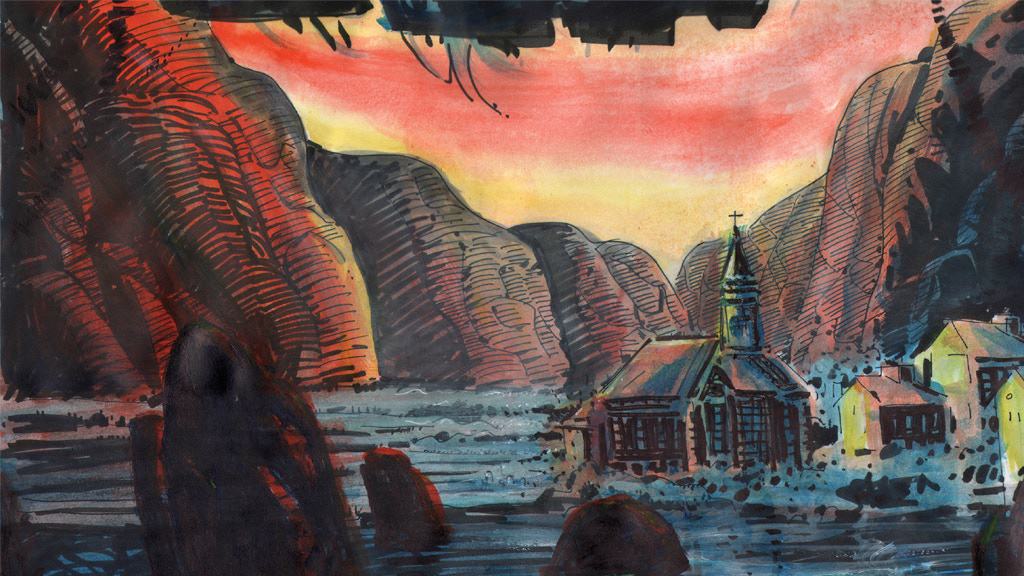 A collection of new comics and illustrations, with some obscure stuff.

Stuff – A Bit More is all about comics. I first discovered comic books in Chelmsford and Maldon, Southend, Ilford, and other towns in Essex. Stuff – A Bit More is my homage to those times, when I started reading Pow! and Wham! and Mighty World of Marvel in the 1970s and then stumbled across more Marvel and DC comics; Warren magazines; Star*Reach; HeavyMetal; Mad, Atlas and Charlton Comics.

I remember stealing my older brother’s copy of a Punisher comic and it was all down hill from there. I went to a Navy recruiter’s office with the promise of cake. I was lied to and 20 years later here I am. I enjoy summers off with my family at our timeshare on Gallifrey.