As anyone who has attempted it can tell you, organizing poets can be like trying to herd cats. They wander off; they follow their whims; they get distracted by the beauty of that one water droplet on the dented garbage can and the way it contrasts with the empty water bottle balanced aspirationally atop the lid in the hopes that someone will recycle instead of toss it.

So it’s no surprise that a couple of the region’s deftest hands at organizing poets are behind an event where wandering and distraction are part of the point.

Iowa City Poetry al Fresco was launched in 2021 by poet David Duer, a former English teacher at Washington High School in Cedar Rapids, who for years advised their award-winning Washington Literary Press and produced the PAM Slam showcase. Duer sits on the advisory board of Iowa City Poetry, an organization founded by poet Lisa Roberts, an educator, advocate and performer who is herself uniquely adept at harnessing poetic energy.

“In the fall of 2020, Lisa had challenged [the advisory board] to come up with programming ideas,” Duer said in an email. “As was true of all of us, I was missing that sense of artistic community that Iowa City has always been so good at providing. Inspired by two other successful local events — the Mission Creek Lit Crawls and the Longfellow Neighborhood Front Porch Concerts — I proposed a series of short, outdoor, socially distanced readings that would take place in a neighborhood over the course of an evening.”

Roberts leapt at the chance for Iowa City Poetry to facilitate the kind of programming Duer was proposing.

“I loved the idea from the start because it’s so true to our mission here at Iowa City Poetry, of bringing all different types of poets in our community together to learn from each other and celebrate together,” she said in an email. “Also: COVID. Also: spring! Outside readings felt so right for so many reasons.”

The inaugural event was held in May 2021 in Iowa City’s Northside neighborhood. Roberts estimates that, all told, around 400 audience members attended the dozen 20-minute readings.

“Some people brought camping chairs and took them from site to site. Others plopped right down on the grass, sidewalks, curbs or walls. Some hosts put out chairs from their homes, which was incredibly sweet. But most people just lolled and listened,” she said. “Some listeners came for favorite poets or to support specific friends. But a good number of people were in for the entire evening.” 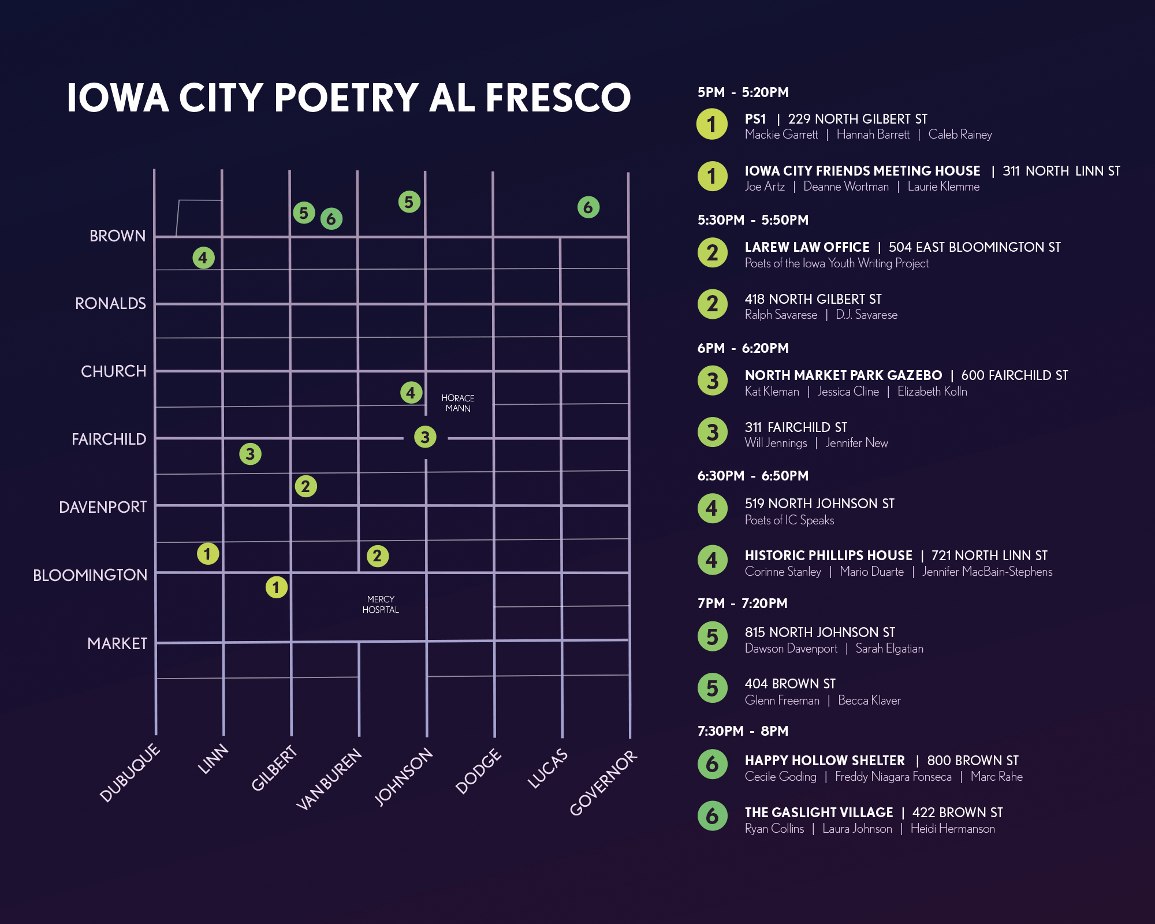 Iowa City Poetry volunteers were assigned at each site, responsible for handing out maps and schedules, implementing safety protocols (including wiping down the mic between poets) and introducing the readers. Portable sound equipment was carried between sites by other volunteers, and there was always an abundance of masks and hand sanitizer available.

This year, the logistics will remain the same, but the entire enterprise will shift from the Northside to College Hill.

“David argued, and I agreed, that to stay true to the spirit of the event, we won’t want to call on the same hosts and the same readers each year,” Roberts said. “Sites sometimes come with homeowners as readers, so to truly be more inclusive of the whole community, we need to bring Iowa City Poetry al Fresco to new neighborhoods.”

Roberts and Duer were drawn to the idea of ​​neighborhoods rather than business districts in part to offer audiences more room to spread out. But the distinct character of each neighborhood and the specific locations within it were to be considered as well.

“One of the beginning sites will be at the Alley Orchard behind New Pioneer Co-op. One of the ending sites will be the new PorchLight literary center near the end of East Washington Street. Another site will be College Green Park, the site of Occupy Iowa City 10 years ago,” Duer said. “Each venue adds personality to its reading.”

As they did last year on the Northside, the readings will begin at the edge of downtown and venture outward, deeper into College Hill. The progressive nature of the readings offers the feel of a pilgrimage, giving audiences time between each stop to engage with one another, to strengthen bonds.

“I’ve always gravitated to the idea of ​​writers and artists as a supportive community,” Duer said.

He first moved to Iowa City in 1975 and fell in with the Actualists, who made him feel welcome as a young writer and who still cites as an inspiration. Poetry has always been about a community for him, starting with poems shared with peers around the school lunch table when he first started writing seriously, as a high school senior. He’s also an alum of the 1970s Iowa City band Pink Gravy, describing the experience of reciting pieces between songs as “poetry as kinetic energy.”

And one of his most powerful poetry memories is seeing Adrienne Rich read at Phillips Hall at the University of Iowa in the late ’70s.

“I was sitting in the aisle, the place was packed. My future wife, Pat, was sitting in the middle section with her young son Sierra, who would eventually become my son,” Duer said. “He was fussy, and Pat was getting dirty looks from people sitting around her, so she decided to get up in the middle of the reading to leave. Rich saw this happening, stopped her reading, and asked her to sit back down. She was not going to let a young mother leave her reading because others were being inconvenienced.”

This is exactly the sort of community cultivation Roberts aims for with Iowa City Poetry, which is affiliated with the James Gang and sponsors youth poetry org IC Speaks. As the website says, Iowa City Poetry is all about “creating spaces where we can all grow as writers, learning with and from some of the most talented poets around.”

Although different stylistically and in terms of content, Roberts and Duer both write poems that are less monologue than conversation. And the way they are building this poetic community is a poem all in itself.