Kids use the Liberation Library installed at Essex and Harvard streets in The Port neighborhood on Tuesday. (Photo: Marc Levy)

Liberation Libraries opened Tuesday at five locations across Cambridge, a special subset of the popular little free libraries already found around town that are filled with books by black and brown authors.

Among the spring selections, adults will find free for taking “Breathe: A Letter to My Sons” by Imani Perry in nonfiction and “Another Brooklyn,” a novel by Jacqueline Woodson. But a cofounder of the project said at a ribbon-cutting event that he was more interested in having younger readers discover Useni Eugene Perkins’ “Hey Black Child” (for preschoolers), Kelly Starling Lyons’ “Going Down Home With Daddy” (for elementary-age kids), Tracey Baptiste’s “The Jumbies” (for middle-schoolers) and George Matthew Johnson’s YA novel, “All Boys Aren’t Blue.”

“Despite the intellectual prowess that this city has, it still really lacks in reading scores, particularly with our third-grade literacy rates,” said Tony Clark, cofounder and co-president of My Brother’s Keeper Cambridge, referring to an achievement gap exposed for decades through standardized testing in schools. “We must keep in mind that just as math literacy is integral to the trajectory of the most precious and vulnerable members of our village, you must have an honest conversation about how it is that a village with such good intentions doesn’t demand that 100 percent of all its third-graders read at grade level.” 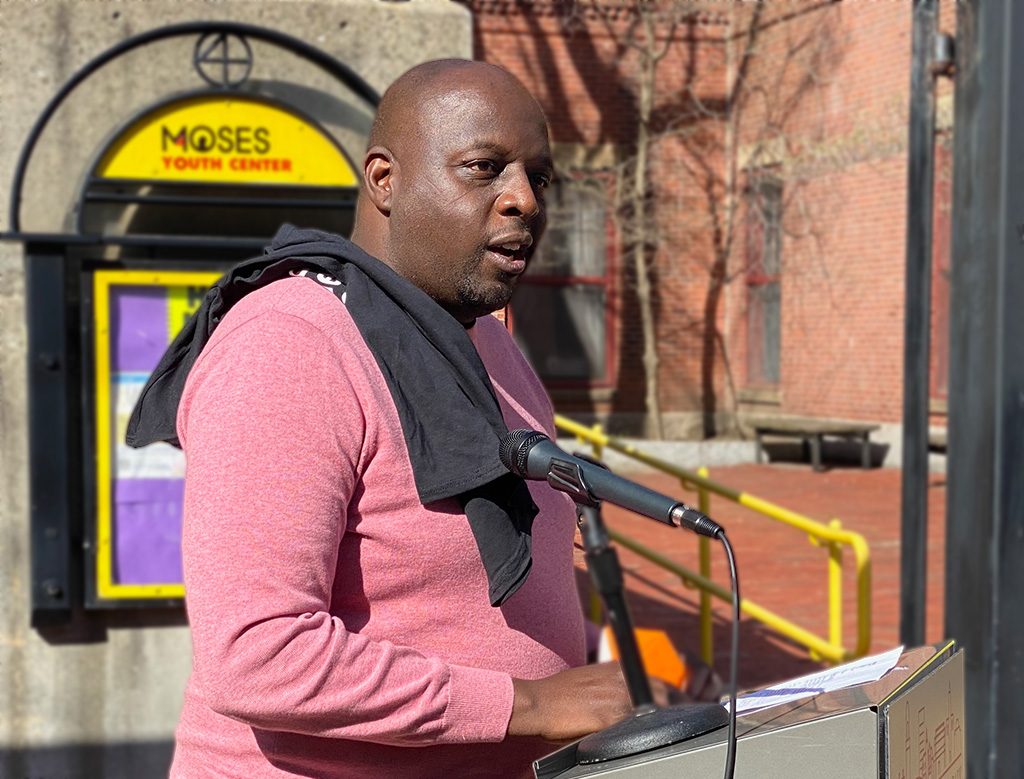 Tony Clark, cofounder and co-president of My Brother’s Keeper Cambridge, speaks at the Tuesday ribbon-cutting for the Liberation Libraries. (Photo: Marc Levy)

The libraries – gray, glass-doored boxes on posts with shelves of books inside – are a project of MBK Cambridge, the Mayor’s Office, City Manager’s Office and Cambridge Public Library. Mayor Sumbul Siddiqui said at the ceremony that she regretted various delays that kept them from going up sooner, but promised they were only to start in “helping our youth understand identity, liberation and black excellence at a young age.”

Organizers hope each book gets an author talk – Perry, a Cambridge native, could be a good place to start, Clark said – and related activities that will spark conversation taking on racial injustices and looking for solutions. The number of Liberation Libraries could also grow. But Clark is looking for even more. “I hope these libraries will serve as the catalyst to … incorporate the 1619 Project Curriculum into our schools, allowing the lessons to serve as additional discourse in our youth centers,” he said. 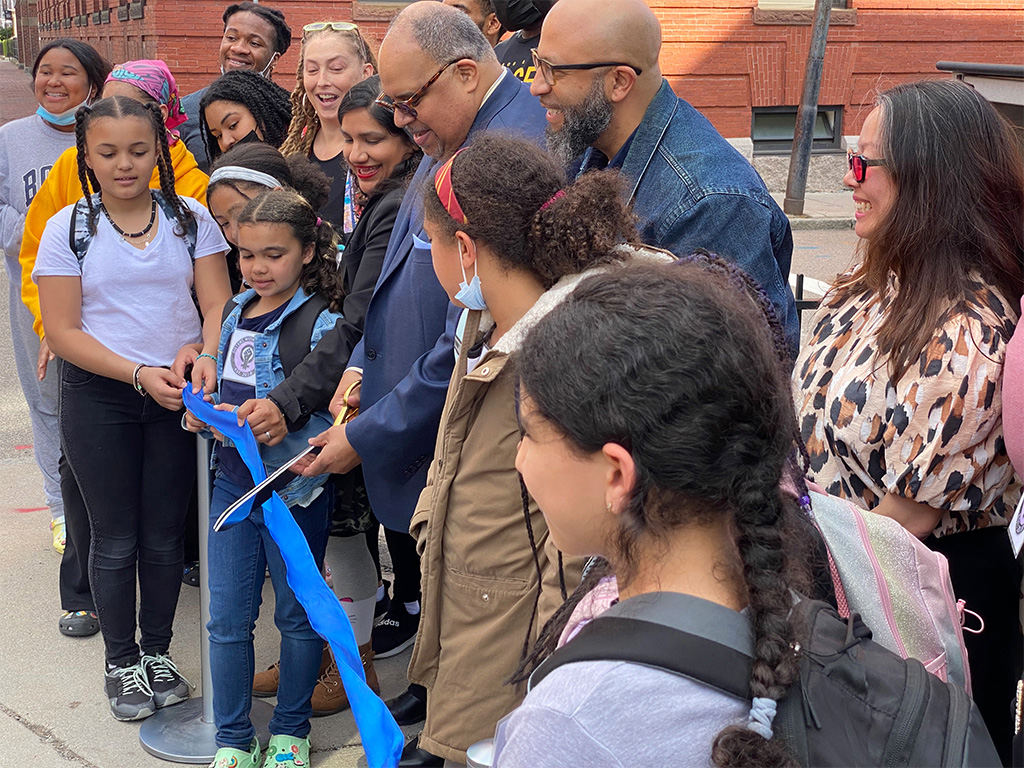 The ribbon is cut Tuesday on the Liberation Libraries with Mayor Sumbul Siddiqui (seen helping hold the ribbon) and Maria McCauley, the city’s director of libraries (at right). (Photo Marc Levy)

The Cambridge Public Library Foundation has begun the project with $10,000 just for books that will have to be replenished, said Maria McCauley, the city’s director of libraries. Speaking at the ribbon-cutting, she urged people to enjoy the Liberation Libraries and spread the word about them. “If they run out today, we will restock them very soon,” she said.

Clark noted the location of the ribbon-cutting and placement of the nearest Liberation Library – in front of the Moses Youth Center, named in honor of civil rights activists and educators Bob and Janet Moses – while speaking to a crowd that included a group of the kids he hoped would become the project’s most ardent participants. 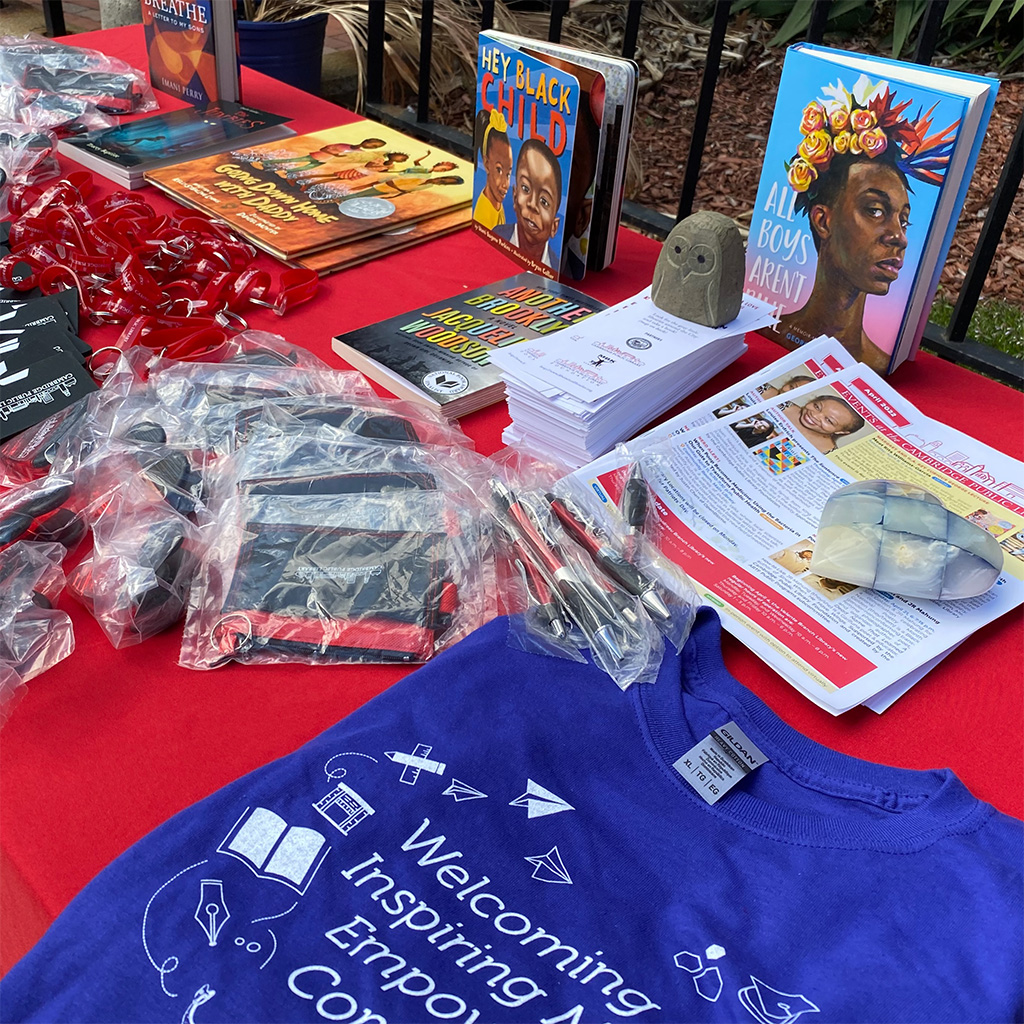 Some of the Liberation Libraries materials are displayed Tuesday before the event. (Photo: Marc Levy)

The libraries can help “create a community that shuns anti-intellectualism and pushes each of us to become accountable for the young readers in our village who stand here today,” Clark said.

The Liberation Libraries have a website and can be found at: