Voxa, the first Romanian streaming platform for audiobooks and e-books, targets a new round of financing of 1 million euros for the current year. The tech start-up reached a market capitalization of 6 million euros, compared to the value of 3.9 million euros in November last year, when the company was founded.

With the new funding, Voxa wants to consolidate its position in Romania and produces another 1,000 audiobooks. The platform also aims to expand abroad, a plan that has already begun. Voxa will enter the Republic of Moldova market in the second quarter of the year, where it aims to become the number one digital book platform. At the same time, Voxa plans to integrate into its platform a catalog of books in a new language in addition to Romanian and English, and in 2023 the start-up will enter a new market in the region.

The streaming platform is also working to integrate its application into the benefit packages offered by companies to employees. The start-up aims to reach over 100 large companies by the end of the year, and the corporate segment to represent 30% of the business by the end of this year.

“Last year, when we got the first round of funding through SeedBlink, we promised to build the Voxa streaming platform, to attract major publishers in Romania, to produce over 500 audiobooks, and reach 1000 subscribers. In just 6 months all our plans have materialized. We are eager to continue writing the Voxa story and to bring our favorite content closer to book lovers!” said Cătălin Meșter, CEO of Voxa. 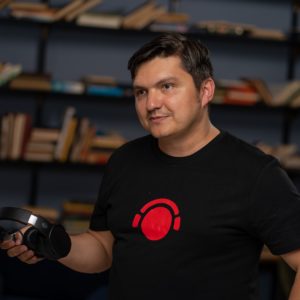 The Romanian start-up Voxa was officially launched in November 2021, after it managed to attract a round of finance amounting to 540,000 euros at the end of summer 2021 through SeedBlink.

Voxa is turning its attention to investment funds to further support its projects. The Romanian start-up estimates that recurring monthly revenues will reach 100,000 euros in the fourth quarter of this year. In addition, the company expects the number of users to exceed 150,000 by the end of the year.

“Attracting funding for entrepreneurs is generally a real challenge. We analyze several options, in terms of investment funds and crowdfunding platforms. Our business model is innovative, being at the intersection of tech and culture, which is an asset. The technology, which is the basis of our platform, offers us an advantage over other start-ups, being one of the main areas that attract the attention of investors”, said Cătălin Meșter.

Voxa users are predominantly in the 25-45 age group, technology, and book lovers. The platform makes available to users tens of thousands of books in e-book and audiobook format in Romanian and English, with unlimited access, but also book summaries. Five months after its launch, Voxa has reached over 50,000 users, 15,000 audiobooks and e-books, and 35 partner publishers.

Confident Communications is the new communication agency for Voxa. The strategy proposed by the Confident team has ambitious objectives both on the consumer side – which is aimed at providing reading enthusiasts in the country and abroad with access to culture in a simple and practical way – and in the B2B area, where companies can offer their employee subscriptions as corporate benefits.

Available on both iOS and Android, the Voxa app has a collection of over 15,000 books in e-book and audiobook format in Romanian and English, with unlimited access, as well as podcasts and book summaries.

“We are delighted to be Voxa’s partners in this endeavor to give a voice to books in Romania. Confident Communications is an agency with strong knowledge in the technology sector, in both B2B and B2C. We are convinced that together we will be able to bring reading closer to the readers, and Voxa will soon become the Netflix of books”, says Mara Gojgar, founder of Confident Communications.

Voxa also aims to change consumer habits in our country, said company representatives, as recent data shows that only 1% of Romanians read digitally, with the European average at 15%.

“Every day, Voxa’s studio records audiobooks, narrated by famous actors, such as Șerban Pavlu, Mihai Călin, Monica Davidescu and many others. Both avid readers in Romania, and also those time-poor but would like to read, can now enter the Voxa universe. We have the largest catalog of digital books in Romania, available at everyone’s fingertips”, says Cătălin Meșter, CEO of Voxa.

The rate for a standard Voxa subscription, which includes unlimited access, is 48 lei (less than 10 euros) per month for a library worth 400,000 euros. With corporate partnerships, Voxa offers cost-effective benefits. On top of this, the company has a close relationship with its customers and is actively involved in promoting the use of Voxa, by organizing book clubs and other activities.