What is a “trap queen”? If I’m honest, I’m not entirely sure I could give a clear and concise definition (and I know I’m not alone). However, the internet has plenty, some of which refer directly to Fetty Wap’s 2015 hit and others that read almost verbatim to the definition given in the first chapter of Bad and Boujee: Toward a Trap Feminist Theology (Cascade Books), written by Jennifer M. Buck, pictured below.

If a picture is worth a thousand words, only a few are needed to confirm that Buck, a theological scholar, is white, while the dark-skinned, Afro-sporting subject on the cover of her latest book is most decidedly not. Did we mention it was published mid-Black History Month?

If you think that’s ironic, check the book’s synopsis, as posted on Amazon:

This book engages with the overlap of black experience, hip-hop music, ethics, and feminism to focus on a subsection known as “trap feminism” and construct a Trap Feminist Theology. Interacting with concepts of moral agency, resistance, and imagination, Trap Feminist Theology seeks to build an intersectional theology emphasizing women’s agency in their bodies and sexuality while also remaining faithful to the “trap” context from which they are socially located. Such a project will redefine the “trap” context from one of marginalization to one of joy and flourishing within black feminist theology. This theology overlaps with black ethics in subversive empowerment that forms a new normative ethic and family system within a subsect of the black community. Trap feminism emerges out of trap culture, where the black woman is creating a space outside of the barriers of poverty harnessing autonomy, employment, and agency to allow for a reinvention of self-identity while remaining faithful to social location.

Umm OK. That was a lot of explanation and assumption about the lived experiences of othersnot?

Red Lip Theology author and contributor to theGrioCandice Benbow likely voiced much of our shock and awe (despite not much shocking us anymore) when she tweeted: “I KNOW A WHITE WOMAN DID NOT WRITE A BOOK ABOUT ‘trap‘ FEMINIST THEOLOGY!! I KNOW SHE F**KING DID NOT!! I KNOW THAT DID NOT HAPPEN!!” 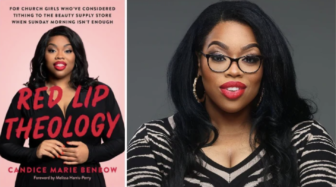 First of all, how much entitlement does it take to presume to “redefine the ‘trap’ context” when you had no hand in creating it in the first place? (I didn’t either, so I feel fairly objective on objecting to this point.) Second, as Whitney Alese pointed out for Medium’s Zora, how are you an expert on this aspect of Black culture yet don’t adhere to capping the “ B” in Black?

Third, who thought this was a good idea??? After calling out appropriation so long, it seems passé and struggling to hold accountable two-year-old promises of more diversity, equity, inclusion, and elevated platforms for Black talents in every arena. So how did this project, presumably proposed by this author, get greenlit in the first place? How was this author, at the very least, not compelled to “Pass the Mic” to someone who might have first or even secondhand experience on a topic in which she could only ever be a spectator?

Well, as we have seen, no one is stopping her, including the publisher of this book, Cascade Books, an imprint of Wipf and Stock. No one is stopping institutions like Yale Divinity School from awarding her $10,000 for this project, a grant that could have gone to a Black woman writer. That is the problem, no one is stopping people like Jennifer Buck, a theologian who formerly wrote about Quakers, from writing about an experience that is very obviously not her own. No one is saying to folks like Jennifer “Just because you physically can write this book doesn’t mean that you should.”

So, who is the white woman in question? According to her Amazon author page, Buck is an Associate Professor of Practical Theology at Azusa Pacific University who previously earned a Ph.D. in Philosophy of Religion and Theology from Claremont Graduate University, and an MDiv from Fuller Theology Seminary. Buck is also a licensed minister in the Quaker church, making her fully qualified to speak on Quaker philosophy, theology, and misconceptions. As for speaking on the trap? Not so much.

As is true of many folks put on the defense, Buck and her publishers reportedly doubled down, even going so far as to allegedly edit the comments and ratings posted on Amazon and social media in response to the text. And while in the grand scheme of world events, yet another dip into Black people’s business might seem trivial, as at least one commenter pointed out, transgressions like this can bolster other hot-button issues.

Take book bans, for instance: While books by Black writers—and Black and queer writers, in particular, have been targeted by self-appointed censors, Buck’s journey to the dark side doesn’t validate or elevate this aspect of the Black experience but further suppresses the voices most qualified to speak on it.

“In February, Wipf and Stock Publishers released “Bad and Boujee: Toward a Trap Feminist Theology” by Jennifer M. Buck. Recently, a strong backlash to the project emerged on various social media platforms. We quickly realized that criticisms of the book—and criticisms of Wipf and Stock for publishing it—have serious and valid criticisms.

We have pulled the book from circulation and continue to receive and process critical feedback in the hope that we might learn from our critics—including the ways our critics state that we have harmed Black women and others. We will continue to consider tangible ways to repair the harm and to make the changes necessary to avoid making the same mistakes. We humbly acknowledge that we failed Black women in particular, and we take full responsibility for the numerous failures of judgment that led to this moment.

Our critics are right: we should have seen numerous red flags, including but not limited to the inappropriateness of a White theologian writing about the experience of Black women (the issue of cultural appropriation is pervasive, from cover to content), the lack of Black endorsers, and the apparent lack of relationship with Black scholars, especially those who originated the trap feminist discourse. We are deeply sorry to have published a book that has betrayed the trust of our authors and readers and that has damaged our ability to support work that we both value and believe is vitally important to the church and world at this time—especially the work of womanist and Black feminist theologians. We pledge to continue to listen, and we resolve to do better.”

Maiysha Kai is Lifestyle Editor of theGrio, covering all things Black and beautiful. Her work by Ella is informed by two decades’ experience in fashion and entertainment, a love of great books and aesthetics, and the indomitable brilliance of Black culture. She is also a Grammy-nominated singer-songwriter and editor of the YA anthology Body (Words of Change series).