Back in 2019, the now-CEO and founder of the Feminist Book Club, Renee Powers, bought the URL “feministbookclub.com” on a whim while she was still in her PhD program in Illinois. Today, the FBC has become more than a book club, and the website is a portal to an online community committed to intersectional feminism and a love of literature.

“I see myself as a trail guide rather than a leader,” Powers says. “My perspective on a conversation is not the only way and is not always the best way.”

For the FBC, monthly Zoom meetings—to talk about the group’s book of the month—are just the tip of the iceberg. In online community groups, members can also regularly discuss feminist issues and their intersections with the topics of race, sexuality, and class. The FBC creates content to engage the community in feminist discussions through a newsletter, podcastand Blog, which covers everything from author interviews to commentary on current events. The blog and podcast began as individual projects for Powers, but she had always hoped to include more voices than just her own.

She hopes for the FBC to be one part of the battle against kyriarchy, an all-encompassing word which refers to all systems of oppression, including racism, Islamophobia, and transphobia, just to name a few.

Along with the books themselves, FBC subscribers can opt to receive themed subscription boxes with goodies from women-, queer- and BIPOC-owned businesses, including Minnesota-based companies like Homebody MN Candles, TBR Cardsand the Minneapolis Craft Market. This is part of Powers’ belief that one of the best ways to live out your values ​​is to put your money where your mouth is, so to speak, by supporting other small businesses in addition to investing your time and energy in feminist education and dialogue .

Past box themes have included Afrofuturism, women in sports, true crime, beach reads, and even a collaboration with LA’s Finest actress Gabrielle Union. Plus, each month’s theme corresponds with a charity or social justice organization that the FBC is supporting. 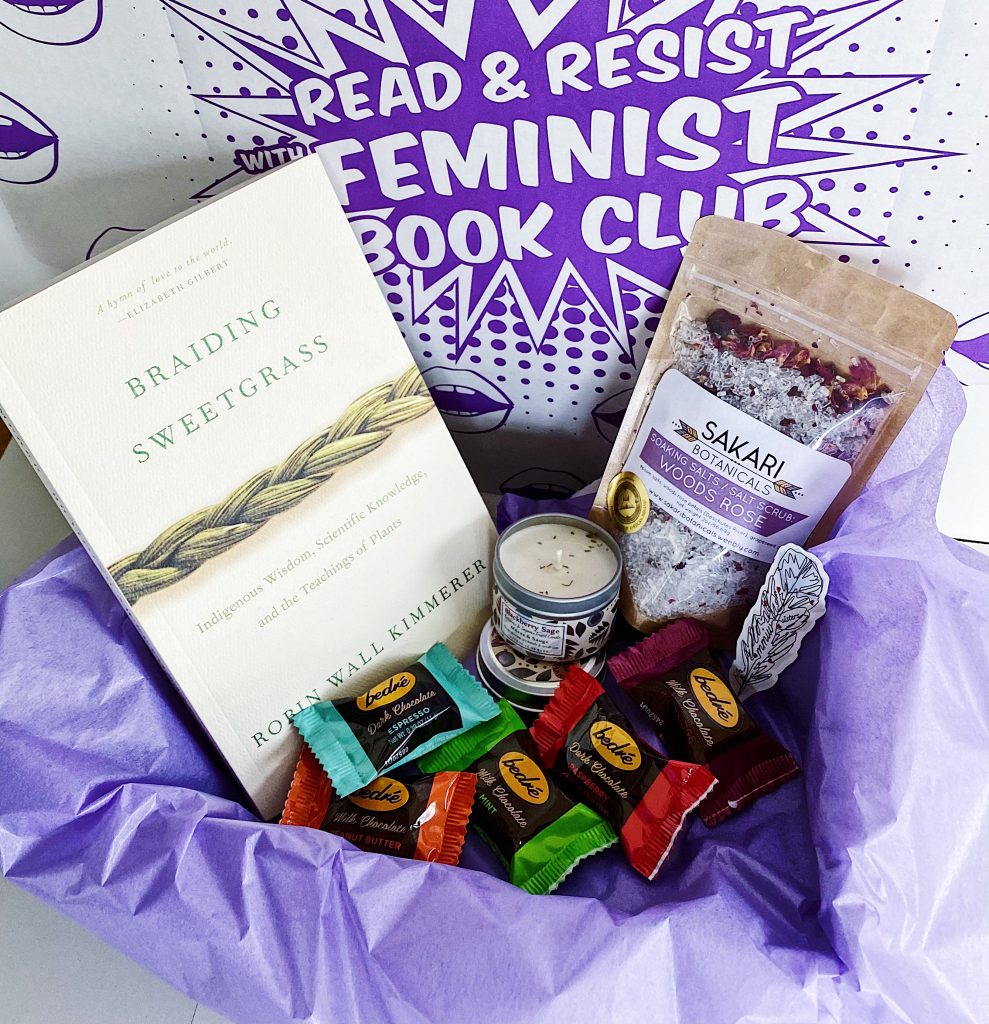 The FBC online community can trace its roots back to 2018, when Powers began to align her own book club of friends with her podcast and interest in subscription services.

At the time, Powers was a PhD student and hosted a podcast that had originally been a failed dissertation idea. Despite the initial rejection of the podcasting project, which was going to interview women about online privacy, Powers still believed in the importance of sharing conversation about women’s issues and decided to move forward with it—just in a slightly different direction.

Authors noticed her love of reading and interest in feminism, so they began pitching Powers to talk on her podcast, somewhat diverting the topics away from the experience of gender and privacy online. “For about two years, I talked to only authors and others in the book space,” Powers says.

In addition to her work in podcasting, Powers was informally conducting a book club through a Facebook group for a few friends who wanted to read books through a feminist lens. Buying the URL was the official first step in gathering Powers’ Facebook group and podcast into a cohesive business and community with a mission to promote intersectionality through reading.

Back then, Powers and her partner were living in Chicago, but they moved to Minnesota to purchase his childhood home when the FBC was still in his infancy. Now, Powers says she “cannot speak highly enough of the entrepreneurship community in Minneapolis,” particularly regarding the support she received as an alumna of Lunar Startupsa business incubator that specializes in support for female and minority-owned entrepreneurial endeavors.

Power attributes most of her growth to this local accelerator because of the connections she made with other local entrepreneurs. “It’s been like gasoline on a fire,” she says, “knowing that the small business community in the Twin Cities has my back, and anything I need is just a conversation away, so long as I ask questions.”

After a few years of growth into a successful business and community, the FBC is continuing to evolve. After concerns about protecting the privacy and information of FBC members when conversing in the Facebook group, the club transitioned off Facebook and onto Mighty Networks, a woman-founded and -owned social platform that Powers says is “all of the best parts of Facebook without the bullshit.”

Since the grand launch of the new FBC group on Mighty NetworksPowers has been pleasantly surprised by the new online space for the community.

“It is already exactly what we were missing in our Facebook and Slack groups,” Powers says. “People are really forthcoming and vulnerable and sharing a lot. It’s unexpected, but I am really excited to see how we can harness that energy and continue to have the kinds of conversations that we’re looking for.” 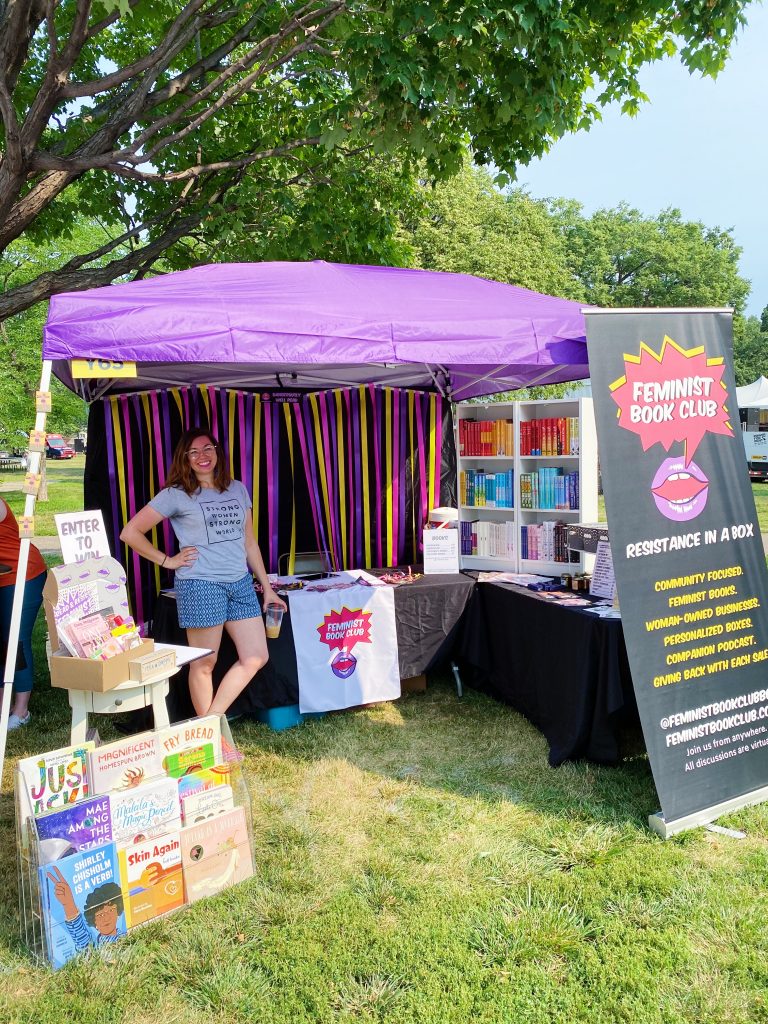 The official Mighty Networks group, which has grown to a few hundred members, are intended to be both educational and social spaces. The conversations the FBC has about feminism and its intersections with other issues can be challenging to talk about, due to differing opinions and lived experiences, but Powers is optimistic about the eagerness of those in the community to engage with one another.

“Allowing for dissent, for constructive criticism and allowing space for people to ask questions, try things, fail at things and be okay with it and getting back up–It’s been a test of resilience,” Powers says.

Powers, who is white and cisgender, aims to be cognizant of how her identity and role in the company affects other community members and the conversations they have together. “If I don’t decenter my identity, I can’t create a community that is compassionate and intersectional for people who don’t have my same identity markers,” she says.

The Future of FBC

March was International Women’s Month, for which the FBC donated a portion of sales revenue to support the Women’s March of Ukraine, created a podcast spotlighting non-American activists, and hosted a talk with Lynx assistant coach Rebekkah Brunson to discuss women in sports and business . Then, the FBC hosted an art exhibition featuring works by femme, woman, and queer artists, complemented with music and mocktails from Social Mixersa women-owned beverage company in Falcon Heights.

Just as the Minneapolis small business community taught her, Powers is dreaming big and hoping to hit $1 million in revenue this year while continuing to grow engagement on the club’s podcast, Instagram, and TikTok accounts. She says her end goal is for the FBC to become “the go-to online resource for intersectional feminism and feminist media.”

As Powers says, “We’re history in the making, so let’s make some noise and celebrate!”