Nobody knows for certain why Rangers chose to wear blue for the first time in the second game they played, an encounter with Clyde which they won by a resounding 11-0 scoreline, after their formation in 1872.

“It has never been determined,” said David Graham, the lifelong Rangers supporter and Ibrox season ticket holder who has co-authored The Rangers Shirt: The Official History with his friend and fellow fan John Smith.

“They decided at the first meeting they had that they were going to wear royal blue shirts, white knickers and blue and white hooped socks. But it is unclear who came up with the color or why. The early records of the club are missing. Their minute books only start from 1882.”

It is fair to say that the call, whatever the reason behind it, has proven to be a good one. Light blue has become synonymous with the Glasgow giants and evokes warm feelings and even arouses strong emotions among their legions of followers. It certainly does in Graham.

An avid collector of Rangers shirts, he grew increasingly interested in how they had changed and developed over the years. His passion inspired him to put pen to paper. The result is a fascinating and forensic account of the strip’s evolution which is required reading for anyone who shares his allegiances to him or simply has a love of football.

Click here to get your copy of the magazine

His lavish publication, which he has spent no fewer than 10 years researching, is packed full of interesting titbits of information, amusing anecdotes and surprising revelations. The famous sepia-tinted photograph of the Rangers team which played Vale of Leven in their first Scottish Cup final in 1877 – a line-up that comprised founder members Peter Campbell and Moses McNeill – is well known to every Rangers supporter. However, the oft-repeated assertion that the strip, which is all white with a star on the chest, was the one they took to the field wearing during the early years of their existence is a fallacy.

“People have said it was Rangers’ first shirt,” said Graham. “I don’t believe that for a minute.

“Nobody is 100 per cent sure, but I am as certain as I can be that it wasn’t a Rangers shirt at all. There is certainly no evidence at all of them wearing it in a match.

“It was worn for the purposes of the photograph. It appears to be a shirt that was borrowed from Clyde Rowing Club. There had been comment in the press about how tatty Rangers’ blue shirt looked. Some of the players at that time were members of the rowing club. So it seems to be that it was borrowed for the photograph.

“Tom Vallance, the captain, has got a Scotland badge covering the star in the picture. When you played for your national team at that time you got to keep the shirt and you were allowed to cut the badge off and stick it on your normal league shirt to show you were an international.”

That practice fell by the wayside over the years. Much else has altered in the decades since.

“There have been changes in fashion,” said Graham. “The strip started off as a sort of grandad collar shirt. It then became what could only be described as a dress shirt with collars and cuffs.

“The material changed around 1900 when they were brought in worsted wool. It progressed from there in the 1920s and 1930s when Umbro got involved. They used a material which they called Tangeru and was based on Peruvian cotton.

“By the 1950s and 1960s European-style shirts with v-necks came in. The famous one that a lot of Rangers fans look upon as the iconic Rangers shirt, blue with a white v-neck, was worn around that time.”

A cry that is popular among Celtic fans on match days is: “C’mon the Hoops!” It stems, of course, from their distinctive hooped strip. But Rangers actually wore a hooped jersey long before their city rivals were even formed and did so for years after the Parkhead club arrived on the scene in 1888.

“They changed their home kit from blue to blue and white hoops in 1882. They had just had a torrid season and their then secretary was superstitious. He felt something needed to change. So they changed their strip.

“Their players weren’t that happy about it and their results didn’t improve any. At a board meeting the following year it was decided to change back to royal blue and it has stayed royal blue ever since.

“But they used blue and white hoops as a change strip for a couple of years from about 1907 or 1908. And they kept returning to it. They revisited it in the 1920s, 1930s and 1940s. I don’t think it would go down very well now! But Rangers fans can always tell Celtic supporters ‘we had hoops before you were even invented’.”

An urban myth which has gained traction in modern times suggests the Rangers team wear black and red socks because of the line in The Billy Boys which goes: “We’re up to our knees in Fenian blood”. But that is another misconception.

“It’s utter nonsense,” said Graham. “The black socks with red tops seemed to come in around the late 1890s, early 1900s, long before the song. Rangers and Celtic were pretty pally back then. There was nothing sectarian in it.

“They would occasionally wear other socks. But from 1904 onward it was always black with red tops. There are various theories about why the socks changed at that time.

“But the account that I would go with, and this is pure guesswork, is that Rangers were really entrenched in the whole Govan thing by then. The new Ibrox opened in 1899. The old colors of the Govanburgh were black and red.

“There was a bit of talk around the time about how it represented the funnels of the ships they were building in the shipyards, black with red tops. That is the romantic view I like.”

Every fan has their favorite Rangers strip and Graham, a charge nurse in an accident and emergency ward in his native Glasgow who grew up watching the great Graeme Souness and Walter Smith sides of the 1980s and 1990s, is no different.

Click here to get your copy of the magazine

“When you are young and start going to football matches you definitely associate with the strip the team wears and hold it in deep affection in your later years,” he said.

“My favorite Rangers strip was probably the adidas one the team wore between 1992 and 1994. They were such a successful team then. They were doing so well domestically and in Europe as well.

“I wasn’t old enough to remember the shirts from the 1960s. But guys who watched the team in that era will consider those strips as the iconic ones.

“These days clubs have little input into what they are offered. The kits come from a template. That 1992 to 1994 Rangers kit I mentioned was a favourite. But Marseille had the same kit, only it was white with blue shoulders. They played each other in the group stages of the Champions League that season.

“Very few kits are bespoke. Some fans look on the red shirt that Rangers wore away against Grasshoppers in Europe in 1996 as being a one-off. But it came from an adidas template and was used by several sides, including the Turkish national team and Luzern, the Swiss team.”

Rangers managers have, however, had a say on what strips their players wear in the past. With good reason. Graham discovered that when the Ibrox club recorded their greatest victory they were hampered, not helped, by their attire. 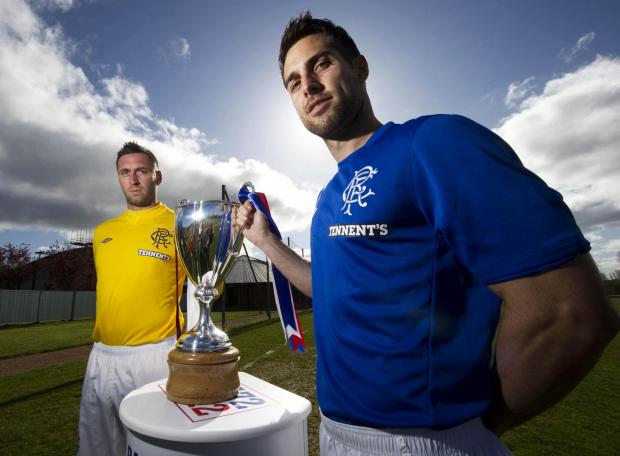 “When Jock Wallace came back to manage Rangers for a second time in 1983 he was keen to go back to a more traditional shirt,” he said. “At that time, it was blue with white pinstripes. The following year it became blue with a v-neck that crossed over at the front.

“The strip can make a difference to the team. Colin Stein told me that when Rangers played in the European Cup Winners’ Cup final in Barcelona in 1972 they were effectively wearing longsleeved woolly jumpers. The Russians turned up with lightweight short-sleeved shirts. Rangers, like typical Brits abroad, turned up with heavy Umbro shirts.

“I found that really weird because the strip that Rangers wore during the 1960s was predominantly shortsleeved. It seems a bit bizarre that they went over to Spain in May to play in a European final and were supplied with these long-sleeved shirts.

“The Rangers players were only given one set of strips which were embroidered with the match details. At half-time they changed into a normal league shirt. So at full-time they swapped their league shirts with the Russian players and were able to hang onto the special version.”

The Rangers Shirt: An Official History has become a treasured possession of many fans since it was published late last year – and even the current manager has a copy.

“I have had very positive feedback,” said Graham. “In fact, I have been blown away by some of the comments I have received. The club love it as well. Some of the board members have it. They even asked for a book for Giovanni van Bronckhorst when he arrived. It went in his welcome pack from him.”

The Rangers Review is making its exciting first foray into print with an 84-page souvenir glossy magazine to mark the 150th anniversary of the club.

Featuring exclusive new interviews with club legends, in-depth reviews of the biggest matches the club has ever had, and stories you probably won’t have heard before from the club’s long history, this is a magazine that Rangers fans will want to keep forever .