A politician, economist, and jurist, Dr Bhimrao Ambedkar was instrumental in drafting the Constitution of the country and was also a vociferous advocate of women’s rights and equality. Honoring him, every year his birthday anniversary is observed as Ambedkar Jayanti in the country.

Born on April 14, 1891, Dr Ambedkar was a student at Bombay University, followed by Columbia University, USA, and London School of economics. He was the first law minister of Independent India. Owing to his role in framing the Indian constitution, he is also known as the Father of the Indian Constitution.

He was posthumously awarded India’s highest civilian honour, the ‘Bharat Ratna’ in 1990. Dr. Ambedkar’s life and thoughts still inspire millions of people today. On his birthday, therefore, we bring you some powerful quotes and messages. Let his ideas live on him.

*“Humans are deadly. So are ideas. An idea needs propagation as much as a plant needs watering. Otherwise, both will wither and die.”

*”A great man is different from an eminent one in that he is ready to be the servant of the society.”

* “Political tyranny is nothing compared to social tyranny and a reformer, who defies society is a more courageous man than a politician who defies government.” 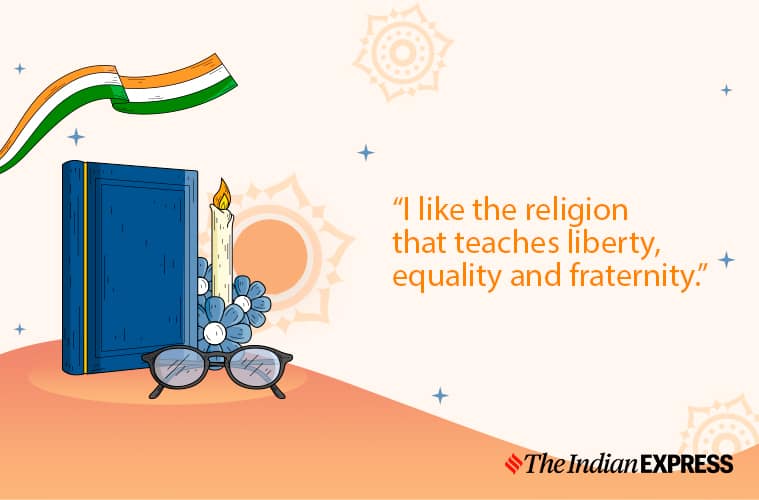 Ambedkar Jayanti 2022: Dr Ambedkar knew 9 languages ​​and had studied across the world. (Designed by Angshuman Maity)

*“History shows that where ethics and economics come in conflict, victory is always with economics. Vested interests have never been known to have willingly divested themselves unless there was sufficient force to compel them.” Ambedkar Jayanti 2022: He was the only person who did Satyagraha for drinking water. (Designed by Angshuman Maity)

*“I do not want that our loyalty as Indians should be in the slightest way affected by any competitive loyalty. Whether that loyalty arises out of our religion, out of our culture, or out of our language.” Ambedkar Jayanti 2022: Dr. BR Ambedkar was the first man in India who pursued a doctorate. (Designed by Angshuman Maity)

*”I want all people to be Indians first, Indian last and nothing else but Indians.” *“Slavery does not merely mean a legalized form of subjection. It means a state of society in which some men are forced to accept from others the purposes which control their conduct.”

*”Democracy is not merely a form of Government. It is primarily a mode of associated living, of conjoint communicated experience. It is essentially an attitude of respect and reverence towards our fellow men.”