St. Louis author and poet Jason Sommer’s father, Jay, is 98 years old and losing his memory. More than 70 years after arriving in New York from World War II-torn Europe, he is forgetting the stories that defined his life of him, the life of his family, and the lives of millions of Jews who were affected by Nazi terror. Observing this loss, Jason Sommer decided it was time to make sure his father’s memories of him were safe. That story is now “Shmuel’s Bridge.”

In 2001, he and his father embarked on a trip to Eastern Europe to retrace his life and the places he lived along his journey. Father and son travel from the town of Jay’s birth to the labor camp from which he escaped, and to Auschwitz, where many of his family were lost. The stories Sommer’s father told all his life of him came alive. So, too, did Sommer’s own memories of the way his father’s past from him complicated and impacted Jason’s own inner life from him.

“Along with my camera I brought a notebook, expecting to record things for myself,” said Sommer. “I hadn’t written a memoir before, beyond poems, and I had no expectation of writing a book. It was only years later when my father’s memories began disappearing that I felt the urgency to preserve his experiences of him, and my experiences of him with him.

Now, Sommer, an award-winning poet and member of the Central Reform Congregation, has turned their incredible journey of both life and places into a memoir. 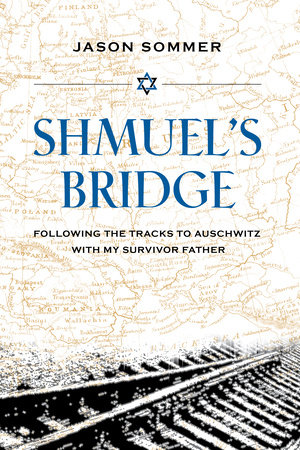 After escaping from a labor camp in Budapest in 1944, Jay joined the Russian army and later emigrated to the United States, where he got his college degree, had a successful teaching career, and built a family.

In an effort to keep those and earlier memories intact, Sommer hit upon the idea of ​​showing Jay videos from a trip they had taken in 2001 to Eastern Europe to witness the places “that were the setting of his Holocaust experiences.”

As the two revisit these memories together, the past and present beautifully collide in evocative prose and excerpts of poetry (“he’s penned beneath/ the stairs of a Budapest apartment house/ for days, in terror”) that whisk readers from the steps of Erzsébet School in Budapest—where Jay and other survivors began their “struggle toward a new life” in 1945—to the bridge where father and son commemorated the death of Jay’s brother Shmuel, who was killed en route to a Nazi camp.

“My father’s younger brother was murdered by the Nazis in his attempt to escape a train bound for Auschwitz,” said Sommer. “He leapt into a river as the train crossed over a railway bridge. He was perhaps my father’s greatest personal loss of him in all the destruction of his family of him. ”

Connect with your community every morning.

Sommer says he came to admire the uncle he never met—for his final courage but also for what the stories his father told about him as a person, “his strength and his willingness to defend others and make sacrifices for his family. The search for the place he resisted—that bridge—became a bridge between my father and me,” he said.

“Shmuel’s Bridge” shows history through a double lens: the memories of a growing son’s complex relationship with his father and the meditations of the son who, now grown, finds himself caring for a man losing all connection to a past that must not be forgotten .

Any father-son relationship will have its complexities but when that relationship includes such a difficult personal history on the father’s side, it just gets more complicated.

“My father went through experiences I don’t think I can adequately imagine, and I have dedicated a lot of energy to trying to do just that,” said Sommer. “He spoke about the Holocaust and what had happened to him. As I grew up and learned more and more about what he’d been through, and managed to overcome, I felt that my life was and would always be insignificant in comparison.

“Sometimes I simply resent the presence of the Holocaust, shadowing our lives. In the natural course of things, in my adolescence, the times I felt I wanted I had to resist what he of me, or for me, always had that other consideration—he’d suffered and who was I to cause him any more pain? But he wasn’t always right. And the damage done to survivors plays out in families.”