This week’s Marvel Comics’s Avengers contain a tribute to George Perez that caused a few people to inquire to Bleeding Cool about the man, and if he was still with us. I’d like to confirm that yes, George Pérez hasn’t gone anywhere, and indeed recent reports have seen him feeling a lot better and healthier of late. But you can see why the page, from avengers #55, might have suggested otherwise to some.

Last year, legendary comic book creator George Perez told family, friends and the world that he had stage 3, inoperable pancreatic cancer. That he had chosen not to receive further medication. And he had a life expectancy of six months to one year. The outpouring of memories and well-wishes from comic book creators and fans was a torrent. And there were calls and a petition for Marvel and DC to republish his JLA/Avengers comic book series, which recently happened, and George got to see it.

The above message, arranged by Marvel SVP Tom Brevoort, featuring Perez’ artwork for the Avengers, was also seen in advance by Perez. And after enquiries, they have been told it was only meant to pay tribute to the man, rather than anything of a memorial nature. George is very much still with us, and his influence is strong in the rest of the avengers #55 out today as well, such as in this page by Javier Garrón. As the team head off to battle Mephisto… 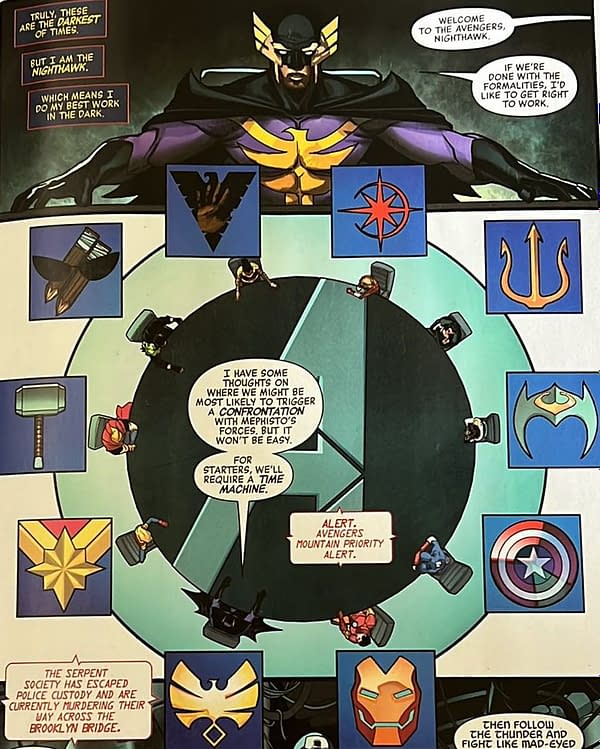 BeforeChristmas, George Perez posted his news to Facebook, saying “there are still many more serious matters to contend with as well as my wife Carol and I work to make my own passing as peaceful and uncomplicated as possible. My new will is now ready to be signed and witnessed I’ve taken all steps with the bank to have my future royalties transferred to my wife’s name and account, and we’ve already made an appointment to discuss my options for hospice care when the need finally arises. with, I look forward to making the most of the New Year with charity signings, meet and greets, and maybe even a convention or two. remaining life to the fullest. I’m flattered, moved, and humbled by all the kind words heaped upon me in the literally thousands of messages I’ve received since I first announced my diagnosis. I can only hope that, even in the short time allotted to me, I can continue to be worthy of those words.”

AVENGERS #55
MARVEL COMICS
FEB220960
(W) Jason Aaron (A/CA) Garron, Javier
THE COMING OF THE NIGHTHAWK
Last seen during the events of HEROES REBORN, Nighthawk of the Squadron Supreme of America returns to the scene with a dark and mysterious purpose. Is he friend or foe to the Avengers? Nobody’s sure. But there are no such questions about the deadly new incarnation of the Serpent Society!
RATED T+In Shops: Apr 20, 2022
SRP: $3.99