What defines a Hall of Fame pitcher? There has been a lot of debate about what the qualifications are for a pitcher to be enshrined in Cooperstown, leading to an overall lack of clarity. In the end, though, every voter is going to have their own evaluation system, which, in my opinion, makes the voting process more exciting!

I bring this up to discuss Justin Verlander, who may very well find himself in Cooperstown soon. With over 3000 innings pitched and strikeouts, a career fangraphs Wins Above Replacement of 72.3 (baseline for Hall of Fame is around 60), two Cy Young awards, an American League MVP award, and eight all-star appearances, it’s safe to say that Verlander has what it takes to be a Hall of Famer .

Yet, this is not what Verlander is currently concerned about. At the age of 39-years-old, he’s still facing a strong rotation for an Astros team that is looking to win another World Series championship. It was unclear what to expect from him coming into the season, but he’s off to a fast start, begging the question if he’s still the same ace that he always has been. So, is this the same Justin Verlander that could find himself in the AL Cy Young race and a premier starting pitcher for fantasy baseball leagues?

Feature Promo: Want a free RotoBaller Premium Pass? Check out these sports betting promo offers from the top sportsbooks! All new sign-ups get a free bonus offer on their first deposit, and a free year of RotoBaller’s Premium Pass for all sports ($349 value)!

It’s safe to say that Justin Verlander has been pitching for a very long time. In fact, when he made his MLB debut, this author was only three years old! Taken with the second overall pick in the 2004 MLB draft, he was always seen as a future ace with unprecedented velocity for that time, and immediately won the Rookie of the Year award. With that type of trajectory, it was very easy to see where he could be heading, though no one would have predicted he would take his career from him to where he did.

Between 2007 and 2019, Verlander failed to eclipse 200 innings in just one season. I’m sorry, what? Even though many of those seasons came at a time when pitchers went deeper into games, it is still absurd that a pitcher can manage to have such a lofty workload for 13 of 14 seasons. Simply put, the Tigers could consistently count on him to provide a lot of volume for them, and with the quality being there as well, he was set up perfectly to be one of the most valuable pitchers during his peak.

Between 2014 and 2015, it appeared that Verlander’s reign was coming to an end. His strikeout rate was down to 19%, his ERA and main ERA indicators were over 4.00, and his velocity was down to 93-93.5 MPH. Add in the fact that he missed a decent chunk of the 2015 season due to strained triceps, and it seemed to be a typical decline for a pitcher in his 30s.

Then, the renaissance took place. In 2016, his strikeout rate went up to 28.1% with 227.2 innings pitched, leading him to finish second in the AL Cy Young award race. In 2017, his numbers took a bit of a dip, but he was still much more effective in missing bats (25.8% K) than he was previously.

Ah, so the decline finally came again, right? Nope! See, Verlander was traded to the Astros during the 2017 season, where he’d go on to help them win the World Series. Then, using their voodoo magic, they turned him into a pitcher with a 35.1% strikeout rate, 30.4% K-BB ratio, and a 2.78 skill interactive ERA (SIERA); he finally got revenge for missing out on that Cy Young award in 2019. Suddenly, at 36-years-old, he was more dominant than he was at his peak!

What was the key to this? As always, it all came down to velocity: 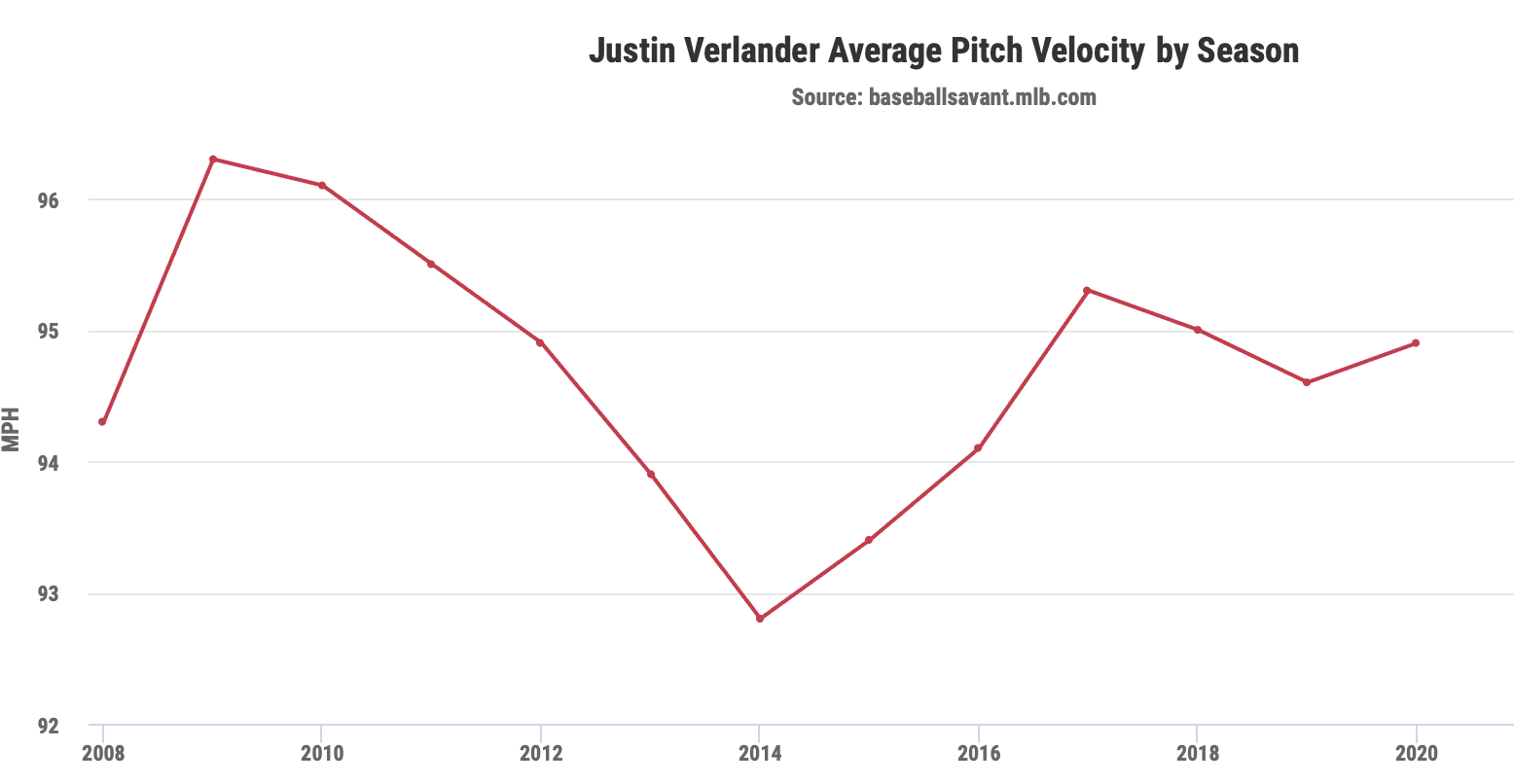 As we discussed, Verlander’s velocity was on the decline and hit its floor in 2014. However, whether it was an improvement in his mechanics or a change in his training regimen, he was able to get back to his old peak velocity; it’s likely he also pitched with maximum effort, though that did n’t affect his pitched innings of him. Regardless, though, what matters most is that Verlander had established himself as, once again, one of the best pitchers in baseball.

Then, 2020 happened. After just one start, it was revealed that he would need to undergo Tommy John surgery, which also caused him to miss all of 2021. All of a sudden, he was a 39-year-old who had pitched six innings over the past two years; that doesn’t sound pretty. Now, when the Astros brought him back on a two-year, $50 million contract, it was an encouraging sign that he may be healthier than we thought.

Still, there was plenty of skepticism on how effective Verlander would be this year. After all, for a pitcher to come back from not pitching for essentially 2+ years at 39-years-old would be practically unprecedented. Yet, so far, Verlander is proving to be once again one of a kind.

There is nothing better in fantasy baseball than getting an immediate return for your investment. Well, if you drafted Verlander, your faith has been rewarded thus far.

In 13 innings pitched over two starts this season, Verlander has allowed just one earned run, has 15 strikeouts compared to just three walks, and even managed to pitch eight innings in his last start in Seattle. Simply based on the results, he checks out as the same pitcher.

However, the results are not what we should be focusing on. Rather, I’m more concerned about Verlander’s underlying characteristics of him as a pitcher. How hard is he throwing? What does his pitch mix look like? These are the main questions that will allow us to identify what we can expect from Verlander moving forward.

In that regard, there is a lot of positive news for me to report. Verlander’s average fastball velocity (94.6 MPH) is right where it was in 2019 (94.9). Meanwhile, his pitch mix is ​​right where it has always been:

That is essentially identical pitch usage to what he had before, which is a good sign; he has the feel for his breaking balls, rather than having to rely too much on his fastball- this is common with pitchers who are still injured. There is nothing to suggest that he isn’t back on his 2019 form based on this.

The armory isn’t the same, however. In fact, Verlander has made some interesting tweaks to his curveball. Here is what it looked like in 2019:

As you can see, Verlander’s curveball now is coming in softer (about two MPH slower). It’s got more drop than it had previously and creates more separation from his slider, which is a good thing; his curveball de el has n’t been the most effective pitch for him in the past in terms of inducing whiffs.

Really, my only concern with Verlander whatsoever is his current 31.9% strikeout rate is a bit unsustainable. See, that strikeout rate has come with a decreased 12.6% swinging-strike rate and 28.1% called-strike-whiff rate (CSW%). Thus, per my expected strikeout metric (explanation here), he rates notably lower (25.1%) in that regard than his actual strikeout rate.

Yet, with his arsenal the exact same as it was previously, I’d expect more whiffs to come over time. I’m not expecting him to have a 35% strikeout rate again, but he may be able to maintain this strikeout rate, just in a more sustainable way moving forward.

Outside of Clayton Kershaw, there is no current pitcher more qualified for the Hall of Fame than Justin Verlander. At 39 years old and coming off not pitching for essentially two seasons, he is trying to do something unprecedented. Yet, this wouldn’t be the first time he tried to accomplish such a class.

It’s been quite a career for Verlander, and I really enjoyed breaking it all down. It’s astonishing that he could take two years off and be the same exact pitcher in terms of arsenal, but here we are.

Really, the only question is if it can hold up. 130 innings was what Verlander needed for his mutual option to turn into a player option for next season, so that seemed like a reasonable expectation for him. Right now, it is going well, but with every start, we’ll have to just pray there are no injuries that get in the way. He’s a solid hold in fantasy leagues and potentially a trade target if the Verlander owner in your league is skeptical.

Verlander will be in Cooperstown very soon. For now, though, he’ll continue to defy odds in a way that few players ever have. At this point, how could you not bet on him?