Celeste Huck slurped Thai chicken soup straight from its container as she walked on State Street in Montpelier. Though Huck was eating her lunch from Wilaiwan’s Kitchen on the go, she paused on her way back to work to read poems posted in the window of Botanica Florals.

The poetry is part of PoemCity, Montpelier’s annual spring initiative in which hundreds of poems are posted around town. Huck said she always takes time to read the poetry on display in her hometown in April, which is National Poetry Month.

“It slows me down and gives me a little window to go into reflecting on the beauty of the world,” Huck, 31, said. “The poems also remind me that we’re a community.”

This is the 13th year of PoemCity, which is organized by the Kellogg-Hubbard Library. The event includes poetry readings and other programming throughout the month. But its defining feature is scores of poems written by Vermonters, papering the town.

Appearing in storefronts among menus, advertisements and products, the poems are easy to spot because each is printed on an 8-by-17 sheet of paper with a blue heading that reads “PoemCity.” This year, 205 poems are posted around Montpelier; some are written by schoolkids, others by published poets.

“It’s a great thing,” Burlington poet Greg Delanty said. “I love having poems where people will see them.”

His poem “Formicidae” is in the window of AroMed Essentials, a CBD and aromatherapy shop on State Street.

“It’s wonderful for me, and it’s wonderful that poetry is out there and part of the community,” Delanty said, adding that Poetry Month, like Earth Day, is something he celebrates year-round.

Some poems are located at outlying sites such as Hunger Mountain Co-op, Hubbard Park and the Berlin Mall. But viewers can find most of them in buildings on State and Main streets while walking through town — from Chill to the Skinny Pancake, from Walgreens to the library—a kind of scavenger hunt to see. The poems are accessible to walkers, shoppers, workers, soup slurpers and “street peepers,” as Tanner Cameron calls the people who stop to read the poetry on the windows of the AT&T store where he works. 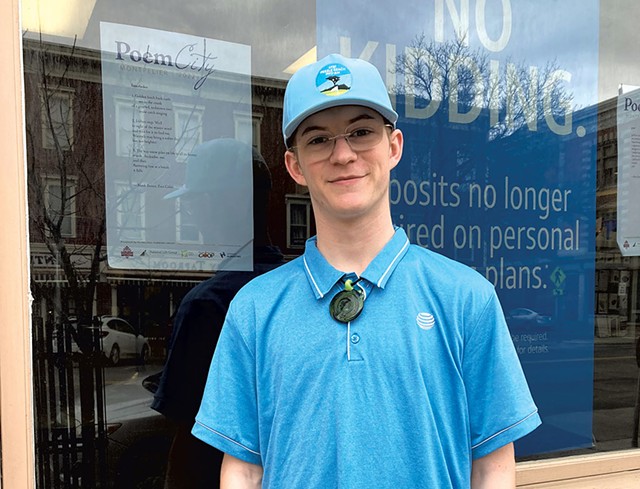 Cameron, 22, of Riverton, said he and a coworker read the poems during their lunch break before posting them in the Main Street store. He was pleased to discover that “Interludes” by Mark Brown of East Calais was “really relatable.” The poem makes Cameron think of wintertime on his porch, with his mittens and a mug of coffee to keep him warm.

“I think they’re cool,” Cameron said of the poems. “It keeps people’s minds moving. It keeps their heads ringin’, as Dr. Dre would’ve said it.”

Coming from a person who works in a phone store, Cameron’s use of “ringin'” suggests a poetic understanding of the event.

PoemCity started in 2010 and was conceived and organized by Rachel Senechal, who has since retired from the library. East Montpelier resident Michelle Singer worked with Senechal on the project for several years and now oversees it as Kellogg-Hubbard’s adult programming coordinator.

Her poem “I Love Rivers Best of All” is at Artisans Hand on Main Street. “I started as a participant,” she said. “And a very grateful one.”

Singer attempts to match poem to place. For example, a poem by Roberta Harold of Montpelier titled “The Octopus’s Garden,” which echoes the name of a Beatles song, is in the window of Buch Spieler Records on Langdon Street. M. Fraser’s “New Watch,” quick and clear, is posted at Katie’s Jewels on State Street. You can read the Montpelier resident’s poem in less time than it takes a second hand to complete its course around a watch face. (And probably faster than you just read the previous sentence.)

In the window of Bohemian Bakery, at the corner of State and Main streets, is a pair of poems that’ll make you want to step inside for a snack. Give a hand to Sarah Rejoice Brown of Essex Junction, who wrote “Java Jargon,” and Alicia Hingston of Danville, who contributed “Commonsensical Cupcakes,” for inspiring a coffee and cake break.

Inside the bakery on a pair of blackboards by the door, its slogan is written in English and French: “All the butter / All the sugar / All the caffeine / All the time; Tout le beurre / Tout le sucre / Tout la cafeine / Tout le temps.”

The words in both languages ​​contain poetic features in their rhythm and repetition. This is one of the neat things about walking around Montpelier reading poetry: You notice hints of poetry in other writing.

Poetry and walking go together, according to Jay Parini, a poet and professor of English and creative writing at Middlebury College.

“The rhythm of walking creates a rhythm in the head,” Parini wrote in an email. For a poet, he continued, “that rhythm becomes a particular poem.”

A notable poet-walker was Robert Frost, Vermont’s first poet laureate. Parini, author of a Frost biography, wrote in his email that after Frost gave a reading at Middlebury, he asked a student if she’d like to go for a walk.

“How could you say no to that?” Parini wrote. “But she never expected he would walk, with her de ella, to Bridport and back — perhaps eight hours of walking!”

An hour or two of walking — depending on speed of foot and mind — is enough time to enjoy a poetry stroll in Montpelier. In your wanderings, be sure to hit the liquor store to read “Lamentation of Another Evening Wasted” by Ralph Culver, a poet who lives in South Burlington.

You might feel like going “down to the banks of the Yangtze in the awakening dawn” after you read Culver’s poem. But you could settle for a barstool at Three Penny Taproom, a few doors down from Yankee Spirits and the site of two poems and 24 taps.

Montpelier is the part-time home of Louise Glück, who in 2020 won the Nobel Prize in Literature. She’s a former Vermont poet laureate, a title she held in the 1990s, pre-PoemCity, when Glück lived in Plainfield.

Talking by telephone from California, Glück said she hasn’t seen PoemCity but she thinks it’s “a lovely idea.” She has not used for National Poetry Month.

“I rather deplore the whole poetry month thing,” she said. “I don’t like to see poetry advertised. I think it’s undignified. Poetry has survived many periods of desecration and illiteracy. And I think it will survive this one.”

But Glück employs a double standard when it comes to Montpelier.

“I love Montpelier,” she said. “So anything it wants to do is fine by me.”