Two Jamestown authors and a neighboring South Kingstown writer will read their literature in a nod to National Poetry Month at the North Road library.

Wayne Cresser and Jay Primiano, both of Jamestown, and Matunuck poet James Geary will read from their anthologies at 6 tonight. For Cresser, it will be his first public performance since the coronavirus pandemic arrived in March 2020.

“It’s been too long since we’ve gotten the spoken word out in front of a group of people,” he said. “I’m going to be thrilled that it’s happening at all.”

Cresser, who has lived in Jamestown since 2013, will read from his latest collection, “Here Comes Herodotus, Again! (and other microhistories).” He has been a writer, journalist and professor for more than 40 years, including a stint from 1978-91 when he worked as a freelance journalist covering music, film, pop culture and sports for Spin magazine, Trouser Press, Yachting World and The Providence Journal. Cresser was a professor of English literature at Dean College in Massachusetts from 1989 to 2017, and it was during that tenure when he co-founded the literary magazine Shaking Like a Mountain, which was online from 2007-11. His short fiction about him has been published by the University of Rhode Island in the Ocean State Review. 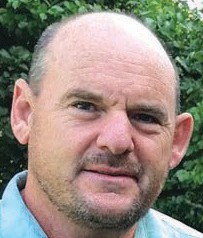 Cresser pitched the idea to the Friends of the Jamestown Philomenian Library when his “Here Comes Herodotus” chapbook was released in June 2021.

“I was going to get the book out there at the end of last year, but then the virus took whatever traction I was gaining, except for online traction, away,” Cresser said.

After events began to return to normal as Omicron receded, Cresser recruited Primiano about being part of the event, and then Primiano solicited Geary. Primiano and Geary co-created a poetry group called the Rhodeo Poets.

“It’s National Poetry Month and they’re both poets,” Cresser said. “It was like a puzzle that came together.”

Primiano, a Jamestown resident since 1986, has had his poetry and fiction published, including co-writing the young adult novel “Swim That Rock” with his friend, illustrator John Rocco. The book, which was released in 2014, is about a teenager living in Warren in the 1980s and his attempt to find his father, who was lost at sea. The novel earned a positive review from the New York Times, and was named the Rhode Island book of the year. Primiano has since finished two more full-length manuscripts that are awaiting publication.

Rhodeo Poets was established in 2019, and Primiano said the group survived the COVID-19 pandemic by meeting through Zoom. The group meets bimonthly via video conferencing or in person, depending on public health guidelines at the time.

“It’s been a really powerful experience getting to know these people,” he said. “It’s really become a wonderful part of my life.”

At the library event tonight, Cresser will read two pieces from his book, which is a short collection of around 40 pages. The publication features flash fiction, which are short stories of less than 1,000 words, and the book has 14 in that style. One of the stories Cresser will read is the collection’s title story about a man who is a fan of the ancient Greek historian Herodotus, dubbed “The Father of History.”

“It’s almost to the point where he ignores his family,” Cresser said. “The kid has something that he needs to express about going away to college. The title story is about generational conflict involving the son and it involves a history book.”

The book features motifs in its stories, including life from youth, adulthood and old age, and stories that take place in the morning, afternoon and evening.

“I tried to keep those motifs alive through everything I included,” Cresser said. “These are the stories I put together with those motifs in mind.”

“Heroditus” was published by OPEN: Journal of Arts and Letters, and some of those stories had previously appeared in the periodical. He also plans to read a longer short story that is not in the collection.

Primiano said his poetry is often story-like, reflecting his interest in telling stories. Although he and Geary will both read their poetry at the event, Primiano also plans to read a piece of short fiction called “1968,” a year in which he was 8 years old.

“It’s from the perspective of a young child,” Primiano said. “I think that would be an interesting piece and quite revealing.”