What is the benefit of learning an instrument as an adult? Does it make you smarter? Do you age more slowly?

But that isn’t really how it works. Are there benefits? The short answer is yes. The long answer is, it depends on what you want to get out of it.

‘Greater than the sum of the parts’

Gabriella Ilie has a PhD in psychology and neuroscience, specializing in cognition and emotion. The Dalhousie associate professor’s primary appointment is in community health and epidemiology, with cross appointments in three other departments, as well as a chair in prostate cancer quality of life research. 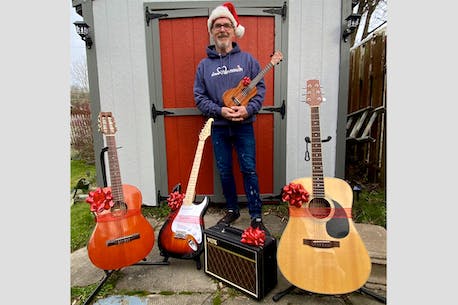 Based on these credentials alone, when we spoke I expected her to explain the benefits of learning an instrument in relatively clinical terms.

“Why is it that music inspires us and opens our hearts? Because we see something greater than the sum of the parts.”

That doesn’t mean learning to play an instrument comes without concrete benefits, however.

“We’re never too old to learn. And, in fact, for us to maintain our brain’s health, we should engage in learning new activities. Learning how to play a new musical instrument, learning how to dance, learning how to speak a new language. Because that which is not being used is being lost.”

Ilie points out that learning music can help people maintain their ability to decode speech prosody, the melodic component of speech that helps us determine the intent of the speaker or the difference between a question and a statement.

Playing music can also relax us, reducing the physical impact of emotional stress on the body. It can help with symptoms of depression.

But the way music helps is not the way a drug helps; it doesn’t block a receptor or make up for a chemical deficit. Learning an instrument helps in itself because of the way we respond to music and to learning.

“We maintain and we keep alive that which we tell our bodies to do. And we make choices,” says Ilie.

“We’re never too old to learn. And, in fact, for us to maintain our brain’s health, we should engage in learning new activities. Learning how to play a new musical instrument, learning how to dance, learning how to speak a new language. Because that which is not being used is being lost.”

Halifax resident Scott Croucher had loved music virtually his entire life before he finally decided to learn an instrument once and for all about 10 years ago, when he was 57.

“I’ve been a music geek since I was nine and I saw the Beatles on Ed Sullivan. It was one of those life-altering moments for me,” says Croucher, now 67. “So I’ve been a pretty serious fan.”

Croucher tried many times throughout his life to engage with music as more than a listener and collector. He played the recorder as a kid – “the recorder was not considered a very cool instrument,” he remembers – then he tried to pick up the trombone in high school – “a brief affair,” he adds.

He tried guitar and piano more than once, but never stuck with it.

“But when I was 57, give or take, I saw a notice in the Herald about an organization called Second Chances, run by Paul Barrett. And it was for people over 50 who had either never played an instrument or who had played in school and had stopped playing for whatever reason, to learn to play or learn to renew the acquaintance,” he said.

At his orientation session, Barrett offered Croucher a selection of instruments. The alto saxophone spoke to Croucher, in that immediate and unconscious way the things we fall in love with often do.

“I tried the alto and man, it was just almost love at first noise. And so that’s what I did, I took the high and really it came down to deciding that it was now or never. I was in my late fifties and I thought, `If I’m going to learn to play music, this is it.’”

James Shaw has been making his living from music in Halifax since 2015 as a performer and teacher. He started learning music relatively late, around 16 years old. That means Shaw can vividly remember learning to read and play music, which helps inform his teaching of him.

“I remember the day I learned what the note C was and how to play it on the saxophone,” says Shaw. “Or the eureka moment of what it sounds like to play in tune or hear a note for the first time.”

One of Shaw’s projects, the Jazz Music School (which Croucher also plays in) brings together amateur musicians to put together shows featuring music by legends of jazz, like Charlie Parker, Vernon Duke or Charles Mingus. Many of the players in these bands learned some music as kids but put down their instruments for decades after grade school. Some are learning an instrument for the first time.

“It’s a real challenge as an adult because you’re essentially looking at a new language,” says Shaw.

“That can be a big hurdle to overcome, but I think as an adult, people pick it up quickly because it’s a fairly rudimentary language. There’s not too many exceptions, it’s a pretty well-oiled machine when it comes to music notation.”

Sure, Father Time is undefeated. We’re born, we grow, we plateau, we age, we die. That’s the shape of a long human life if you zoom out far enough.

Up close, things are much more complicated. Our minds and bodies change constantly, in some ways that are out of our control and in others that we can direct.

“That’s why I prefer the expression ‘growing older’ rather than ‘getting older,’” says Ilies. “Because I grow and I keep on growing and no matter my age I’m still in there.”

And she chooses to use some of that time with music.

“Every time I have a little bit of time, I run to my guitar,” Ilies says. “It’s so rare now, but I keep telling myself, like a kid, I’m still that same little girl. I haven’t changed. I’m still in here. I’m looking forward to trying and connecting with that instrument.”

Shaw sees the benefits firsthand: people making friends in his Show Band or Big Band groups and adults moving from learning how to pick up a bass to picking out a Charlie Parker song in front of an audience in just three years.

“I’ve read those stories where, as you age, you want to keep your mind active. And playing music is an example that people often bring up to do that. And perhaps it is helping me, but I just don’t know. But I derive my benefits from the pleasure of the music and the sound of it and the camaraderie of the ensemble.”

“I’ve seen little quotes and stuff like this, ‘music stimulates so much of the brain’, this kind of thing, and I know nothing about that aspect,” says Shaw.

“But I think if someone pushes themself and they get through that door, they’re in the building, [the instrument] is there and they make that first step, I think that anyone can join a band and play. I see it frequently from a band perspective how often people are growng. And I would hope that that would translate to other parts of their life as well.”

The benefits of learning an instrument, then, are the benefits that accrue from learning a skill, from being with other people who share that skill, and from sharing that skill with others. They are real, but quantifying them is like watching a movie one pixel at a time.

“I have no way of measuring what impact it’s had on my IQ or my mental facility,” says Croucher.

“I’ve read those stories where, as you age, you want to keep your mind active. And playing music is an example that people often bring up to do that. And perhaps it is helping me, but I just don’t know. But I derive my benefits from the pleasure of the music and the sound of it and the camaraderie of the ensemble.”