India and France share the churn of a journey called democracy, which has shaped artistic expressions in both countries. Photographs, films and literature are vehicles for different cultures at different times to communicate with each other and find contemporary resonance. They document what ordinary people thought and lived at that particular place and time. It is one such story of veteran photographer, Prof Parmanand Dalwadi, capturing the essence of the 1970s through his nine-month sojourn of Pariswhich speaks to us poignantly despite the digital flood of images around us.

Be it the abandon and free-spiritedness of an Indian and a French woman celebrating Bastille Day, carefree lovers finding their spot in a busy city, multi-cultural faces on the streets or eager protesters determined to be heard, Dalwadi’s photo essay on the ‘ 70s Paris reads the minds of everyday people in a changing world in an objective and unobtrusive manner, layered with a lot of empathy. Displayed last week at Delhi’s Taj Diplomat, the traveling exhibition is part of Bon Jour India, a cultural confluence of the Indo-French relationship.

Photographs, films and literature are vehicles for different cultures at different times to communicate with each other and find contemporary resonance. (Source: Bon Jour India)

Dalwadi embodies the spirit of this relationships, courtesy his association with the legendary Henri Cartier-Bresson. He may have completed his post-graduation in Visual Communication from National Institute of Design, Ahmedabad, in 1968 but his lens was shaped much earlier by Cartier-Bresson, whom he assisted when the latter toured India in 1965. In return, Cartier-Bresson took him to Paris to work with the celebrated Pierre Gassmann.

“I was in the city for just nine months. But every day I walked the streets with my Nikon F. I didn’t have any trick or formula. I just bled into the crowd and became invisible so that my subjects didn’t know I was taking their picture. It is not like I wasted shots. Films were very expensive those days, so I had limited roll. I had to be patient, waiting for that right moment of spontaneity, unconsciousness and spark of the purest, rawest emotion on my subjects’ faces. And I did that standing just a few feet away from them. For a perfect frame, the conscious and the unconscious have to meet,” he tells us. They document what ordinary people thought and lived at that particular place and time. (Source: Bon Jour India)

“It is not about technique but feeling the pulse visually. This is something that even the best digital camera may not get. Technology is good to add effects but the main frame must talk to you,” he adds.

In fact, it is this psychological approach to his human studies that makes Dalwadi’s images so absorbing and compelling that they stay with you. Featuring his wife, Radium, whom he met in Paris, the standout frames make a powerful statement. Like the one titled, ‘Women sit on the power of men’, that has women waiting at a bus-stop with the word manpower emblazoned behind them. The psychological approach to his human studies that makes Dalwadi’s images so absorbing and compelling that they stay with you (Source: Bon Jour India)

Or of a man calmly reading a newspaper next to a sculpture of a woman stuffed upside down into a pipe – a comment on the toxic patriarchy that allows such public artworks. Of course, ‘The Three Musketeers’ is a prize draw, overturning stereotypes with three women in androgynous clothing.

The series on protests, be it of pensioners and retirees, students or activists is a repetitive motif, with one frame celebrating a photographer precariously perched atop a lamp pole with his camera gear, attempt on capturing the streaming faces of protesters and slogans beneath him. Dalwadi recalls that protest culture was a part of French life in the 70s. So why is that culture waning in both France and India today? “That’s because these days we protest for the sake of protest without belief or clarity on what we want,” he says. 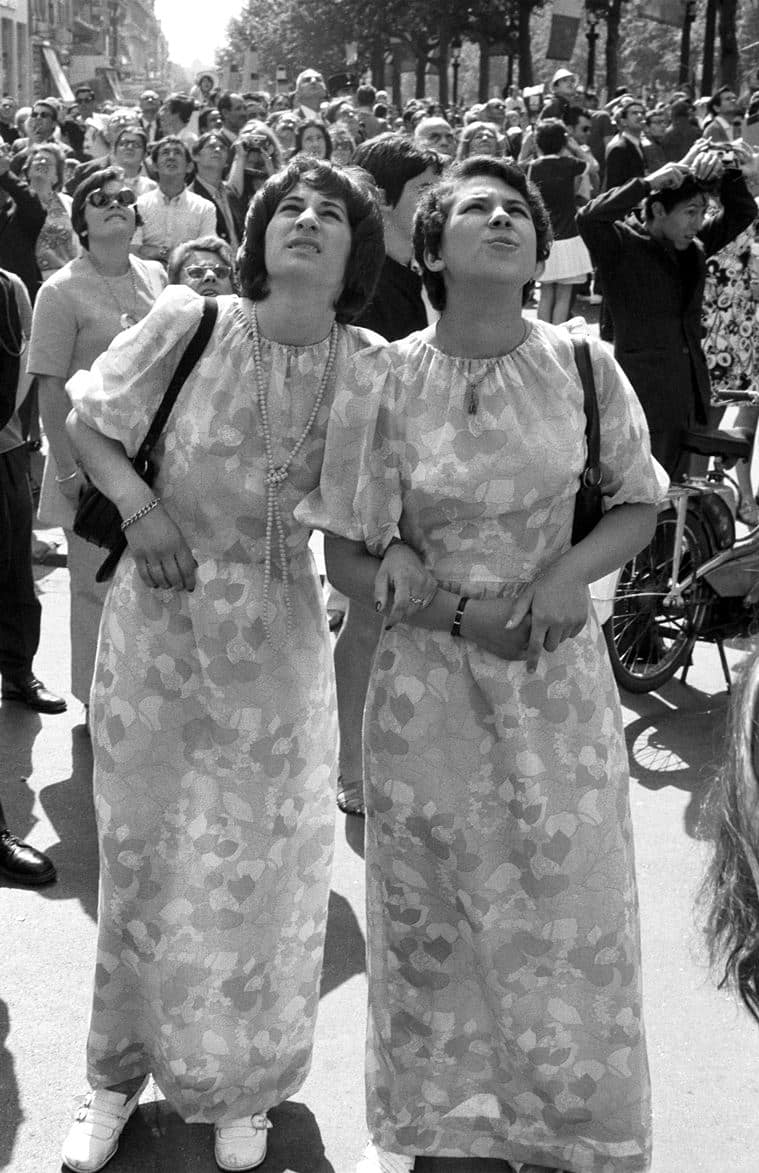 More human stories have been prioritized by Bon Jour India as part of the Indian edition of the Goncourt award. (Source: Bon Jour India)

Now as his exhibit travels to many cities, Dalwadi leaves us with a slice of life mantra. “Look for the positive in every city. That’s how we will find the resilient spirit of people.”

More human stories have been prioritized by Bon Jour India as part of the Indian edition of the Goncourt award. In France, this award is given to the “best and most imaginative prose work of the year.” And Francophones in other countries, too, get to choose their favorite as part of an allied Choix Goncourt (Goncourt Choice) awards. Today, students in 27 countries select the winner after reading four shortlisted titles in two intense months. Representative juries of nine Indian universities, including Delhi University, Rajasthan University and University of Mumbai, chose Mohamed Mbougar Sarr’s La plus secrète mémoire des hommes as the winner. It talks about the immigrant experience and the desire to go beyond the confrontation between Africa and the West. Pascal Bruckner, jury member, Académie Goncourt, and author, feels that French literature has been appreciated in India for the universality of content, be it of ideology, feminism, anti-colonialism and a meaningful engagement through one’s own language instead of being apologetic about it. Arguing for developing a reading habit the old way, he says, “The café culture, audio books and podcasts are there but they diminish the faculty of concentration and imagination. Books in the end are not meant to hide a bottle of whiskey on a shelf.” Dalwadi recalls that protest culture was a part of French life in the 70s. (Source: Bon Jour India)

Author and filmmaker Philippe Claudel, also the General Secretary of Goncourt, feels cultural intersections are important and French publishers have been aggressive about translations, making France among the rarest countries to have most of the world’s literature in translation. “In the US and the UK, only two per cent of foreign literature is available in translation. It would be wrong to dismiss the possibilities of sharing literature in the digital age. Each of us is probably writing more text in a day to express ourselves than we would otherwise. So that’s a virtue. And by making students stakeholders in deciding a major literary honor, we are helping them think in a world that’s dumped with decided opinions, judgments and slanted images,” he says.

Bon Jour India is continuing through the year in Delhi, Mumbai, Kolkata, Chandigarh, Jaipur, Hyderabad, Bengaluru and Bhopal; Dalwadi’s show is now on at Art Konsult