Published between 1968 and 1975, Adventures in Poetry was edited by poet Larry Fagin and printed and assembled at The Poetry Project at St. Mark’s Church in-the-Bowery. Featured in its pages is writing by many poets associated with the first and second generation of the New York School. Surreal and often playful, the work provides a valuable access point into a vibrant and social community of writers who overlapped both in life and on the page. We’ve gathered together a selection of works by some of the era’s most enduring voices.

“New England in the Fall: Autumn Gold” by Allen Ginsberg

Allen Ginsberg composed a number of auto poems in the 1960s while traveling cross-country in a Volkswagen with his partner, Peter Orlovsky. “New England in the Fall” is one of those poems, a cascading collage of images, thoughts, radio broadcasts, and other details. Ginsberg describes the process for constructing these poems in an interview: “So what I did was talk into the tape, transcribe into school copybooks, paying attention to where I took breaths, or where I clicked the microphone off and on, to find the end of the line, the verse line and then typed it up from the school copy books, and revised it…Most of the cross-country poems were composed that way.”

One of Anne Waldman’s most celebrated works, “Fast Speaking Woman” is a performance poem composed and improvised over several years. Scholar Amy L. Friedman describes the poem as “inspired by a Mazatec Indian Shamaness guide to the magic mushroom ceremony,” adding that it “celebrates infinite female potentiality in a dizzying release of language.” You can hear Waldman perform the poem here.

“To Norman, en voyage” is a cerebral arrangement of dream elements and questions that all converge on the longing one feels for a distant friend. Published posthumously, the poem is accompanied in the magazine by another poem by Joseph LeSueur, who was partners with O’Hara, and who lived with him from 1955-1965. In it, LeSueur outlines the circumstances of this poem’s composition: “Written August 7, 1959, the same day he wrote ‘Adieu to Norman, Bon Jour to Joan and Jean-Paul,’ both of them on the occasion of Norman Bluhm’s departure for Paris. I called frank at the MOMA that morning and suggested that he write a goodbye poem for Norman, whom we were meeting for lunch at Larré’s…”

Alongside poetry and art, Adventures in Poetry also includes a number of journal, diary, and travelogue entries. This one, from Lewis Warsh, provides a lens into the social lives, habits and daily life of a number of New York poets. 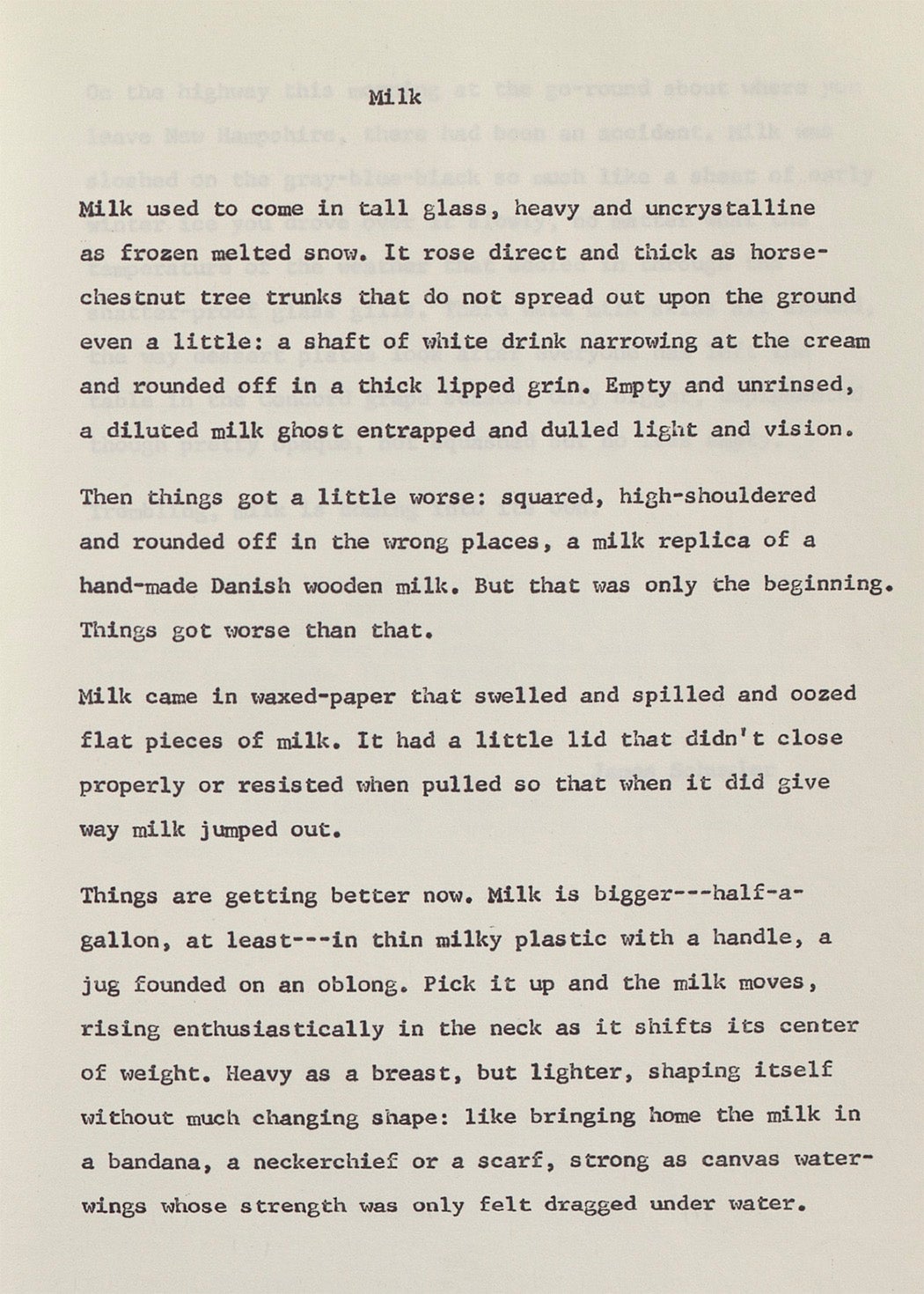 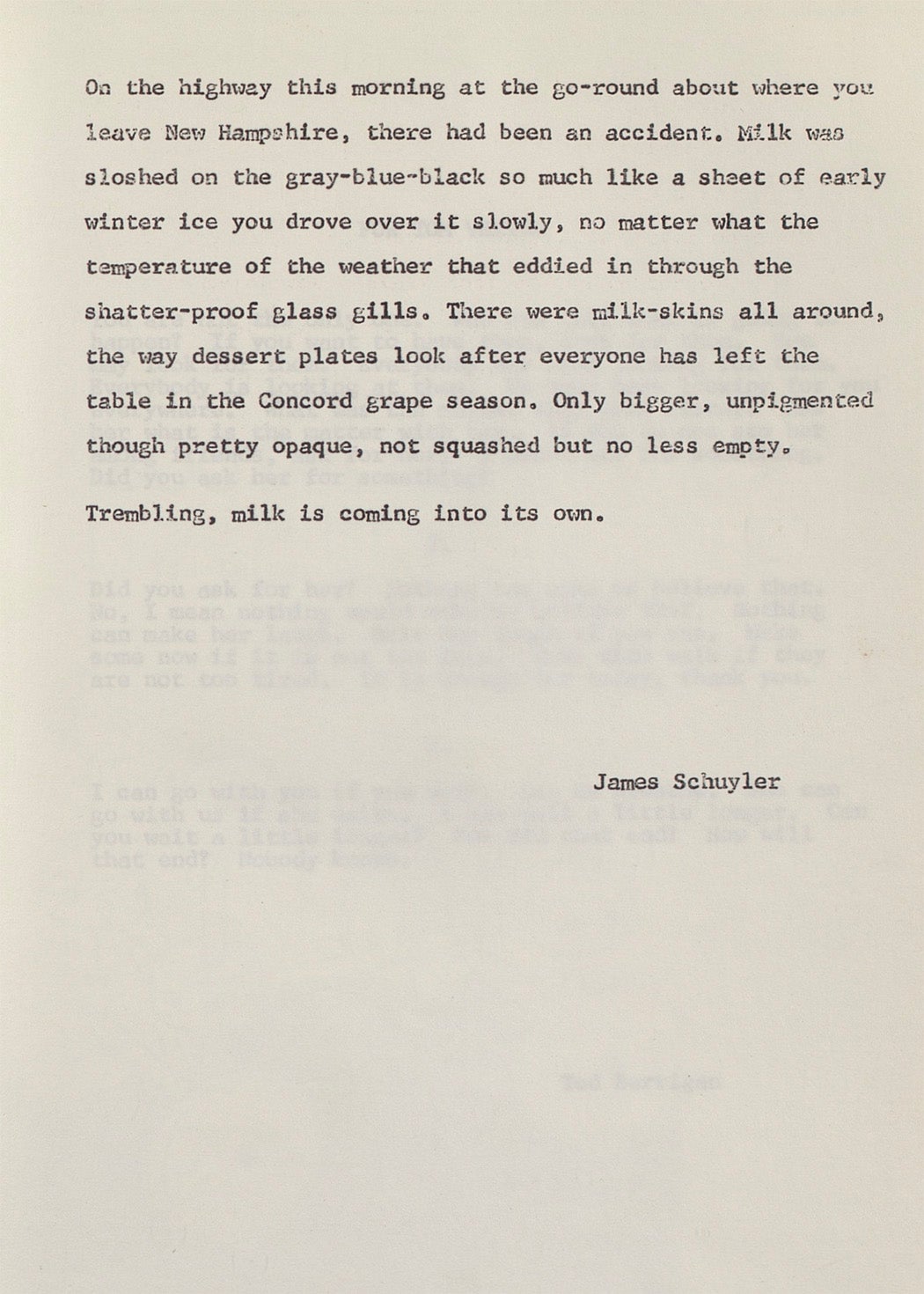 With an eye towards personification reminiscent of the French poet Francis Ponge, Schuyler describes the various vessels that have been used in recent history to transport milk. Eventually we learn that the poem was perhaps precipitated by the observation of a car accident. In an interview with poet Mark Hillringhouse, Schuyler remarks, “What I write about a great deal of the time is something immediate that I see, or something I think about that I’ve seen.”

“From Moving” by Bernadette Mayer

Bernadette Mayerpublished Moving in book form in 1971. Of its genesis, she writes, “Moving was written as an attempt to write only when absolutely necessary. I was certain I didn’t want to write out of a desire for a job, something to do, or, worse, love of being an artist. So whenever I felt compelled, I would type a page or so and put them on top of my desk… One day Anne Waldman came to visit and saw all the papers and decided to publish them.”

Joe Brainard’s “Life” begins with direct simplicity that evolves subtly through the poem from humor to acuity. Along with poetry, Brainard is also known for his drawings and comics, and was published frequently in Adventures in Poetry.

“Once Upon a Time” by John Ashbery

The poetry of John Ashbery often appears to unfold through a kind of dream logic, which, as critic Marjorie Perloff writes, “contains sentences that are grammatically correct but have indeterminate referents.” “Once Upon a Time” progresses colloquially from observation to resolution without every really adhering to any singular interpretation.

In “Reading Proust,” Ron Padgett describes some of the more relatable and straightforward elements of the experience of reading a novel, stopping to say what many people must experience without necessarily putting into words.

Part list, part diary, part elegy, “Ann Arbor Song” documents the moment Ted Berrigan first learned of the death of Jack Kerouac. He explains in a 1982 lecture, “when Jack died and I got the message in the middle of that reading, a man, another faculty person, just as it ended, brought me a little note and he said, “I have a note for you” (I didn’t know him hardly at all although I knew him by sight), and I said ‘thanks,’ you know, I was thinking it was something else.”