The Masters and Padawans take a much–needed break to participate in the Great Jedi Rumble Race!

It’s the most important event in the galaxy (probably) and there’s only one rule… THERE ARE NO RULES!

But Lula is too stuck in her own head to enjoy the raucous, no-holds-barred tussle to the finish line. 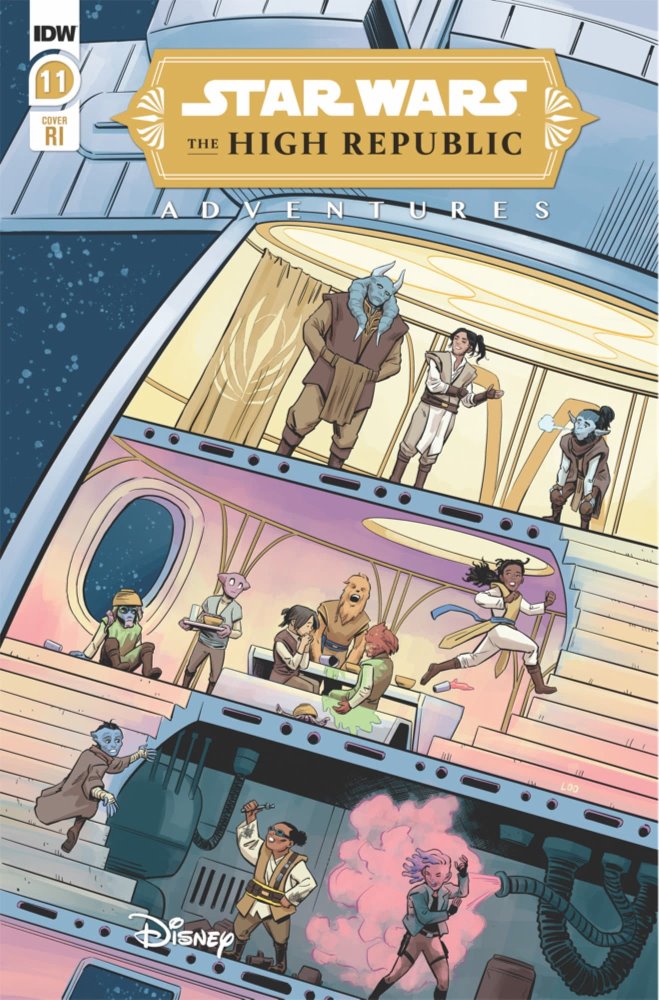 After pressure, pressure, pressure piling on the characters of The High Republic Adventures – indeed, almost everyone of that era across all of the various books, comics and audio books – it’s a welcome breather as the youngsters of Starlight Beacon (and Buckets o’ Blood) take part in the Great Jedi Rumble Race. Yes, it’s as frivolous and daft as it sounds, but after what these kids and their masters have gone through the last few months, it’s a much-needed break in hostilities before life gets serious once again,

Despite the brevity, there’s still plenty of meat on the bone. Lula Talisola meditates, hr mind conflicted on what it is she wants. Clearly, that involved Zeen in some way, but her thoughts are interrupted by the Rumble Race as Buckets O’ Blood explains the rules (there are none), and they prepare as we readers swing across the galaxy to Corellia where Krix and Sabata meet with Respriler to discuss Nihil matters there and on the world of Gus Talon where Sabata is managing matters. As Krix and Sabata part ways, she heads back to Respriler and the nuna fight where they begin their own conversations.

Back to Starlight Beacon and race preparations continue, Buckets reiterating there are no rules as in classic THR Adventures style we’re right back to Corellia and battling nunas watched by Respriler and Sabata as she makes clear her intent; Krix must die. The race is up and running on Starlight as Jedi run and scramble, while Ram Jomaram tears along on a modified droid, until he is knocked down by two padawans who ride off on it. Back to Corellia and a fascinating exchange as Sabata explains the psychology behind her plan, how the Jedi and Zeen would try to capture Krix, try to rehabilitate him whereas Krix would kill Zeen to hide his own weaknesses from him. She assures Respriler that Zeen and Krix will cross paths and we’re back to the races as the end is in sight and a surprise finish as Buckets uses a Force push to shove his opponents back and win the race for himself before diving into a plate of treats.

We end another vibrant issue with Respriler explaining the shortcomings of Krix to Sabata. They are on Corellia, a world in the Core, at the heart of the Republic and with his political connections and the power of the Nihil they could accomplish great things. We end with them looking down on what appears to be the Halcyon, or a vessel of its class de ella, and await the final two issues of this charming, beautifully crafted (tip of the hat to Harvey Tolibao) and energetic (thanks to writer Daniel Jose Older) series.