Kate Evans and Giselle Clarkson are on a mission to tell stories about science in Aotearoa through words and pictures.

They’ve embarked on a fantastic new series for New Zealand Geographic magazine, Just So, where they tackle the questions no one thinks to ask through an illustrated and written approach.

Kate does the words and Giselle does the pictures, although it’s never that simple.

They joined Sunday Morning to talk about selling science communication with jokes.

Rebekah White, the editor of New Zealand Geographiccame up with the feature concept that Kate and Giselle quickly came on board with.

“Now we have brainstorming meetings which mainly consist of the three of us giggling,” Kate says.

Kate writes on a particular topic which Giselle also illustrates with her cartoons throughout.

For instance, the March/April issue features the topic, “Why Can’t I Taste With My Feet?”

The result is a deep dive into the strange worlds of how humans and animals sense taste, accompanied by Giselle’s cartoons.

Giselle says she is enjoying the geographic assignment.

“When I’m reading Kate’s writing, every few sentences or every paragraph or something an image will just kind of pop into my head.

“I think my brain just makes visual jokes, that’s just what my brain does.

“What it actually comes down to often after I’ve read the article is actually whittling the jokes down a bit, to the ones that, firstly, other people will understand so I get out of the things that only I find funny, and getting ones that are going to balance nicely on the page.” 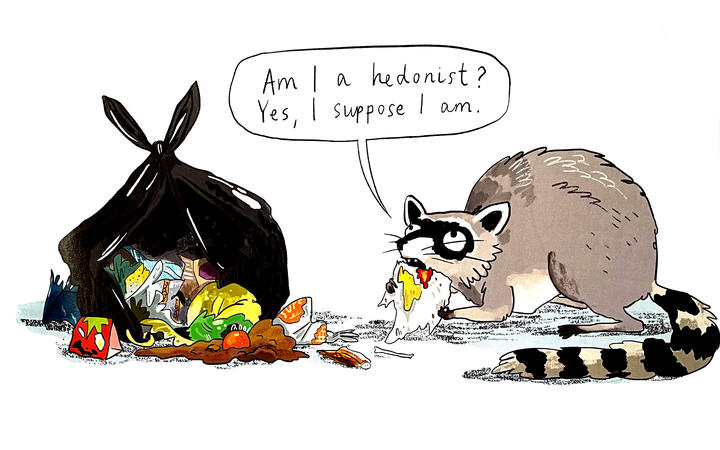 There are no shortage of topics to explore, Kate says.

“I’ve been finding out all kinds of things I had no idea about.

“I guess most of these columns begin with kind of one idea that we are amazed by.”

When she was reading a book on taste, she kept discovering fascinating facts that she wanted to explore.

Humans actually have taste receptors all over their bodies – including their feet, Kate says.

“The taste receptors have a particular form in the body … they’ve all got a form that you can actually see under a microscope.”

But the ones in the mouth are the only ones connected to the taste receptor in the brain, she says. Receptors elsewhere in the body might detect chemicals or other materials without alerting the conscious mind about it.

So how does one illustrate a science column about strange facts?

“I do try to steer away from jokes that are perhaps cliche or whatever as much as possible,” Giselle says.

“I’ve got an octopus there in the taste article because they taste with their whole body, so I’ve got this octopus sitting down there just a bit grumpy and saying, ‘That’s something to think about next time you pee in the ocean .'” 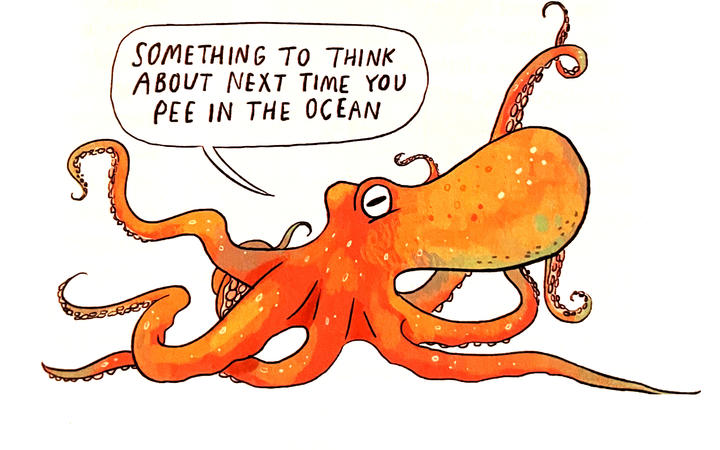 Kate is also working on a long-gestating book that uses the humble feijoa fruit as a springboard for a broader look at plants and humans.

“It’s not just about the feijoa really, it’s about human relationships with plants and the different forms that it takes, kind of the different meanings that they have for us in different contexts, in different times and through history and across the world.

“Feijoas are just kind of a pretty cool in, and one that I happen to be obsessed with.”

Some people love feijoas, and some can’t stand the taste, which goes to show how unique the senses can be, Kate says.

“This is actually a perfect example of the different ways we experience the world.

“There’s obviously something different in my taste buds compared with yours in that a taste is absolutely delicious to me and it tastes horrendous to you.

“And I think that’s what the whole Just Go project is trying to do. We’re talking about the fact that the world we see isn’t inevitable.

“If people come across some crazy amazing thing in nature that they’d like to know more about they can email editor@nzgeographic.co.nz,” Kate says.

“The overarching thing that we’re trying to do is show people some of the wonders of nature through these hilarious and bizarre creatures that we share this planet with.

“Underneath it all is this unspoken message that these are things that we could lose with extinctions and ecosystem destruction, but I’m just telling you that subconsciously while you’re giggling away about stick insects and crab spiders.”