Skip to content
WHEN HOUSTON ARTIST Mari Omori traveled to Yogyakarta, Indonesia, in 2018 to study the art of batik-making, she had no idea how life-changing the sabbatical would be.

In Omori’s contribution to the Consulate General of the Republic of Indonesia’s 2020 publication, US-Indonesia Relations in Wordsshe writes: “The strength and humility of my hosts, combined with the exquisite qualities of the island itself, and of course batik, transformed my soul in ways that I am still contemplating today.”

That transformation is the theme of Batiked Life!an exhibit of batiks, photographs and works-on-paper Omori created during her two-month residency at the Babaran Segaragunung Culture House. Batiked Life! opens May 7 at G Spot Contemporary Art Space.

Omori arrived in Indonesia at the end of March, the rainiest month of the country’s aptly named “wet” season. “Whether you’re sitting or standing you sweat profusely,” laughs Omori who, having grown up in Japan, another high-humidity island, quickly adapted to the soggy climate. Mastering the art of batik-making took a little more time. Omori initially struggled to control the trajectory of melted wax as it dripped from a specially designed pen onto intricate patterns drawn on a cotton cloth. After much trial and error, Omori gradually developed the skill to create ambitious, large-scale, and highly personal batiks like “Five Directions,” in which four pairs of bare feet frame the edges of what could be a rippling pool of water, or a deep blue portal to another dimension.

“It’s a strange title, isn’t it?” laughs Omori of “Five Directions.” “I wanted to make something large but personal. So I traced my feet while standing in a kind of meditative state.” While many indigenous cultures view the world as having four directions, each with its own symbolic meaning, Omori imagined a fifth direction she might choose on her journey de ella as “a spiritual being on a human path.” “Which way will I direct myself?” asks Omori. “Perhaps upward, not downward.” 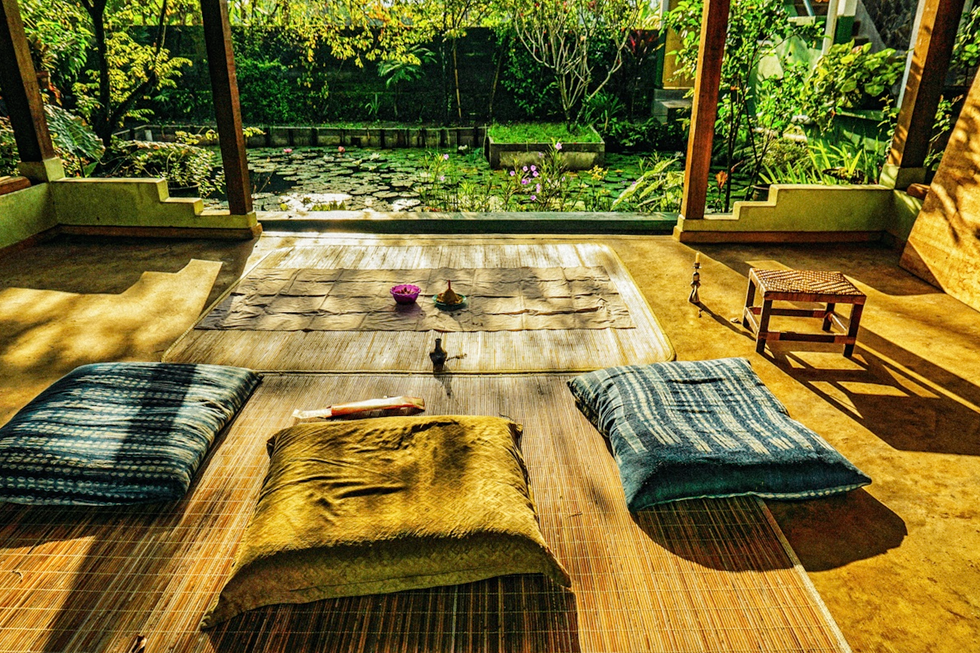 A photo Omori took of her meditation spot in Indonesia

Omori, who has taught art as a professor at Lone Star College-Kingwood since 2001, and whose works are in several private and public collections, is delighted to be presenting such a personal exhibit in a gallery described by its owner as “a space with a decidedly grassroots approach to cultural exchange.”

Batik Life! gives Houstonians the opportunity to discover the “nature, rhythm and process” of batik-making, and consider the spiritual nature of this centuries-old artistic practice.

Related Articles Around the Web