The main reading hall of the trilingual Biblioteca Alexandrina (classical Arabic, English, and French) comprises 20,000 square feet on 11 ‘cascading levels,’ as designed by the Norwegian architectural group Snøhetta. It has been named the winner of the 2022 Sheikh Zayed Book Award in the Publishing and Technology category. Image – Getty iStockphoto: Prakich

ANDgypt’s Bibliotheca Alexandrina and six literary figures, translators, and intellectuals are honored in the 2022 Sheikh Zayed Book Award—organized and administered by the Abu Dhabi Arabic Language Center (part of the emirate’s Department of Culture and Tourism) under the direction of Dr. Ali Bin Tamim.

The program has today (May 9) announced its winners in seven of its nine categories for this year, having received a record of more than 3,000 applications from at least 55 markets, 20 of them Arab nations.

This is the award’s 16th edition, allocating a purse of 750,000 UAE dirhams (US$204,215) in each of the eight book categories and 1 million UAE Dirhams (US$272,286) for the Cultural Personality of the Year laureate. The Sheikh Zayed Book Award is among the wealthiest portfolios of publishing-related honors in the world, worth a total of 7 million dirhams (US$1.9 million). All winners in the competition receive gold medals.

Today’s announcement covers the categories of:

Of the two remaining categories, the winner of the Cultural Personality of the Year honor is to be announced in the weeks to come. The ninth category, Development of Nations, is not being conferred this year, the program’s administration determining that submissions didn’t meet the award’s criteria in that category. 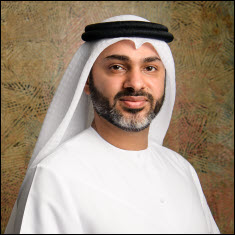 Saood Abdulaziz Al Hosani, undersecretary of Abu Dhabi’s culture and tourism department and a member of the Zayed Award board, is quoted this morning, saying, “Since its establishment in 2006, the Sheikh Zayed Book Award has grown to become one of the most prominent and prestigious literary and cultural awards in the region and the world.

“With the award’s 16th edition, we celebrate a diverse array of creators in various fields whose works have contributed greatly to the Arabic literary canon.

“I congratulate this year’s winners, whose brilliant work will contribute to sharing Arab culture with new audiences around the globe.”

And Bin Tamim, who chairs the Arabic Language Center and also is secretary-general of the Zayed Award, says, “With each edition, the Sheikh Zayed Book Award further advances the cultural ecosystem in the Arab world, highlighting brilliant works of intellectual, linguistic , and creative diversity.

“One of our main aims is to support creators, and it’s our hope that this platform will serve to introduce these authors to wider audiences, not only in the region but around the globe.” 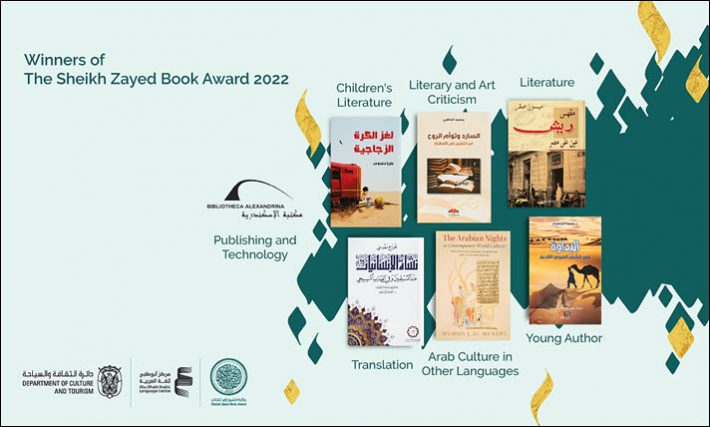 With each of the winners, we provide some of the explanatory rationale content provided by the award’s administration.

The award’s organizers say, “This book belongs to a type of storytelling that’s open to various genres, especially what’s known as narratives of place. Cairo’s Cafe Riche has deep cultural history and a broad creative and social heritage. The book combines history and narrative, which makes it a documented historical biography on the one hand and a creative work on the other. It also documents an important era in Egypt’s cultural history by examining the cultural and social transformations in modern Egyptian history and highlighting prominent intellectuals and creators associated with the cafe and the history of intellectual life in Egypt.”

The Sheikh Zayed organizers say, ‘This book addresses two issues, the international pollution crisis and some youngsters’ obsession with video games. It tells the tale of a 12-year-old boy who accompanies his grandfather on a train ride into the desert and embarks on a series of exciting adventures. The novel features captivating prose, a beautiful narrative, and a well-structured plot.”

The Zayed program’s comments: “The author of this book, Mohamed Al-Maztouri, presents a serious academic study of Bedouinism in ancient Arabic poetry. He discusses its diverse concepts and many manifestations, describing it as a culture with special landmarks and a lifestyle inseparable from its place, environment, and geography. The author explains how bedouinism became one of the pillars of ancient Arabic poetry, from the pre-Islamic period until the fourth-century Hegira, according to a clear methodology that relies on addressing bedouinism’s main topics and sub-themes.”

About Aladawi’s translation of Makdisi’s work, the program says, “This translation is clear, smooth, and well-controlled, revealing the translator’s deep understanding of the book’s concepts and terminology, which he conveys faithfully and accurately in Arabic. His translation of him avoids errors caused by misunderstanding the original text or falling into literal translation, which usually leads to weakness and ambiguity.

“The translator has excelled in creating a balance between faithfulness in highlighting the purposes and accurate connotations of the original text, and the keenness to adhere to the spirit, style, and aesthetic standards of Arabic. The importance of the book, however, lies in the scientific effort of the late George Makdisi to present a thoughtful academic study that chose a comparative approach aimed at reading the origins of humanism in the classical Islamic civilization, its literature, its culture, and the circumstances surrounding its emergence in the Western Christian world.”

Commentary: “This book classifies forms of self-narrative in general literary discourse, including diaries, letters, confessions, journals, self-imagination, and self-narration. The book is characterized by a smooth presentation, clear concepts, accurate analysis, a modern and comprehensive review, and reading of ancient and modern Arabic narrative works. Aldahi presents the complex relationship between writing, existence, text, and what they embody in the real self-representation and its transfer to the book.

Arab Culture in Other Languages

About this winner, the Zayed Award program says, “This academic work discusses the profound influences the tales of One Thousand and One Nights have had on modern-day global cultures. Al-Musawi provides a deep and ingenious analysis of the intellectual visions in the tales and their authentic narrative techniques for poets, novelists, critics, and intellectuals in the West. He also addresses the ways the text has been translated and the attempts to reimagine the tales in new cultural contexts.

“The author’s insightful readings are not limited to the presence of One Thousand and One Nights in traditional genres but go beyond that to analyze its influences in music, paintings, visual arts, films of various kinds, and political and digital spaces.” 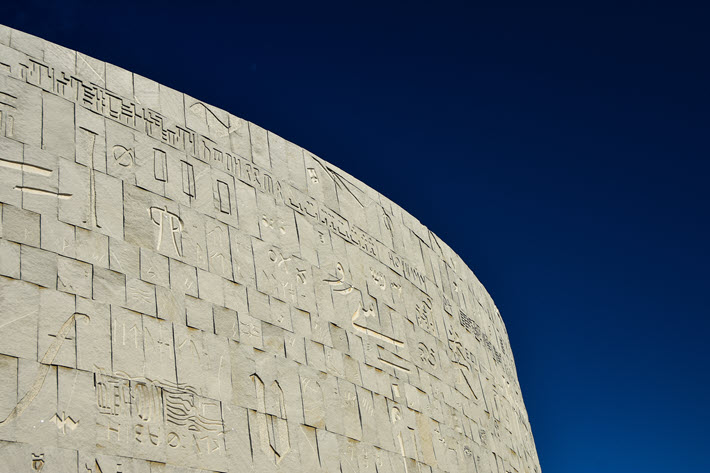 An architectural detail at the Biblioteca Alexandrina, opened in 2002 and now winner of the Sheikh Zayed Book Award in Publishing and Technology. Image – Getty iStockphoto: Prakich

Comments from the Zayed program: “The Great Library of Alexandria is a cultural legacy of the past and a revival of the Library of Old Alexandria.

“Inaugurated in 2002, this new library is the largest of its time and contains millions of books in multiple languages ​​and a digital archive that caters to the needs of readers all over the world. The ‘Embassies of Knowledge’ project has also created branches in Egyptian universities, providing resources and reference material to students, youths, and researchers.

Bibliotheca Alexandrina has also issued unique publications and contributed to cultural and artistic activity by inviting leading intellectuals to cultural conferences and seminars in person and online.”

You can review the 2022 shortlists here—in the Literature, Young Author, and Children’s Literature categories–and here, in the categories of Literary Art and Criticism, Translation, and Publishing and Technology.

Winners of the 16th Sheikh Zayed Book Award’s will be honored in an award ceremony at the Abu Dhabi International Book Fair which runs, in its 31st edition, from May 23 to 29. 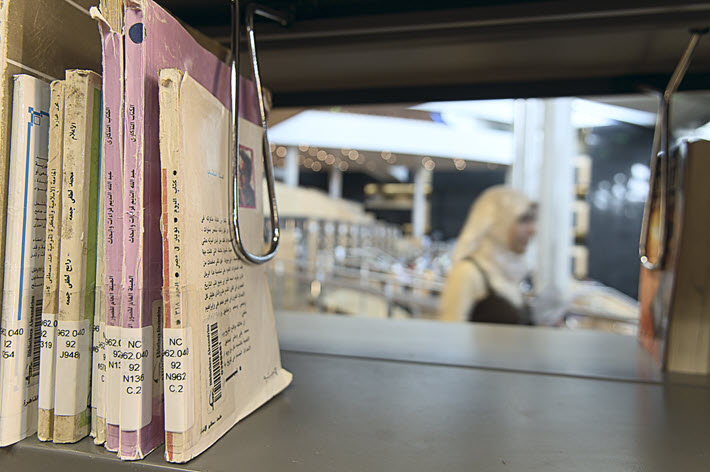 This is Publishing Perspectives’ 87th awards-related report produced in the 90 publication days since our 2022 operations began on January 3.

More from Publishing Perspectives on the Sheikh Zayed Book Award is here, more on Arabic literature is here, and more on translation is here. More from us on publishing and book awards in the international industry is here.

Publishing Perspectives is the world media partner of the Abu Dhabi Arabic Language Center and the Sheikh Zayed Book Award.