Jeff Boison has worked in publishing for the last 25 years, eleven of those at Random House where he was Director Of Sales, another six 1/2 years at DC Comics where he was Vice President of Publishing Planning and now another 6 1/2 years as Image Comics Director of Sales and Publishing Planning. But it seems not long enough to get the seven year itch. Last week Jeff Boison messaged out the following;

I wasn’t planning on sending anything out, but I guess there’s some grapevine, so I wanted to let you all know that I’m leaving Image and my last day is this coming Friday!

I’m leaving Image Comics for personal reasons (when I mentioned this to someone before, there was concern about illness or anything, and I swear everything’s totally fine and great!). Really though, I’m looking forward to spending some time on a few things that could use more time than I’ve been able to afford — and to give it my best effort, this move is what’s required.

Its been difficult to do this, because I’m so grateful to Eric for taking a chance on me and bringing me on almost 7 years ago after DC shut down the NYC offices — as a fully remote employee. Even though it’s since become the norm in our post-pandemic timeline, it was pretty tricky and took some getting used to for all involved. For a while I joked that as one publisher was turning away from a bi-coastal staffing arrangement, Image embraced it, and I think it worked really, really well.

I’ve really enjoyed working with everyone on this blind cc: and it’s been an absolute thrill to work to get your amazing works out to as many people as possible. I can’t wait to continue to see what you all produce and hope to run into you down the line at a con or wherever!

Feel free to keep in touch – my cell number stays the same (below) – and take care! -J

Most intriguing. It also comes just after Jeff Boison’s decision to put one of his own owned Bored Ape NFT images onto a variant cover to sell premium priced copies, which also lifted the lid on Boison’s considerable NFT investments and activities. Checking his Amazon author page… 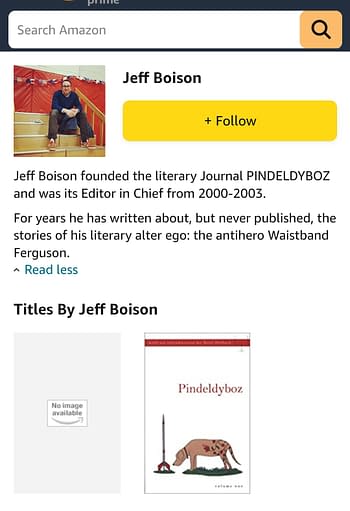 …reveals the name of his NFT-focused alter ego on Twitter, @WaistbandF. Could he have decided he’d rather avoid the scrutiny of a rather judgmental fanbase? Jeff tells Bleeding Cool that there will be “more soon…”