La Jolla resident Barry Jagoda was a television advisor and special assistant to Jimmy Carter in the White House and tells the story behind that story in his memoirs “Journeys With Jimmy Carter and Other Adventures in the Media.”

“In view of the forthcoming 2022 mid-term elections, Barry Jagoda’s insight and analyzes of elections and the role of traditional and new media are particularly pertinent,” said Wills in introducing Jagoda to his bookstore’s renowned Q&A local-author talks.

“Barry Jagoda was also an Emmy Award-winning writer and producer at NBC News and CBS News, including working with Walter Cronkite as a producer for the Apollo 11 moon landing and for Watergate coverage. Jagoda is an authority on the transition from traditional media to the digital world that now challenges candidates and elected officials.”

Jagoda is the first one to tell you he “lucked into” securing a spot in the Carter Administration. “I had come off five years of broadcast reporting in places like Croatia and Trinidad and Tobago,” he said, adding he then found himself in a “dream situation” when Carter aided Jody Powell told his friend Ed Bradley of “60 Minutes” fame that Carter was looking for someone with television experience to be on his team.

“Carter was campaigning in Iowa (first presidential primary) and Powell was traveling with him,” noted Jagoda. “Powell told Bradley, ‘We don’t really know anything about TV, we could use some help.’ And Bradley said, ‘I know a guy who might be helpful.’ 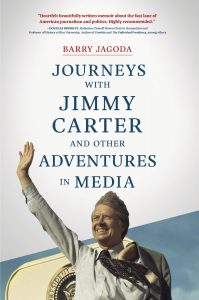 Which led Jagoda to a personal interview with the president-to-be. “Carter said, ‘I understand you’re a television specialist, how would you change me?’ And I said, ‘I wouldn’t change you, but I could inform you about what you said, or did, and how that would be received by the national and international media and television. So I hooked up with him. That was in 1976.”

Regarding Carter, Jagoda felt he was misperceived as being soft, characterizing him instead as “a very tough boss.” Jagoda was assigned by Carter once to pick an appointee and after he did Carter told him, “If that’s the best you can do, I could have done it myself. He was such a strong guy, that you had to be on your toes, or he wouldn’t approve of what you were doing. I had really good relations with him and he knew that I knew some things. That was really key to Carter: If you actually knew something – he’d pay attention to you.”

Of his first book, Jagoda said he knew he “had a good story” to tell about “politics and media in our time.” But the trick was to find how to make it marketable. “I was told, ‘You worked for Carter, put Carter in the headline.’ That’s the way it became Journeys with Jimmy Carter and Other Adventures in Media,” he said.

Key to Jagoda’s advice to Carter, and anyone else, is always to move toward the middle of the political spectrum. “I believe there are two positions, the moderate position, and the wrong position,” he said. “In that sense, both Carter, and now Biden, are trying to run to the (political) center. Biden’s got some of those same problems Carter had, big time.”

The 78-year-old author, who grew up in Houston, said his coming of age during the Vietnam War was “left him furious about the government” which led him to decide, “I’m not going to be a part of this . The war had turned me off from being a member of the establishment. So I went to journalism school to keep an eye on those guys.”

Looking ahead to this November, Jagoda noted: “If you’re a political reporter today what you’ve got to be thinking about is the mid-terms. And whoever is in power will probably lose a bunch of seats. The main issue in mid-term elections is turning out. Whether you’re Trump people – or the Democratic base – whoever gets the most turnout is really important.”