Norwegian writer-director Kristoffer Borgli comes to Cannes for the first time with his first fully fictional feature, Sick Of Myself, playing in Un Certain Regard. His first hybrid feature DRIB premiered at SXSW in 2017.

Kristine Kujath Thorp, who starred in ninjababy, and artist-turned-actor Eirik Saether headlining Sick Of Myselfwhich tells the story of a woman who makes herself ill to get attention when her boyfriend’s art career takes off.

Where did the idea for Sick of Myself start?
It’s sometimes difficult to trace. It was just a bunch of things that came together naturally. It was a story about a woman who really wanted a specific type of recognition in our culture we’ve primed everyone for seeing victims as heroes. I was thinking about how that could play an unhealthy incentive in the wrong hands.

Then there was a bunch of stories that came up after I was writing the script that confirmed that my idea wasn’t too farfetched. There was this author Dan Mallory, who had this whole career built on a lie as having cancer without really having it, and the Jussie Smollet case [of lying about being the victim of a hate crime.] Another element was just that I’ve always been very interested in body horror. And I wanted to see body horror in a more familiar environment

Was it challenging to obtain financing?
For some reason nobody said stop. We got funding, we got actors. I think people enjoy how far we’ve gone.

Did you ever have any self-censoring thoughts, thinking for instance her condition would be hard for an audience, or making her too unlikeable?
I was writing it more based on my own taste, and that I like these ‘unlikeable’ characters. Characters that break all moral norms and break all the boundaries that you’re not allowed to in real life. It’s a thrill to watch that type of character in cinema, or fiction in general. It’s a way to exorcise some demons. There’s something about exploring the darker aspects of humanity in a safe place like fiction so I was following my intuition and allowed myself to go there because I enjoy it. We were aiming for characters that weren’t necessarily likeable but were watchable.

Who was the genius behind SFX and makeup?
In the development phase of the project, I was looking for someone to partner to create the different stages of disease. We were free to invent our own medical condition. I found Izzi Galindo, a New York-based prosthetics designer who is a mad genius. He sent me a couple hundred of the most horrific images I’ve ever seen of real documentation of real skin diseases. So I said, ‘Maybe it has to be a little bit beautiful too.’ We spent a lot of time to try to figure out the perfect middle ground, horrific and intriguing. There were different stages of the disease we were showing so it could be up to seven hours in the makeup chair before even coming on set. It’s such a demanding role for Kristine and she really nailed it. 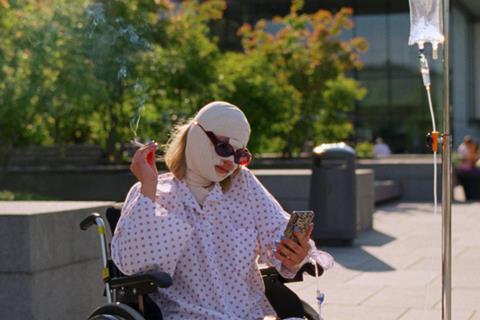 It’s quite a brave role for her to take on, especially at this point in her career when ninjababy really took off.
It’s not the most charming character to play. She had to show the most narcissistic, egotistical and the most flawed aspects of a modern woman who is petty and manipulative and conniving. That is quite the ask for an actress. But she really went there. And I needed someone with enough natural charisma and charm for the audience to accept this character.

Is Eirik Sæther a real artist?
He’s been a friend of mine for years, he’s a contemporary artist and he is not anything like this character but he found it very easy to tap into him. This movie was the perfect stage for him, and he helped me make it a more authentic representation of the art scene of Norway.

This feels like quite a different kind of project than DRIB. Did it feel like you were stepping up?
I feel like this is my first real feature. All my previous work has been more experimental so this is my first proper feature, and the producers really helped me set up this project so that I could really focus on the creative. It was a thrill to shoot this movie and it was a lot of fun ot make and a fairly smooth ride.

Let’s talk about the visual language you wanted to create, because it does reflect an attractive world of art and fashion.
I wanted to balance the horrific elements of the film with a beautiful language. The aim was to create a beautiful film that talked about horrible things. And I wanted to capture Oslo during the summer, which is so beautiful, so we made sure to shoot it on 35mm. Benjamin Loeb our DP that a fantastic job at capturing this kind of difficult story in a very visually appealing way.

How was it watching the film with an audience in Cannes, especially because it’s not a typical Cannes film?
It was such a relief to hear the laughter in the places I thought there was going to be laughter. And there was even laughter in places that were less expected, which was good. I can kind of sense that there was some confusion around where it’s okay to laugh. It was like some people started laughing and then other people followed. I think that is how the film is set up is that it is confusing when it’s a comedy and when it’s drama or a horror.

What’s your next project?
I have a feature in development that I hope to shoot this year in the US or Canada. I can’t say more right now.