The great, restless, wildly experimental poet Peter Finch has just published his Collected Poems, two substantial tomes weighing in at a thousand pages, both full of the fizz and energy that so typifies his humorous, splendid and impossibly inventive work.

A Finch poem has been described as ‘always a living object, a made thing, a pulsating machine made of words.’

His fellow poet Ian Macmillan, writing in the introduction to this landmark publication suggests that one way of explaining the enormous productivity which has produced, in turn, so many pulsating machines is that there is, in fact, more than one Peter Finch, indeed many of them working simultaneously.

I had a cup of tea with one of the many Peters before we went on stage at this year’s Hay Festival where I suggested that the publication of the Collected Poems was a chance to take stock, to consider his work over five decades and see the evolution of himself as a poet:…

Peter Finch: It’s an eye opener when you look back over your career and do so in a way that you wouldn’t otherwise – being selective because even though these are called Collected Poems you kick out things that really aren’t going to make it .

And how whole books produce just one poem, one poem that is going to survive and it’s your choice if it’s going to do so.

So I discovered how weak I often was, how inconsistent I was in the early part of my career.

The whole process was like getting into a time machine and traveling back to earlier decades, earlier eras of your life and reading things you haven’t looked at for, come on, for fifty years in some cases thinking did I really think that?

Or moreever you remember that.

I remember the people surrounding me, the circumstances that boosted me to do this, so it was quite an experience and an extremely lengthy experience, pulling together ghost pamphlets, forgotten pamphlets, books and booklets that hadn’t been opened for decades and decades, material that hadn’t even made it into the Selected Poems of mine from the mid 1980s.

But Andrew Taylor the editor of the Collected Poems was keen on reviving things that were even outside that frame – things which had appeared in small magazines that I had forgotten about and where the poems hadn’t survived, as I hadn’t kept them or sold the poem to the National Library of Wales and it had left my environment.

One of the key moments in Peter’s life as a poet was discovering a copy of Alan Ginsberg’s howl in to Society for the Promotion of Christian Knowledge bookshop but his delight in the vitality of language can be traced back much further.

Peter Finch: In school I was taught Walter de la Mare and I hated this and I couldn’t see what any of this was about at all.

But gradually I started to read, mainly science fiction as a teenager and reading obsessively and so I read the entire section of such books that were in the Roath Park Library, starting top left on the shelves and working my way right down to the bottom.

And I can remember standing in front of them once, staring at it and I must have been doing so for a long time because the librarian came over and asked if I could do anything to help me and I said I’ve read all of these , what else have you got? And that was a switch then and I had to go and look further in a wider field.

Peter started performing in the late 1960s, when he also started to bring out a magazine called Second Aeon.

While there is a popular image of the poet as a solitary figure, composing in a garret Peter, he was constantly collaborating with people, be they fellow poets or visual artists or musicians, sharing energy and creativity with them.

Peter Finch: I’d always looked for the sort of literary environment in which poets flourished, as described by Gary Schneider and Jack Kerouac in the Beat novels and many of the other Beat novelists – they seemed to occupy a world where sitting down over a glass of wine or beer and discussing literary matters was the norm: it wasn’t the norm for me in Cardiff so I asked where is this going on and I spend the early part of my career looking for it, hunting for this bohemianism, these fellow travellers, people who were the same as me, who liked the same kinds of things as I did.

When I found them then I wanted to do things together.

So from a very early start, with David Callard and Geraint Jarman we started to put on poetry readings in Cardiff.

Along the way Peter learned Welsh and even though he decided not to write in the language he found that acquiring the language was key to understanding the culture.

Peter Finch: It was phenomenally important. I didn’t recognize this, it sort of came up on me slowly.

But when you learn a language you are surrounded by other people doing the same thing and tutors who know the language and talk about it and the things surrounding it – the culture and then you find yourself warming to all things Cymraeg, all things to with Cymru , which is what I did and the further I got into it the more I found the more interested I became in the world around me.

And the world around me was not an entirely Anglophone, working class, coal-exporting environment, the city of Cardiff, there was more to it than that. 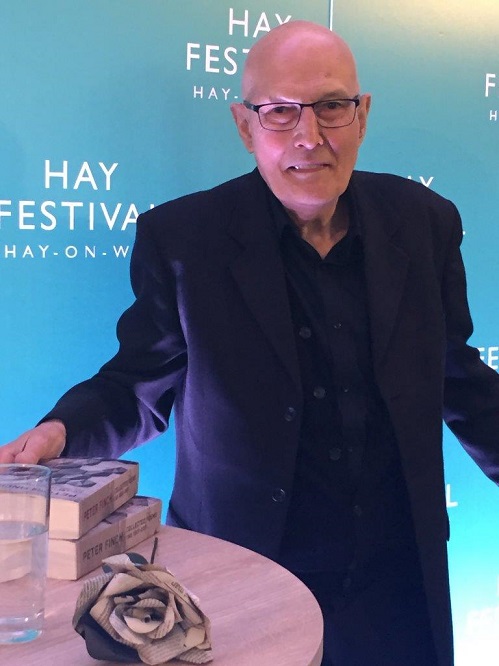 The publishing of the fast-paced, ideas-packed two volume Collected Poems isn’t the end of the story, of course, they are significant markers or milestones on a poetic journey that is already moving on as the machine churns out more material.

Indeed his next volume, diy punk handmade chapbook Just When You Think It’s Over – It Starts Again appears soon in a limited edition from New Jersey’s Between Shadows Press.

For the Peter Finch poetry making machine is seldom standing still, the wheels have to turn ere they rust.

For down time for this enormously efficient and productive machine is tantamount to silence and he’s not having any of that. He has so much more to say.

More stuff like this, an extract taken from one of Peter Finch’s best known and enduring poetic hits, ‘A Welsh Wordscape…’

To live in Wales,

Is to be mumbled at
by re-incarnations of Dylan Thomas
in numerous diverse disguises.

Is to be mown down
by the same words
at least six times a week.

Is to be bored
by Welsh visionaries
with wild hair and gray suits.

Is to be told
of the incredible agony
of an exile
that can be at most
a day’s travel away.

And the sheep, the sheep,
the bloody, flea-bitten Welsh sheep,
chase over the same hills
by a thousand poetic phrases
all saying the same things.

To live in Wales
is to love sheep
and to be afraid
of dragons.

Peter Finch’s Collected Poems are published by Seren. You can buy copies here.