Welcome to Week Eight! We more or less dodged any more devastating injury news in the starting pitcher world this week, but I’m sure there are plenty of teams out there starving for good starting pitching.

We had a few cases of breakout pitchers that we quickly identified early in the year, and those names continue to put up great fantasy numbers here as we enter June. We’re talking about guys like Eric Lauer and Kyle Wright. Those kinds of breakouts are tougher to find at this point in the season, but there are still plenty of serviceable and interesting starting pitchers available in tons of leagues.

Here are your starting pitcher fantasy baseball waiver wire pickups recommendations for Week Eight of the fantasy season (May 30th – June 5th). Let’s get to it.

Editor’s Note: Our incredible team of writers received five total writing awards and 13 award nominations by the Fantasy Sports Writers Association, tops in the industry! Congrats to all the award winners and nominees including Best MLB Series, NFL Series, NBA Writer, PGA Writer and Player Notes writer of the year. Be sure to follow their analysis, rankings and advice all year long, and win big with RotoBaller!
Read More!

It seems like plenty of fantasy managers have given up on Kirby after most leagues had someone rush out and add him after the call-up and that first good start. Two bad starts in a row (eight earned runs on eleven hits through nine innings against the Mets and Red Sox) had people panicking, and now Kirby is available in more than half the leagues out there.

What we love most about Kirby is the great walk rate (2.4%). The strikeouts have been about league average (23.5%), but that plays really well with so few walks. This was a calling card of his in the minor leagues as well, so we can count on that moving forward.

What is scary about Kirby is the limited arsenal.

You can see from that graphic that he’s thrown the four-seamer at more than a 50% clip. That has worked out okay for him thus far with the great 18% SwStr% and just two homers allowed on 173 pitches, but it’s hard to imagine that SwStr% is sustainable, and there’s not much of a fallback pitch.

His “slider” is absurdly bad with the 4.8% SwStr%. Even a mediocre slider will typically generate a double-digit SwStr%, and Kirby can’t even get to 5%. I think this is more of a “cutter”, but whatever it is, it’s not fooling anybody. The silver lining is the high ground-ball rate and no homers – that’s good to see, but the strikeout upside seems really capped for Kirby.

All of that said, I lean on the side of starting this man for now. The control is elite, and it’s certainly an above-average fastball leading his arsenal. Maybe he will improve on the changeup or curveball as we move forward, which could really elevate his game from him.

He was the leading man on this post a week ago, and then he went out and had another bad start at home against the Mets. He was very unlucky in that start, and his defense of him did him no favors. I’m forgiving that bad start, but this is like the third time this year I’ve had to say that. Eventually, we’ll have to get good results, or else we need to wash our hands of Cobb for 2022.

I’m certainly not getting out of the soap yet though, because Cobb has done this so far in 2022.

These numbers are all really, really sharp. You just can’t go long without strong fantasy results while posting the numbers in that table. I am trading for Cobb and starting him whenever I can get my hands on him.

He has solidified his spot in the rotation now with Freddy Peralta missing significant time. The lefty took advantage of that in a big way in his last outing on May 25th, giving up just one (unearned) run on four hits over 5.2 innings while striking out five.

Ashby is someone that we were very interested in the pre-season because he’s shown some seriously great stuff out of the bullpen in his career. So far in 2022, he’s posted a 26.4% K% with a great 33.4% CSW%. The bad news is the 13.5% BB%, which is quite alarming. We will need to see that improve to be fully confident, but he’s getting a ton of ground-balls (65.9%), which I love to see.

The strikeouts and ground-balls should stick, so even if the walk rate stays above 10%, you’ll probably still squeeze plenty of good starts of his while he’s in the rotation. The pitch count got pushed the whole way up to 91 in that last outing, a sign that the Brewers are willing to use him as a traditional starter to fill the Peralta void. He should be rostered.

The downside is that this has seemingly become a common thing for Rays pitchers. They’ll have a reliever transition to the starter role, look sharp for about a month, but then end up back in the bullpen. There are no guarantees Springs can stick as a traditional starter here, but he’s seemingly a must-start guy while we figure that out.

With Mike Clevinger hitting the IL, Martinez has re-entered the rotation as the Padres are clearly preferring a six-man rotation look. You would think he’ll be the first man out of the rotation if they decide to go back to a five-man, but for now, he’s making starts and performing well.

He has a solid 30% CSW% and a 24.6% K% for the year, and his K-BB% since May began is great at 21.3%. He has had a few bad outings, but for the most part, he’s been very solid. It’s encouraging to see how deep his arsenal is as well, as he’s thrown five different pitches this season and has thrown four of those more than 100 times (690 pitches total, so he’s above 15% usage with four different pitches).

Martinez is a pretty safe add while he’s in the rotation, but there’s a decent chance he’s not a long-term solution because of the logjam of starting pitchers the Padres have right now.

We’ve talked about him for at least three weeks now, so we’ll make this quick. He’s still walking too many hitters, but the K% is up to 32% over the last two weeks and he’s looked much improved after the bad start to the year. For the year the numbers are 26% K, 14% B%, and 48% GB%. I will continue to say that he needs to get the walk rate under 10% to really be a fantasy contributor, but it’s really encouraging to see the strikeout rate on the way up. 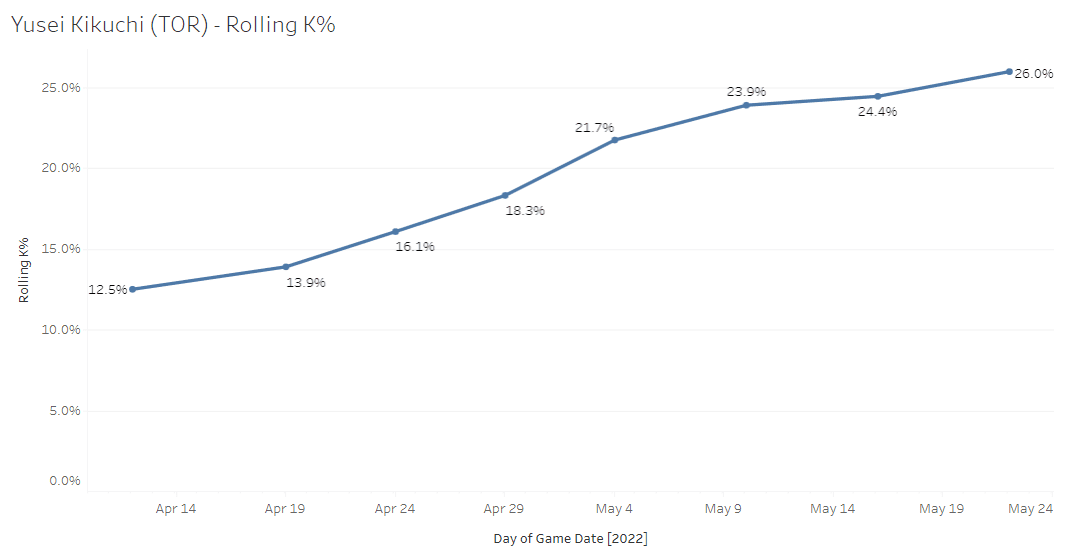 I was pretty excited about Gray before this disastrous start on Friday when he gave up five earned runs to the lowly Athletics. That bad start brought his season ERA to 5.56 and the WHIP is also ugly at 1.32. His strikeout rate also sits below his career average at just 22% and the walks have matched his career-worst mark at 9%. None of this is good, and it’s pretty much the opposite of what we expected from him as he was finally escaping Coors Field.

The reason for the speculative add recommendation here is that we just haven’t seen much of Gray with his new team, and the talent does seem to still be there, at least enough so to make him a fantasy-relevant starting pitcher as we move forward. The fastball has touched 97 this year and sits above 95 as the average, and his slider has earned a really high 20.5% SwStr% on the year. I’m giving Gray the benefit of the doubt here that he can improve as he gets his bearings as a Ranger.

Roansy took over Mitch Keller’s spot in the Pirates rotation and looked good in his first go at it early last week. He threw five scoreless innings against the Rockies (away from Coors, mind you) while striking out five and walking two. The strikeouts are not a concern – he has a 29% K% in the Majors this year and the same 29% mark in his time in AAA. He’s a strikeout pitcher no doubt.

The reason for skepticism is the walk rate, which is high at 10% right now. That has been a bit of an issue for him in the minors as well, and he’s not getting a ton of ground-balls to help mitigate those extra base-runners (43% GB%). He is pretty reliant on his fastball, which is a downer as well. All of this is to say that he will likely have a few disastrous starts here, with the walks coming across the plate after a long ball or two get hit. All things considered, the upside is huge with Contreras and you can get a bunch of strikeouts with him – and he’s completely free in 75% of leagues at this time.

Things looked really good for Silseth through two starts, but he fell pretty flat in his latest outing against the Blue Jays where he failed to record a strikeout while facing 18 batters. That start has brought his season strikeout rate below 17% with a walk rate above 10% – not numbers you want to see from a fantasy pitcher. I am willing to forgive a bad start against Toronto, and we did see a lot of encouraging signs in the first two starts, so I’m not giving up on him yet.

The good news is that he has generated a large amount of called strikes with the four-seamer (36% CSW%), a good sign for his command of the pitch. He adds onto that a splitter-slider combo that has been effective with swinging-strikes rates at 15% for each pitch.

Those three pitches make up more than 90% of his arsenal, but three good pitches are more than enough to have success in the majors if they are all good pitches. We need a lot more data to make definitive claims about Silseth, but it’s also good to see the elite 37.4% K% and 7% BB% in the minors this season (26 innings). I’d give Silseth an add in deep leagues.

Junis started this year as a long reliever, but he’s made a few starts in a row now and things have gone generally well for him. The CSW% is strong at 31.5% and the K-BB numbers aren’t bad either with a 19% K% and a 4% BB%. He has thrown more than 75 pitches in four straight outings now, so he’s stretched out enough to get you to that five-inning threshold to be eligible for wins.

One thing we have seen is the strikeout rate declining since he’s been asked to throw more pitches. This is a pretty common thing. Junis has had to calm down on the slider usage a bit since he’s being asked to throw multiple innings. I think the strikeout rate will likely be below 20% moving forward, but if he keeps a walk rate under 5%, he’ll be usable in this Giants rotation.

The young gun had his best outing of the year last week with five strong innings against the Angels. He gave up just one run on three hits and struck out a season-high seven batters.

That start brought his season numbers to a 19.7% K%, an 11.8% BB%, and a 39% GB%. None of those numbers are very good, but the improvement is good to see. One thing I’ve seen with Otto is solid swinging-strike rates. Here’s how the arsenal has broken down with those numbers shown:

Those are really strong marks on all of his pitches, and it has me believing that Otto can increase the strikeout rate and put up some strong starts for your fantasy team down the stretch.

Alrighty, I hope you enjoyed the piece and I hope some of these starting pitchers picks change your life forever and ever, for the better. So long!